Author: Watch out for 'the accident people' 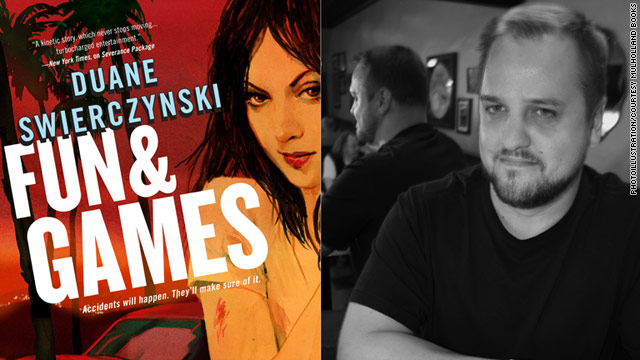 (CNN) -- If you prefer your prose pulpy, hard-boiled as a country egg and darker than a midnight shade of noire, then you may be ready for some "Fun & Games."

The new page-turner from modern pulp master Duane Swierczynski (pronounced sweer-ZIN-ski) hits bookstores Tuesday. Swierczynski is the author of several acclaimed crime thrillers, a regular contributor to Marvel Comics and has collaborated with Anthony E. Zuiker, the Hollywood mastermind behind TV's "CSI" on the series of best-selling, Level 26 "digi-novels."

His book reads like a Quentin Tarantino movie on speed, full of high-octane action, flying by at a breakneck pace, not for the faint of heart, but also with plenty of humor.

"Fun & Games" is the first book in a trilogy, about an unkillable ex-cop with a checkered past and a B-movie actress with a deadly secret. This pair of misfits is thrown together then hunted by a small army of mysterious hit men dubbed "the accident people."

While Swierczynski hails from Philadelphia, this book is set in Hollywood and takes advantage of a sunny locale loaded with shady people. The story starts with a white-knuckle car chase through the Hollywood Hills, grabs readers by the scruff of the neck and refuses to let go for the next 304 pages.

CNN talked to the author last week. The following is an edited transcript.

CNN: What led you to start a trilogy?

Swierczynski: "Fun & Games" is about an alcoholic house sitter who, one sunny California morning, finds himself squared off against the most lethal killers in the world. It's kind of a blend of "Home Alone" and "Die Hard."

The only reason that it's a trilogy is because I couldn't quite kill off the house sitter, Charlie Hardie, in one book. (He dies in the opening pages of the sequel, "Hell & Gone.") OK, I'm kidding about that. (Or am I? Hmmm ... )

When I originally pitched my editor, John Schoenfelder, I had a one-shot thriller in mind, but he asked if there was a way to build it into a bigger story. That's the sick genius of Schoenfelder; whatever you're thinking, he's thinking BIGGER. It's inspiring, in a demented sort of way.

CNN: Who are "the accident people"?

Swierczynski: I love books and movies about hit men. It just strikes me as the ideal job -- you set your own hours, you bring your own gear, you accept only the work you want. When I thought about the perfect hit team, it occurred to me that maybe they would have had experience in a different, yet related, field. I don't want to spoil anything, so I'll stop there ... but there's a specific reason these guys operate out of L.A.

CNN: Your novels have been described as high octane, brutal and smart but also with a sense of humor, sound accurate?

Swierczynski: Whoever said that is very kind, and I owe them money. But that's certainly the target I'm aiming for. If someone closes one of my novels before finishing, I consider it a failure. So I'm doing everything in my power to keep those pages turning -- even if I have to resort to fireworks and tap-dancing.

CNN: What led to your website, "Secret Dead Blog?"

Swierczynski: My love of noir and pulp grew right out of my teenage love of horror fiction (which I still love). The best genre thrillers show people pushed to their extremes, and it's fascinating to watch how characters deal with those extremes.

Secret Dead Blog started as a way to share cool stuff with friends, then turned into a place where I can hang with readers and show them cool stuff. I don't update it as often as I like; Twitter often robs me of my urge to blog.

CNN: You've also recently been involved in digi-novels and an e-story tie in to the "L.A. Noire" video game. Will we see more of that?

Swierczynski: Absolutely. I'll always be a sucker for new, shiny toys. I don't want to write the same book endlessly and then die; I'd rather be known as the guy who tried as many different formats and subgenres as possible. Even if some of those efforts are disasters.

CNN: Philadelphia features prominently in much of your writing, but "Fun & Games" switches coasts.

Swierczynski: Well, for better or worse, Philly is where my imagination goes to play. The more I travel, though, the more my imagination likes to hang out in other cities. This is how the L.A.-set "Fun & Games" came about; the story just refused to take place anywhere else.

Swierczynski: Such a great question, because I leave for a cross-country book tour/road trip in a few weeks, and I've been obsessing about which books to pack. Some of the definites:

-- "The Big Book of Adventure Stories," edited by Otto Penzler

-- "Claire DeWitt and the City of the Dead," by Sara Gran

-- "The End of Everything," by Megan Abbott

-- "The Damned Highway," by Brian Keene and Nick Mamatas

And a pile of comics and magazines and road atlases and travel guides. Of course, the joy of being on the road is the opportunity to pick up more books from many fine idea shops across the country. I may have to ship my children home separately to make room for more books.

Swierczynski: My first issue of "Birds of Prey," for DC Comics, will appear this September -- which is part of the companywide relaunch of every single title (all with new No.1 issues). If you're not familiar with the Birds, they're an all-female covert ops team who operates out of Batman's Gotham City. (I'm giddy just typing that.)

October brings "Hell & Gone," the sequel to "Fun & Games." And then in late December: "Dark Revelations," my third Level 26 thriller with Anthony E. Zuiker. It's been kind of a crazy year, now that I think about it ...