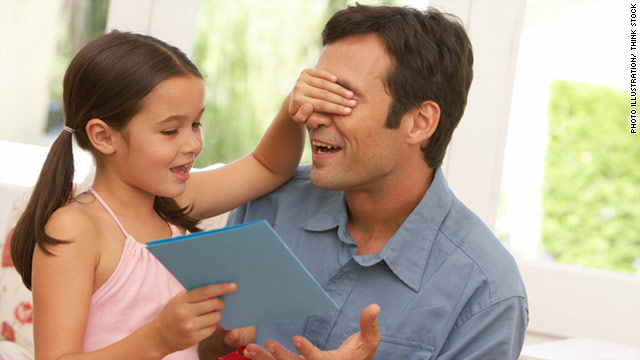 (Oprah.com) -- On a legal pad next to my father's armchair, I see my name in his handwriting. It's between "Atlanta tickets" and "taxes," on a list that also includes such excellent questions as "Sicily?" and "wine?" -- and it's crossed off.

And sitting in the half dark, with my own two children asleep in the next room, it occurs to me that the details of parental devotion are nothing you can quite put into words. I mean, you could stand all day in an aisle of Hallmark cards, reading four-line stanzas about paternal strength and character, and plenty would be true enough.

"I was an ungrateful louse, but you still sent me to college -- thanks," they assert in various rhyming couplets, with maybe something about ice fishing and neckties.

"You taught me to throw a football; you gave me away at the altar; you left our house with a briefcase every day and we never knew where you were actually going."

Sure. But where's the part about the flush of care you feel when you see your own grown-up self on your dad's to-do list?

You worry, you call me, you cross me out.

Because as a father there's none more devout

I would buy that card. Or the one about perching your little-girl self on the closed lid of the toilet to watch your handsome father shave -- his lips pressed together in the mirror while foam disappeared in wide stripes like a mown lawn.

Although I would want the card to skip the part about how, years later, your future husband would also use Old Spice, and the clovey smoothness of his cheek against your neck would fan the flames of passion into something more like a bonfire of heebie-jeebies.

And yet I was exactly the kind of kid who imagined that you grew up and married your own actual dad. (Did he still walk you down the aisle? What did your mom wear? I hadn't worked out the details.)

I wandered the house to be wherever he was: on the carpet at his feet while he rattled ice in a glass and shared pretzel Goldfish with me; on a kitchen stool while he soft-boiled eggs; flung across the bed with my chin in my palms while he emptied the pockets of his suit -- subway tokens, handfuls of change, a clacking box of mints.

He seemed like a cross between a magician and a billionaire philanthropist. ("Would you like a Tic Tac?" "Would I!") Plus, there was the omniscience.

Oprah.com: Are you turning into your father?

Even now, if we're heading downtown, he cheerfully shakes open the subway map to show us the L train, to remind us to get off the N before it zooms into Queens.

I watch his finger point here and there along the colored veins of the city, and I feel like we'll never be lost; I feel like if we were ever lost he'd come out to Far Rockaway and get us; I'm knocking on 40's door and I have two children of my own and what I feel like is somebody's kid.

"There's a great sushi place near there," he might recommend, or "I would take the Major Deegan," and his confidence fills me with something like relief crossed with something that can only be described as a kind of preemptive grief. I want to always feel like somebody's kid.

If he was in the shower when we left for school, he drew a circle and a dot on the fogged-up glass of the door for "goodbye." If we flew somewhere without him, he met us at the airport, always wearing the same red-and-blue-checked cotton shirt that jellied my knees with the gladness of seeing him again.

"Who do you love most?" I asked, "Robert or me?" And he said, "Don't be silly -- your mother, of course." He was not exactly kidding, and we screamed with indignation and glee: Our beautiful mother! We felt the same way!

Years later, though, our father would fall unpredictably and somewhat dottily in love with a brown Standard poodle. What a relief to raise a dog after the worry and complexity of children! Or so I imagine.

Opinions did not need to be proffered about the dog's tone of voice, length of shorts, or sulky posture at her grandmother's dinner table -- or about how close to her eyeball the dog penciled in a smudge of black liner.

The dog needed to be on a leash, sure, but not to keep her from growing up too quickly. And the dog was able to spend her whole life just wagging around our father in her needy way -- "Look at me! Look at me! I'm your dog! Aren't I great?" -- without even pretending to mature and make adult conversation.

You didn't want me to grow up too quickly

Only now I'm not sure I can at all.

Oprah.com: Men Who Behave Dadly: The life of the full-time father

These days I watch my own young children with their father. Our daughter rubs her cheek on his and complains dotingly about its roughness; our son curls up in his lap, big-kid legs folded up like a giraffe's. They reach sleepy arms from late-night car seats, and their dad lifts them, carries them, whispers "I've got you" and means it in every possible way.

Years later, maybe they'll roll their eyes when he counts the holes in their earlobes or frets over their berserk finances; maybe they'll rage and rebel and grow more independent than I ever have. But one day these kids, too, will scan the drugstore aisle for the right card that won't be there -- the one that says,

I know it's a pain in the neck,

But it means the world to me --

Your agreeing to live

Oprah.com: How does a daughter talk to her dad?