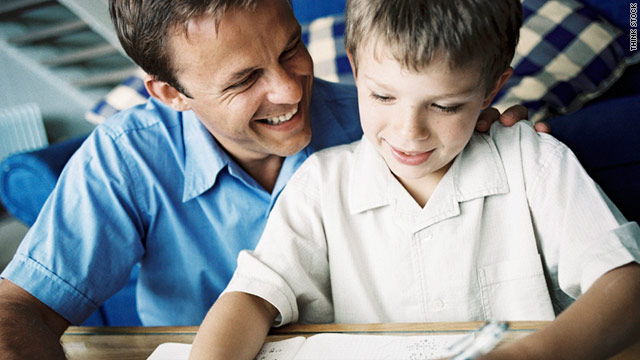 Fathers who live in the same house as their children are increasingly more active in their lives.
STORY HIGHLIGHTS

Atlanta (CNN) -- A tale of two different fathers has emerged in America: Those who regularly participate in their children's everyday lives and those who live apart from their kids, according to a study released Wednesday by the Pew Research Center.

"On the one hand, fathers who live with their kids seem to be far more actively involved with their kids than they were 50 years ago," says Gretchen Livingston, the lead author of the Pew study.

"But at the same time, the share of dads living apart from their children has more than doubled" since 1960.

Now, roughly one out of every four fathers lives separately from a child, meaning 20.3 million children don't have a dad in their house.

"This issue of living apart from your kids vs. living with your kids is extremely important if you look at day-to-day involvement with those children," says Livingston.

"Our research shows that dads who live with their children are just far more involved."

The Pew study is based on analysis of the National Survey of Family Growth (NSFG) which involves interviews conducted by the National Center for health Statistics.

Some of the findings seem like common sense: A dad who lives with his child will participate more.

In fact, in a separate survey, the Pew Research found 69 percent of those questioned said they believe a child needs a father in the home to grow up happily.

The study based on the NSFG statistics also found that education, wealth and race play contributing factors.

"White dads, college-educated dads and dads who have higher incomes are all more likely to be living with their kids than other dads," says Livingston. "The numbers are pretty stark."

For instance, 40% of fathers with less than a high school diploma live away from kids compared with 7% of dads with college degrees who live apart from their children, according to the study.

But of the fathers living apart from their children, black dads were the most involved in their kids' lives.

"I do think it's a tale of two different dads," says Livingston, "but just because a dad doesn't live with his kid, it doesn't necessarily mean that he's absent from that kid's life."

On the upside, the study found dads who live with their children are more active than ever before:

• Ninety-three percent talked with their kids several times a week about what's going on in their lives (compare that to 31% who live away from their children).

• Nine out of 10 eat several meals weekly with their kids.

• About six in 10 help with homework.

• Just over 50% take their kids to and from activities.

As for the 27% of dads who live away from their children, almost one-fifth are considered absentee dads, with only occasional contact and no visits over the past year.

Fourteen percent said while they don't live with their children, they see their kids several times a week and talk by phone or e-mail with them regularly.

All fathers surveyed were asked: "How good a job do you think you do as a father?"

Stark answers were given: Nearly 9 in 10 of those living with their children said they were good or very good dads. Forty-nine percent of those living away from their kids answered the same.

Frank Furstenberg, the Zellerbach Family Professor of Sociology and Research at the University of Pennsylvania, wrote a piece titled "Good Dads, Bad Dads" in 1988 about the growing inequities among fathers in America.

He says this latest study further underscores what he wrote so many years ago.

"It's not a new trend, but it's become exacerbated over time," he says.

"From the very start, low-income families, middle-income families and high-income families are becoming more and more divergent in both their form and the way they function as families. It's not because people don't share the same values so much, but the kind of start and resources that parents can bring to bear has become a pressing issue in American society."