How the bicycle changed the world for women 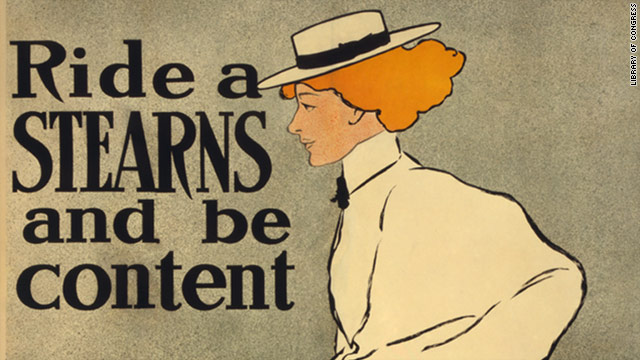 (CNN) -- The wind whistles by like a gentle caress, propelling you forward, as you build up momentum. Legs begin pumping. Scenery is whooshing by, yet you glide down the road as if one with the ground. You and your bicycle are operating in perfect harmony, literally balancing on two wheels.

It's something most people take for granted: riding a bike. Yet, it's an activity many learn early in life. In fact, some would say it's even a childhood rite of passage in many cultures.

"You get a sense of ease of motion," says Walt Kenzie of Roswell, Georgia, an mateur cyclist who has raced his bike on occasion.

"It's relaxing. It's very mentally relaxing from the standpoint of you are always experiencing something new, because everything's changing very quickly, yet you're still getting a lot of exercise," he says.

And that's something about cycling that people have loved from the very beginning, when the first European bicycle made its appearance in the United States more than 100 years ago. In the late 1800s there were nicknames for the bicycle, like "steel horse," "silent stead," and "hobby horse." It also sparked a growing craze.

But, for women, the bike symbolized much more than a trendy craze or a favorite pastime.

"The bicycle created this opportunity for them to leave, to see the outside world quite literally," says author Sue Macy, who recently released a new book called "Wheels of Change: How Women Rode the Bicycle to Freedom."

Macy explained most adult women in the late 1800s were pretty much confined to their homes, as young women or wives, unless they were factory workers. They even socialized in their homes, usually in the parlors with their beau. And their parents would sit there and watch them. Then the bike rolled onto the scene.

"It was extraordinary. It affected the way women dressed, women's sense of themselves, women's ability to travel beyond the confines of their homes," Macy told CNN Radio.

For one thing, the layers of heavy petticoats and wide crinolines had to go.

"When they started riding bicycles it became clear that this wouldn't work," Macy says.

"The petticoats were getting caught in the spokes. Women were really getting injured just because of the clothing they wore. So quite quickly alternatives to the way they dressed were introduced. They were no longer wearing such heavy clothing."

Macy said the petticoats gave way to the bloomers, the puffy underpants worn under skirts. Even with the bloomers, though, women weren't riding for speed or to get somewhere at that time.

Beth Emery is a biking teacher in Connecticut. She's also a historian on women's athletics. Emery said women weren't really riding in the way that biking is thought to today because biking at the time was mostly about being out and being seen.

"It was like parading around and part of getting the fresh air and exercise," says Emery.

She has an extensive collection of turn-of the-century photographs and drawings of cyclists and says, at that time, it wasn't an activity or a hobby for the masses, at least not yet. "Bicycling was a very middle-class or upper-middle-class activity because to buy a bike was hugely expensive."

But the biking craze caught on.

Macy argues in her book that as biking grew in popularity, it helped advance the the women's movement. She points to famous women's rights advocates of the day, including Susan B. Anthony, who thought the bicycle not only helped change women's fashion, but how they behaved socially.

Macy offered a quote from Anthony, who said, "Let me tell you what I think of bicycling. I think it has done more to emancipate women than anything else in the world."

They're thinking about other things, like maybe how environmentally friendly biking really is.

Biking fan Lori Kenzie, Walt Kenzie's wife, explains it this way: "It's a green thing to do. Our daughter has made us even more aware of how green (it is) because she is totally into protecting the planet, recycling, (reducing)the carbon footprint, that kind of thing. She thinks we should all be either riding a bike or using horses instead of cars."

And that would that be a true example of riding full circle.