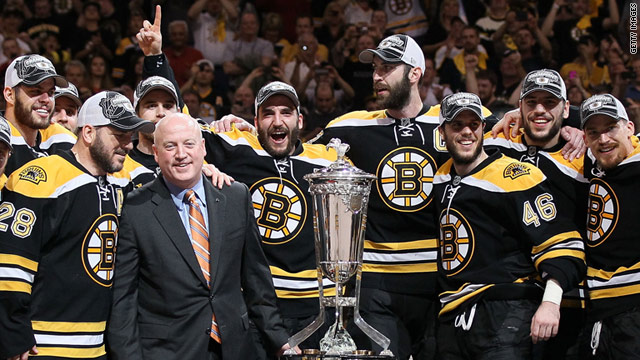 The Boston Bruins pose with -- but don't touch -- their conference trophy after beating Tampa Bay on May 27, 2011.
STORY HIGHLIGHTS
RELATED TOPICS

(CNN) -- Don't touch that trophy! A strange superstition in professional hockey encourages winners of the Eastern and Western conferences to not touch the conference trophy for fear of jinxing the championship.

It's strange but not surprising, as hockey is rife with superstitions. There's the playoff beard: Players do not shave while they are on a winning streak.

Many players have to dress a certain way, and some tape their sticks a certain way, even though new technology makes doctoring or tailoring sticks unnecessary. There are players who pack their gear bags the exact same way every time.

One of the National Hockey League's best goalies, Glenn Hall, used to throw up before each game. Another great goalie, Patrick Roy, used to have a running conversation with the goal posts during games. Crazy stuff.

But the craziest, according to Greg Campbell with the Hockey Hall of Fame, is the superstition of not touching the conference trophies. It is not a very old superstition.

"It began sometime in the mid-to-late '90s," Campbell said. "No one really knows how or why it started, or even really who was the first team to not touch the trophy."

When the Bruins and the Canucks won their respective conferences, the trophy was brought to center ice, placed on a pedestal, and the teams just stood around. No one touched.

Canucks vs. Bruins: Who has the edge?

John Grigg, an editor with The Hockey News, says not touching the conference trophy may be strange, but he offers this explanation:

"You are celebrating something that's not the end goal of your season," he said. "It seems like the players just want to leave that one alone and worry about what's next."

But weird rituals are not just for the pros.

Dave Waite, who plays at pickup games at the Pickwick Ice Arena in Los Angeles, says he's come across many strange superstitions.

"I've seen guys in the locker room wearing their helmets," he said. "That's the first thing they put on. It looks goofy as all heck, but that's their thing, and you don't ask them about it."

Jim Latham says he doesn't play hockey the first week of January. "Because I've been badly hurt twice during that week," he said.

Dr. Rick Van Haveren, a sports psychologist, said many superstitions are routines that are an unconscious focusing tool.

"Having the same meal before you compete; or, under a jersey, somebody may like to wear the same shirt every game; or a baseball player who continues to wear the same hat without washing it" are examples, he said.

"It's really about trying to keep that pattern or that routine going. It's a sense of comfort; it may be associated with winning and feeling in the zone."

Patterns that develop are one thing, like bouncing a basketball a certain number of times before shooting a free throw, or the process of a golf swing. But superstitions are defined by Webster's dictionary as a practice resulting from a false conception of causation.

In baseball, a pitcher on his way to a perfect game is left alone in the dugout. No one talks to him, no one sits near him, and no one even looks at him. In every sport, these things go on.

In hockey, however, everything, it seems, is tied to superstitions. From the way a gear bag is packed, to how the gear is put on, to how a stick is cut, skates sharpened, and laces laced.

So while superstition may not have a real bearing on the outcome of any game, much less a championship, since 2001, teams that have touched the conference trophy are 4-5 in Stanley Cup championships.

As for this year, both teams refused to touch their conference trophies, which means the Stanley cup will go to the winner.