Are your spouse's flaws all in your head? 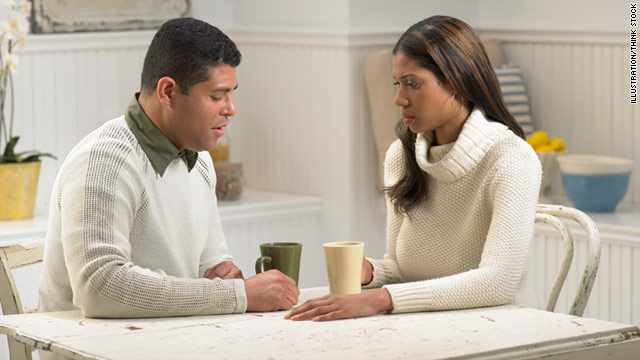 We suffer at the hands of those we love the most -- that's the conundrum.
STORY HIGHLIGHTS
RELATED TOPICS

A despondent patient had come to Grayson's office, complaining about being married to "the world's biggest shrew." As patients frequently do, Jon seemed to want commiseration from his loyal shrink.

Grayson isn't that kind of doctor. "What are you willing to do?" asked the therapist, turning the tables back on Jon.

"Anything," he replied. Grayson's instructions were oddly simple: The next time Jon became anxious over his wife's behavior, he was to focus on his own upsetting thoughts, replacing the inner wife-hating voice -- "She's ruining my life!" -- with a tender memory of the woman he'd once loved.

At first Jon couldn't recall such a woman; finally, a happy moment oozed up from the distant past. He promised Grayson he'd give it a try.

Jon was confused at his next appointment. He told Grayson his wife seemed more subdued somehow. "She must be coming down with a bug," Jon said.

At the following session, Jon was genuinely suspicious. He and his wife had spent their first tirade-free weekend at home in years.

Oprah.com: Improve your marriage without talking about it

The notion that relationships succeed or fail according to how we think about them may seem far-fetched. The science of relationships has tended to emphasize modifying outward behavior -- which is why, according to Grayson, most couples therapy doesn't work.

"It's like trying to clean up a river downstream rather than at its source," he says, settling his rangy, handsome self -- think Mr. Rogers much better dressed -- into the nook of a pale leather sofa.

"We have to go upstream to what we're thinking -- to the beliefs and behavior that come from our thoughts -- instead of trying to change our emotions or, even worse, other people's behavior."

This principle applies to all relationships and not merely to the ones we call special. Specialness makes loving more difficult, Grayson claims -- counterintuitive though that may sound -- since casting people in the role of lover, mentor, spouse, or best friend raises expectations, which leads to fantasy, heartbreak, and pain.

We suffer at the hands of those we love the most -- that's the conundrum. "So much expectation," says Grayson, "blinds us to love."

There are two forms of attachment, apparently, both of which are known by the L word but which, in fact, are very different.

"There's ego-based love," he tells me, using ego not to denote the Freudian sense of self that's indispensable to negotiating daily life but to refer to the illusory armor that suffocates and cuts us off, the self-obsessed me that renders us so unspeakably lonely, stripped of the feelings of belonging and connection.

"That's the irony," Grayson says. "First we imagine our separation from others, then we spend our precious lives trying, and failing, to bridge this false divide."

Spiritual love works on an opposite principle, he continues. Instead of the doomed attempt to "complete" ourselves through another person -- the ego being chronically hungry, unworthy, unsatisfied -- spiritual relationships hinge on the knowledge that each of us is already whole.

"We're complete," Grayson insists, joining his fingers to form a circle. "We are made from the very same energy as the rest of creation -- love, as it is called in the gospels -- in its myriad forms. Our essential nature is divine. In other words, we are already this wholeness, this love, that we seek outside ourselves."

Oprah.com: How to build support a supportive community around you

To appreciate how an agnostic scientist came to this mystical understanding, we need to trace Grayson's pilgrim's progress from choirboy to quantum clinician. Born 68 years ago in Alabama, he'd planned to become a Protestant minister till a few months in theology school convinced him that he had no faith -- not of the church-approved kind, anyway.

"I had stopped believing in the traditional concepts of a medieval, flat-earth 'sky God,' a deity that was far removed from us humans here on earth," he writes in the preface to his book.

Grayson completed his studies nevertheless, earning degrees in psychology and pastoral counseling, then worked briefly as a parish minister, struggling to reconcile traditional teachings with his desire to help his congregants feel God in "every aspect of their lives."

Oprah.com: How self-acceptance can crack open your life

The strategy failed, at least for Grayson. Neither church religion nor advanced psychological studies satisfied his need to address what he calls the "massive problem of human suffering" -- no less to enable our birthright of "indisturbable joy and peace."

It was not until he found himself at a lecture in physics that a theory of how to heal the mind -- and in turn solve the riddle of love -- finally emerged in his thinking.

"David Bohm turned my life upside down," says Grayson, referring to the innovative physicist who wrote, among other things, the classic Quantum Theory.

"Bohm helped me understand that the reality we perceive is a tiny fraction of the universe as it really exists. At an invisible level, everything and everyone is interconnected in a most profound way, not only as human beings but as energy, mind, and matter."

With the barriers between inner and outer, self and other, cause and effect expanded in this prismatic light, Grayson came to see all relationships as being, in large part, an "inside job."

Our core beliefs lead to thought constellations, which lead to perceptions, give rise to emotions, and cause, domino-like, outward behavior. What's more -- and here's where Grayson's theory requires thinking outside the box -- the behavior stemming from our own thoughts may manifest in the people around us.

Jon's wife acted differently once he'd found a new way of viewing her, proving Heisenberg's principle that objects, including human ones, are changed somehow by the very act of being seen.

Lofty as this may sound, Grayson is a pragmatic man for whom ideas matter because they help people.

"This means," he says, "that everyone is our soul mate. We share the same last name, which is God." In his popular tape series, "The New Physics of Love," as well as in his book, he offers advice on how to apply this cosmic law to our everyday lives.

We start, he says, with awareness of our own minds and the development of the inner "witness," either through formal meditation or simple self-reflection. By stepping back from our thoughts, noticing how they tumble toward feelings, trigger opinions, and cause knee-jerk reactions, we learn to interrupt this sequence, to crack the ego's prison so that love can pass more freely between us.

By learning to better navigate our mental terrain, we're better able to choose how we think about the world around us, to alter the frame through which we perceive our lives, ourselves, and our challenging loved ones.

What's more, there are reliable litmus tests for distinguishing counterfeit love from the real thing, Grayson says. Infatuation, the need to control, confusing love with worry, ensnaring someone as "special" -- these are signs that ego, rather than heart, is driving a relationship.

This counterfeit path is marked by potholes most of us recognize all too easily -- demanding that love be earned, trying to change another's behavior, becoming addicted to someone's presence, and wanting to punish the other for disappointing us.

Oprah.com: 9 ways to connect with the world

The big giveaway to ego-based love, however, is the spoiling presence of fear. "For the ego in love," he tells me, "the greatest fear is losing the other person or losing yourself." Terrified by the threat of loss, we often fulfill our own prophecies.

The only remedy is commitment to practicing self-awareness. This starts with realizing once and for all that we vastly underestimate our capacity for love and are more profoundly interconnected than we can possibly know.

The only thing blocking our awareness of this is ego's self-protecting harangue.

"Love never hurts," Grayson tells me, having arrived at this wisdom through his own two marriages. "When my feelings are hurt, it's nearly always my interpretation of what has happened that causes the pain."

Just think of the last time you misread someone's innocuous action as all about you. "I've come to understand my wife as a kind of mirror of my inner life. She's far more likely to be critical of me when I think critically of her."

By turning attention away from our partners, over whom we have little control, and focusing on this inside job, we begin to make love a path of enlightenment. This is Grayson's primary goal.

"If the purpose of relationships is understood to be cultivating our own true nature and supporting our partners in finding theirs" -- as opposed to sharing the bills, say, raising kids, or having a lot more sex -- "then the label we place on the form love takes becomes secondary."

Indeed, his chapter on "spiritual divorce" is likely to surprise some readers; according to Grayson, even "unhappy endings" can deepen -- indeed transform -- a continuing bond between once-married couples.

Knocking down more boundaries, Grayson claims that "once we're aware of who we really are, there's no big difference between giving and receiving. If I'm generous and attentive, it's because I want the best for you. This brings me joy and fulfillment rather than the drain that comes from a feeling of obligation. That's the kind of love that empowers, without desire for payback. If I want love," he says, "the best thing I can possibly do is extend this desire into the world as a loving thought -- such as 'may all beings live in peace' -- within my own mind."

The shift to mindful loving begins with acknowledgment that infatuation isn't real.

"The bad news about 'falling in love' is that it isn't genuine love," he says. "It's based on an illusion, a fantasy of who someone will be. When the other person doesn't fulfill our dreams -- which, of course, he or she never does -- all sorts of bad things happen. You realize you've been living in a dream state, something you need to awaken from in order to love as your true self."

But, we protest, we want to find comfort in romantic love. Don't take l'amour away from us, we groan in adolescent despair.

Love seems to be the last respectable place, in our too-grown-up lives, where we allow ourselves to be idiots, ridiculous messes, dramatic, impulsive, less than our p.c. best. Grayson's cure may seem bitter to the die-hard romantics among us.

But one might ask, Do we need more grief and fear, more isolation, illusion, and heartbreak, in our love-starved world? Or do we need a change of mind, a liberated vision?

Shall we whitewash the fences we build with our egos, or wake up to the glaring fact that love, according to every sage from every single wisdom tradition, is already here?

If Henry Grayson prevails over Hallmark, the answer will be clear as day.

Oprah.com: How to uncover your deepest desires

By Mark Matousek from O, The Oprah Magazine © 2011