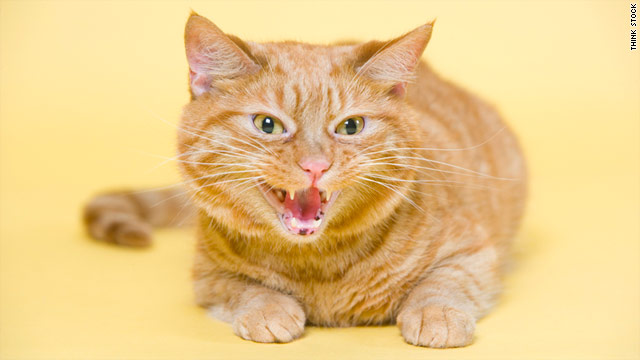 Petting your cat can cause an unpleasant feeling, like a shock from static electricity -- and they bite to let you know.
STORY HIGHLIGHTS
RELATED TOPICS

(MNN) -- Why is that cats like to cuddle -- but only on their terms? Cats aren't my expertise, but I do know the warning signs of a brewing catastrophe.

"It's not unusual for a cat to walk up and purr and rub against your legs, then when you pet them, they turn and bite or scratch, making people feel betrayed or confused," Collins says.

Try not to get frustrated. She notes that repetitive stroking causes sudden arousal in some cats, and that feeling can be unpleasant -- like a shock from static electricity.

"It's an individual cat thing that can happen at varying ages," she says.

Your cat may actually offer subtle cues that she's over cuddle time. Collins says to look for early warning signs such as a switching tail or ears that are laid back.

Find the stage when your cat becomes uncomfortable with petting and stop before things get ugly. Forcing her to endure cuddle time will only make the problem worse, Collins says.

"If at stroke four they get tense, you know you have a three-stroke cat," she says. "When the cat approaches and asks for petting, stroke it three times and give it a treat or toy, but don't force it over the threshold."

After about a week of offering three strokes followed by a treat, try to sneak in a fourth stroke. Eventually, your cat will tolerate the additional affection.

MNN: Animals that are in the news

"She learns good things happen when petting happens," Collins says. "Slowly increase the number of strokes. Over time, you can build a liking of that kind of touch."

While this positive training method can help improve your cat's response to petting, it's important to note that your cat may never embrace full-blown cuddle time.

"Stop when you know she's ready to stop," Collins says. "Accept your cat for who she is."