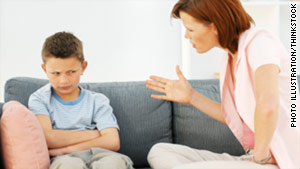 The problems between stepchild and stepmothers may be fueled by hidden agendas and hurt feelings.
STORY HIGHLIGHTS
RELATED TOPICS

(CNN) -- If there was a job posting for a stepmother it might read:

Woman needed to raise someone's else's kids who will fight you and test you and might even hate you forever. You may get hit with unearned nicknames like Evil Stepmother or The Homewrecker. Job requires long hours over many years for no pay and little gratitude. Expect scant support from their father and possible enmity from their natural mother.

Who wants to apply for that job?

But the biggest challenge for stepmothers is the family dynamics that already exist in the family she is joining. Many disruptive issues can involve battles over love.

"There are some moms and dads out there who both really play head games because in divorce the kids often become trophies," said psychologist Eric Fisher, who is also known as Doctor E. He says if one parent can win the love of the child, that parent can rub his or her spouse's nose in that victory.

The kids can feed off that dynamic, says Doctor E, and they fear that giving the stepmom status or recognition would be a betrayal of their real mom. So even if the kid wants to like the stepmom, he may feel stuck in the middle of this power battle.

The stepparent may also find herself in an unwanted competition with the person she married who sets her up to fail in the children's eyes so he looks better.

People bearing wounds from the family battles commented on a recent column.

"As step-kids, you have to keep both side happy - your Mom's side & your Dad's side. It's exhausting trying to make sure no one's feelings are hurt," wrote holley20.

"As a kid I never felt an ounce of love from my stepmother," writes sofie01. "My weekends at my dad's were beyond uncomfortable with my stepmother badmouthing my mother ..."

"I reached out to my stepmother, after being encouraged by my father, and was rebuffed. She has always favored her own children over me and hasn't tried to hide it. Finally I just gave up trying to gain her acceptance," wrote Shyla07NY.

"Bio-mom in my case wanted it written in to our most recent court settlement that my step-daughter couldn't call me Mom - even though she chose that name, and has never been forced to do so," wrote sarakate77.

The comments were posted on a story written by a stepmother who was pained by how she wasn't acknoweldged on Mother's Day.

Some commentors addressed the issue from the other side.

"I don't mean to sound harsh, but you're not Mom. You're step Mom and have no right to replace the children's Mom by needing your ego stroked one day out of the year. Sorry but it's true. You are just the woman their Dad married," wrote responsible4 .

"My stepmom gets highly offended that I spend the day with my mom instead of her and my dad gets all pi$$y with me as well that I chose my mom over her. I love them both but my mom is my mom. She gave birth to me after all. What can I do..." wrote j0nx4.

But other stepparents also commented about how much time, effort and love they lavished on children that gave them very little back. One even said that had she known what an exhausting and thankless effort it was going to be taking care of three stepchildren, she never would have married their widower father.

Dr. E suggests that parents need to respect their children's feelings before bringing another parent into the household. Not that kids should have control over whether their parent remarrieds. Instead, parents should tell the kids, "I love this person. I want to spend the rest of my with with them and I'd like you to spend your life with them too."

And then the psychologist suggests the parent ask the children, "What needs to happen for you to feel more comfortable so we can do this together and make sure we're all working as a team."

Some parents need to seek family counseling and Dr. E. says he tries to get parents and stepparents in the same sessions to avoid triangulation issues.

Some parents and stepparents do find a way to work together for the sake of the children. One commenter declared she was the biggest fan of her daughter's stepmom.

"I am grateful that she takes such wonderful care of my daughter when I'm not around," wrote MktgMaven.

And to stepparents, Dr. E says, they need to love their stepchildren as they are, not the way the stepparents want them to be.