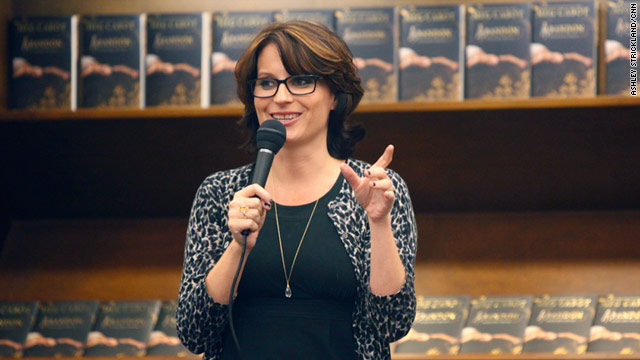 Best-selling author Meg Cabot of "The Princess Diaries" fame returns with a retelling of the Persephone myth in "Abandon."
STORY HIGHLIGHTS
RELATED TOPICS

(CNN) -- Talking to best-selling author Meg Cabot, you can almost hear where her charming, quirky heroines find their moxie to command popular series or standalone novels.

An accidental princess, lightning-strike victim and a girl who sees dead people are just a few of Cabot's relatable teenage characters. Many readers already know her conversational tone from "The Princess Diaries" series and films. The mind behind 44 teen novels, Cabot has also written adult and "tween" fiction.

She returns to the teen scene with "Abandon," which follows Pierce Oliviera and John Hayden as they navigate high school, putting a creative twist on the Greek myth of Persephone and Hades. It's not her first time reimagining a myth -- 2005's "Avalon High" put the King Arthur tale to a contemporary test.

Cabot's empowered heroines find themselves in sticky situations from the White House to the underworld while combating the normal pressures of being a teenager. They are fun, escapist first-person narratives with a relaxed style that draw readers in from page one.

CNN chatted with Cabot while she's on tour promoting "Abandon," which debuted at No. 6 on the New York Times bestseller's list. The following is an edited transcript.

CNN: How old were you when you started writing?

Cabot: I was 7 years old and that's when I wrote my first story, "Benny the Puppy." One of the reasons that I think I do love to write is because I did have a difficult childhood and not so great teenage years. It always helped me escape from my problems.

My family, they're story tellers. My mom is Irish, and my dad is Italian. In my family, we weren't allowed to watch TV while we ate -- we had to sit around the table and tell stories about our day. Reading was greatly encouraged, so we had weekly trips to the library.

If we ran out of stuff to read, we had to write our own books, so I always wrote and illustrated my own stories. I just grew up doing that, and I never stopped.

CNN: I saw that you still have the sketches of Persephone you created in high school. Can you take me from that first sketch to the finished book "Abandon"?

Cabot: I was the kind of kid who couldn't really stop making up stories during class. I didn't do very well academically because I was always drawing these little doodles in the margins of my notebooks and I wasn't bringing home the best grades. But I just didn't seem to find my niche.

When I did see the story of Persephone, I was really drawn to it. Persephone, the goddess of spring, was kept from Olympus by her mother, Demeter, because Demeter was very worried that the gods of Olympus would do something terrible to her. What happens to almost every female character in every myth is they all end up getting turned into trees or animals. Of course, the god of the underworld, Hades, snatches Persephone and takes her down to the underworld because he also didn't fit in and wasn't allowed on Olympus either.

I think what I really took away from that story was here was a girl, like me, who didn't fit in. Then she found her place and purpose, which was to be the queen of the underworld, except she's also the goddess of springtime, so it's got this really hopeful note to it.

I could not stop doodling that story in my algebra notebooks. And I saved those notebooks, so I've been thinking about this story for a long time. I actually posted those drawings in 2006 and so many girls responded with "you have to write this story." I wanted to do a modern retelling of it and the response was so overwhelming, I knew I had to.

CNN: You were getting involved in that paranormal vein before a lot of YA [young adult] authors, what with the 1-800-Where-R-U? and Mediator series.

Cabot: I had a hard time at first getting those books published. To have one with relatable female characters was unusual, so it's really great how now there are so many. It's just kind of exploded and now teenage girls don't have to feel like they're alone. When I was growing up, it was hard to find good "escape" teen literature. YA has come so far and there are so many of those empowered heroines now. It's a great genre to write in.

CNN: You have a unique voice in your books. How would you describe your writing style?

Cabot: I hear a lot from readers who don't like to read! I also hear from those who do, but a lot of them say they didn't like to read until they picked up one of my books. I believe it's because I write in a conversational style and they feel like they're hearing a story from a friend of theirs. I really try to write the way I would tell a story to my family.

CNN: Is it hard for you to continue writing teen fiction that is relatable?

Cabot: I feel like there is even more of a need for teens to escape from their own problems. Before, when you were bullied, someone would write something nasty about you on the bathroom wall. Now, it's on the Internet.

I feel committed to what I'm doing. Especially with "Abandon," I did have some of the difficulties that this heroine is dealing with and I really wanted to tell this story. I was a teen, so I do remember and know what they're going through, so it's not easy to do but it's easy to remember. I kept all of my diaries and I still have all of those things to refer to.

CNN: What is the "this is teen" community and what are you doing with it?

Cabot: Teens are already spending so much time online and a lot of them are blogging about books anyway, so it's a virtual book club for teens to connect with authors. I'm going to be touring with a couple authors who are involved with it in June, but it's already online.

CNN: What's your writing schedule like, and how do you prepare to start working on a book?

For instance, with "The Princess Diaries," the idea for it really was based on my mom dating one of my teachers.

I'll get the idea, and I have to let it sit for a while to see if it's really something that means a lot to me. If you're not really inspired by something you feel personally, I don't think the reader will feel that way.

With the Mediator series, it was right after my dad died and my brother and I kept thinking we saw him everywhere. We wondered, 'what if you saw all of the dead people'?

CNN: Did you find it difficult to re-imagine myths like in "Avalon High"?

Cabot: No. It seems like there are so few myths that empower women. "Avalon High," which is the retelling of King Arthur, I wrote because I was mad about what happens to Guinevere. She gets blamed for the fall of Camelot and I wanted to retell that where she doesn't come off in a bad way. It's set in a modern high school and this time, the girl gets to save Camelot.

CNN: What do you think teens are looking for now in the books they choose?

Cabot: It really is an escape from their problems, to be taken away or into a new world and experience something different from what they're living. Just like adult readers, they want a good story. They don't want to be condescended to.

CNN: The teen fiction market has been very paranormal heavy, but what do you see on the horizon?

Cabot: I believe we're going to see empowered heroines, books with relatable characters and more hopeful stories. Maybe more characters that are outsiders, like themselves. I'm not saying all teenagers are outsiders, but I think in every teenager, there's a little bit of a feeling, like all of us, of "where do I fit in?" because that's part of growing up.