'He was an evil man, without a doubt' 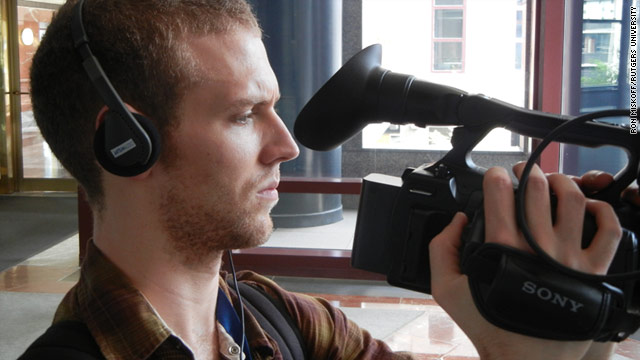 David Seamon was 12 on September 11, 2001, and says working on the 9/11 Project has been a good education.
STORY HIGHLIGHTS

David Seamon is working on The 9/11 Project at Rutgers University. Students are telling the stories of children who lost a parent in the September 11, 2001, terrrorist attacks. The stories will appear in New Jersey media outlets on the 10th anniversary of the attacks.

New Brunswick, New Jersey (CNN) -- September 11 was a tragedy so immense that it has sent ripples, and sometimes tidal waves, through the past 10 years.

In the big picture, since 9/11, we have become engaged in two armed conflicts, seen thousands of American soldiers die, aided countries that have been attacked by terrorists and are now living in an age where trust in government is an oxymoron.

On Main Street, the broken families left behind after the dust cleared on 9/11 have been living in the shadow of that terrible memory, that terrible loss, for a decade. Some are prevailing while others are struggling, but all are struck by the loss each day.

We journalism students have been interviewing children of the victims of September 11 to see how they are doing 10 years on. I interviewed a brother and sister in Colonia, New Jersey. They shared so much with me.

It's hard to write about such a sensitive subject and not want to include every minute detail. So I'm focusing on what it is that has gotten these two through the past 10 years.

When all of our stories are published in September, I think readers are really going to know these children through their experiences. In that way, I hope the children receive respect and recognition for their great achievement of moving forward over the past decade.

I signed up for the 9/11 Project because it was a hands-on course in narrative journalism that would produce a documentary film and my byline in newspapers. September 11 affected me personally only slightly. At my church, some parishioners lost their son, a firefighter. Later, in November 2001, someone broke into the church and burned our book of special intentions and an American flag standing next to it.

Events like this and my observing how our society and our media have changed over the past decade make up my 9/11 experience. Since I was 12 on 9/11, I remember the past 10 years very well. They have run parallel to my teenage years and college career, during which I became interested in journalism.

The news of Osama bin Laden's death obviously affects the stories we are writing. How could it not?

We are profiling people who lost a parent as a result of bin Laden's commitment to terror. He was an evil man, without a doubt, and the families of those who died on September 11 can consider his death a piece of closure. But it's not for us to say whether bin Laden's death will help a fatherless teenager sleep better at night.

I saw a Facebook status from a child of a September 11 victim this week. He wrote about bin Laden's death. He was angry. He cursed bin Laden, and friends and family commented on it, agreeing with him. To them, he deserved a worse death. Osama bin Laden's death obviously strikes a chord with the families of the victims, but it isn't a cure-all.

I don't know if it will help the difficult emotional process that all these families are going through. We'll see how everything unfolds in the coming days, especially if the pictures are released. That will be a whole other story.