Author: Don't check your emotions at the workplace door 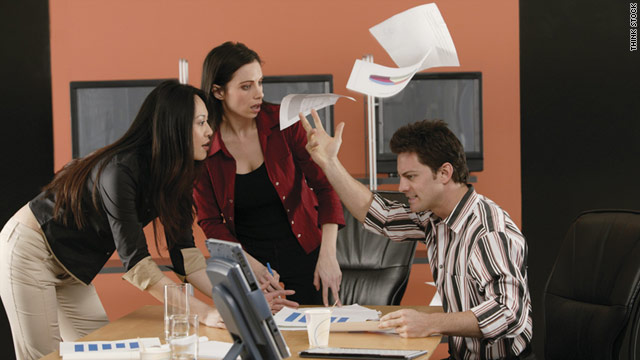 (CNN) -- Go ahead and have a good cry at work. You might want to get emotional behind closed doors, but research finds it won't hurt your chances of getting ahead.

Anne Kreamer's new book, "It's Always Personal: Emotion in the New Workplace," explores the emotional dynamics at play in a world where the line between work and home is becoming virtually indistinguishable.

The former worldwide creative director of Nickelodeon and Nick at Nite interviewed more than 200 working Americans to get a sense of what's going on in their heads and how that spectrum of emotion manifests itself in the office.

She places their personal stories within the context of scientific research and statistical analysis to explain why we occasionally cry, yell or break down in the workplace and how to manage those emotions.

She recently spoke to CNN.com and here is an edited transcript:

CNN: Was there anything that surprised you while you were writing this book?

Anne Kreamer: People at upper levels of management, both men and women, reported they had cried at work. The common assumption is that people who cry can't get ahead so it was profoundly liberating to me to hear that people who showed emotion at work were viewed as speaking from the heart and it didn't affect their ability to rise through senior management ranks.

Most people seem to realize that crying is nature's emotional reset button. It was interesting that men reported that after they cried at work they felt refreshed, that they could see the world through clear eyes, but women felt ashamed.

Another fascinating thing I found out is women's tear ducts are anatomically different from men's. Where a guy might be feeling the same degree of emotional distress, his eyes will well up with tears. But for women, who are biologically hardwired differently, tears flow from our eyes.

CNN: What are the biggest differences between men and women?

Kreamer: The two biggest areas of difference between men and women and the expression of emotion in the workplace center around anger and crying.

Women reported that they feel anger at work slightly more than men -- 51% versus 42%. But young men (42%) versus (23%) of women believe that anger is an effective management tool.

When it comes to crying, 41% of women reported that they had cried during the past year versus 9% of men.

CNN: Why is it important to not suppress your emotions at work?

Kreamer: I talked with multiple neuroscientists and reviewed much of the current research in the field and it is clear that when negative emotions -- anger, fear, anxiety -- are suppressed they have a tendency to erupt more powerfully and explosively in more injurious ways.

I am not an advocate for "letting it all hang out," but rather suggest that if people can look clearly at their anxiety or anger when it begins to percolate you can figure out strategies for dealing with those feelings before they trigger an unpleasant encounter.

Don't ignore what you are feeling but instead, try to understand where the emotion originates -- are you feeling anxious because you don't know how to tackle an assignment, or because your company is downsizing, or you have too much on your plate -- or are you angry because a colleague is taking credit for your work, or you feel undervalued for your contribution, or you work for a bully? If you can decode what's at the root of your feelings, you can develop an action plan to deal with the issues.

If you bury your emotions, refusing to think about them you avoid addressing the underlying causes and limit your ability to move forward.

CNN: What might you have done differently as a top-level executive knowing what you now know about emotions in the workplace?

Kreamer: If I'd known, for instance, that men produce cortisol and testosterone (the fight or flight aggression hormones) when under stress I might have taken some of the more tense interactions less personally.

Had I understood the biological importance of tears -- nature's emotional reset button (for instance, among other things tears stimulate dopamine production which is the neurotransmitter that helps elevate mood) and that people cry for all sorts of different reasons -- frustration, anger, fear, joy, sadness -- then I might have been able to help people process more clearly what had triggered their tears.

I hope I would have been more compassionate. I also would have tried to work with people to develop more individually tailored strategies -- walking, meditation, cooking -- whatever, to help them master their emotions and move past their own ingrained patterns.

CNN: Why is this book relevant?

Kreamer: I think a few things that make it relevant. One is the fact that women make up over 50% of the work force for the first time in American history. That gives us the opportunity to step back and think about workplace norms.

The second piece is that we all work in a 24/7 workplace environment. I don't know a single person who sits at their desk and doesn't have messages from children, partners, caregivers, constantly coming in. The emotional drama that used to be conceived of as only at the home invades work life constantly. Conversely, at 10 in the night we're sending off work e-mails.

So the stress and the anxiety and all the things that create emotional situations are always around us. There's no longer the sense that the office is a rational place and home is where the emotions are.

The third piece is that the study of neuroscience has only really begun to look at our emotional triggers. One function of magnetic resolution imaging is it shows how the brain operates in different situations and shows there are differences between us and among us.

Women from my generation were told, "Whatever you do, do not let them see you cry," but now we live in this world of 24/7 transparency, where social media captures every mood and feeling and puts it out there for the universe to experience. What are the implications of all that rolled up together? For me, this book presented a really interesting opportunity to step back and think about all those circumstances.

CNN: Is the book intended for men or women?

Kreamer: The book is intended for everyone. As I say in the book, men are from Mars and women are from Venus, but we all live on planet Earth. What I hope to achieve from blending interviews with 200 people in different fields with statistical analysis and research on neuroscience is to offer a roadmap for how men think about women, how women think about men and how we think about ourselves individually.

CNN: Do you think it's possible to fully remove emotions from the workplace?

Kreamer: I don't think you should, nor can you, remove emotion from the workplace. We should embrace emotions, but in a world where there's no distinction between work and home, how do we think that? I think it's important to show humanity.

Eighty-eight percent of people surveyed said they want more emotion in the workplace. They want to feel comfortable showing emotions, they want to show that they care or that they feel frustrated. People who are emotionally expressive should feel comfortable doing that and not feel out of control and people who are naturally reticent should not feel like failures because they're not yucking it up all the time. We should be respectful of the range of emotions.

CNN: You open the book with an anecdote about a moment in which you and your colleagues were celebrating a great achievement when Sumner Redstone calls you and tears you a new one for not delivering the results he'd hoped for. Why did you choose to start there?

Kreamer: It was something that almost 20 years later I could vividly recall because getting yelled at in front of colleagues is even worse when you have a complete meltdown. There's a human desire to not be seen as abased by another, and there was so much going on in my personal life at that moment that I had struggled so hard to deal with -- my parents dying -- so it was like, really? This is what's important in life?

CNN: You devote one chapter to exploring the defining traits of what you call the four Workplace Emotional Evaluation Profiles (click on link to find out yours!). In your career in the media industry, have you encountered one personality more than the others?

Kreamer: Not really. Senior management allows a greater degree of tolerance for the spouter personality, but you encounter all kinds of personalities no matter the industry.

One of the things I realized is the Beatles are a perfect model for the WEEP profile. You needed all four of them to make music and but some are more dominant or change over time.

John is clearly the spouter, the political activist who wears his heart on his sleeve. George is a complete believer, and Ringo is the accepter who's kind of comfortable taking the backseat but is still integral to keeping the beat. Paul is the solver who says let's keep this show on the road and I think you'll see a similar range of personalities in any company with more than a couple of employees.

There's literally zero gender distinction among the four profiles, very little income distinction and very little management distinction apart from a small skew of slighter older people being solvers and slight skew of entry level and younger people being accepters, which makes intuitive sense, that people starting out might be scared of expressing or sharing for fear retribution where people with more experience might be less reticent to share what's on their minds. But overall, there's very little distinction but there isn't one profile that's good or one that's bad.