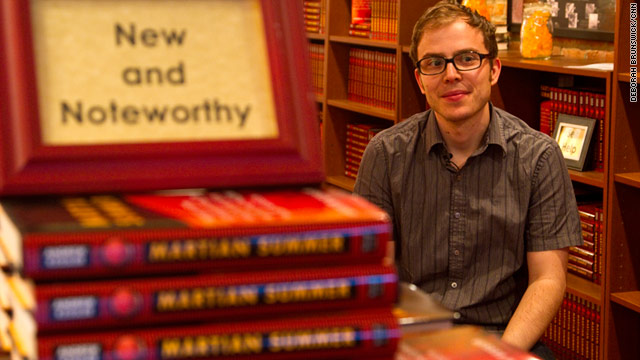 Andrew Kessler sits in a section of his bookstore that sells only one book: "Martian Summer."
STORY HIGHLIGHTS
RELATED TOPICS

New York (CNN) -- Andrew Kessler gets it. His first novel, "Martian Summer: Robot Arms, Cowboy Spacemen, and My 90 Days with the Phoenix Mars Mission," debuted at a time when the publishing world is floundering, bookstores are folding and eBooks are flourishing.

So the writer who spent three months embedded with NASA's mission control with unprecedented access to the Phoenix Expedition in 2008 decided his next venture would be more ambitious. He launched a bookstore in New York's trendy West Village and stocked it with just one book, his own.

"Reactions vary so wildly," said Kessler at his shop. "A lot of people are scared to come in. Some people wonder if we're Scientologists."

The store, Ed's Martian Book, is divided into sections including "staff favorite," "best -seller," and "self help."

Kessler gets all sorts of questions, but the only one that seems to rattle him is: "What's your overhead?"

"I don't ask you your rent," he objected before explaining, "Part of the fun is people guessing how you can afford to sell books."

Kessler refers to himself as a "monobookist." The store, which opened April 12 with 3,000 books, is in an affluent part of a high-rent neighborhood populated by celebrities such as Sarah Jessica Parker, Liv Tyler and Julianne Moore. Rent's not cheap.

Kessler says he worked out a deal with his landlord, who was interested in supporting the arts. Then he dug into his savings to purchase the inventory and recruited friends to help him transform the space with alien art on the walls and dioramas depicting the scientists and engineers he came to worship during his summer at mission control.

"It's so unique," raved actor Robert Rubinsky. "I want to bring my PR person here. It's such brilliant branding!"

But not everyone is a fan. Some people are confused by the concept and others reject the idea of a "monobookist bookstore". But Kessler said he isn't looking to make a profit as much as a statement about the value of books.

But that challenge is dwarfed by NASA's Herculean task of using the first manmade probe to dig up dirt on Mars. In his book, Kessler called his unfettered access to that mission "winning the nerd lottery."

As the first outsider granted such permission, the author had a front-row seat to space history while he watched NASA's top scientists and engineers overcome the hurdles of maneuvering a robot in outer space and discover ice on Mars.

Now as NASA prepares for its last shuttle launch, he hopes he can deliver on his promise to get people interested in space exploration again.