How to get on The Sartorialist 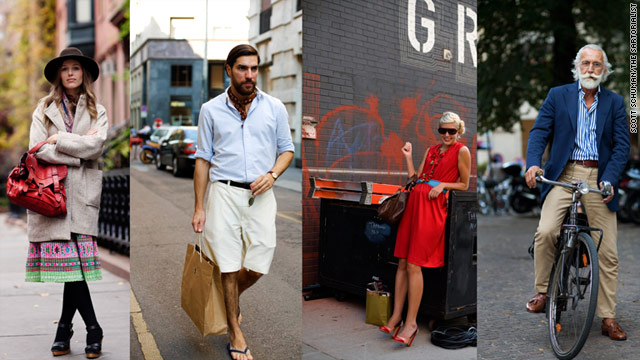 Scott Schuman hopes fans of The Sartorialist will be inspired by something in the styles-on-the-street that he photographs.
STORY HIGHLIGHTS
RELATED TOPICS

(CNN) -- People pull up The Sartorialist blog to get their fashion fix and comment on what they like about the style of the subject, the mood of the photograph or even what's in the background.

The man behind the blog, Scott Schuman, stalks the streets of New York and a few other cities to find people who have "that certain something" in their style and snaps their photo and posts it on his blog.

CNN chatted briefly with Schuman and below is an edited transcript.

CNN: How do you chose your subjects?

Scott Schuman: I'm just reacting to what I see. There's really no big criteria. If you look on my site right now, I was in Harlem during Easter and you can see the people I photographed. There are three people there and each one is very different -- one's a kid, one's a beautiful young lady in very modern fashion and one's an older gentleman -- kind of an old-school kind of haberdashery kind of look. So I'm really just reacting to what I see initially -- no preconceived idea.

CNN: Your photos seem to have a mood.

Schuman: Hopefully, it's a good mood.

Photographers have done street-style in the past. A lot of times they take the person, put them up against the wall -- and they're taking a photo and it's very much a report on what the person is wearing.

I hardly ever put a person up against a wall. I really want to try to capture them in their environment. So if anything, it tells you a little bit about this moment.

I think the picture is just important with the street furniture, with the kind of cars in the background. It really tells you something about the moment when that was shot. The kind of graphics and all kinds of stuff. That's why I usually frame them the way that I do because the subject is the main part of the image, but the backgrounds and the feeling -- hopefully trying to capture (that).

You know, once I decide I want to shoot them, then I'm really just trying to create a nice portrait -- something that looks like a nice photograph that the person would be glad to see. A memento as much for them as it is for me.

CNN: How many people say no?

Schuman: Some. You know, I've gotten pretty good at being able to figure out who I think will say yes or no. In certain places, I have a much higher percentage, but if I go some place like Harlem or a smaller town in Italy or something like that -- people have no idea what the Sartorialist is and sometimes they say yes. It's not a high percentage -- but I certainly get no's and it doesn't bother me.

Schuman: I think it's almost always Italy in general, and Milan specifically -- just because it's such a high density of style there.

Schuman: No, it's very homogenous. And it's like that with food. You go to Milan and the food is great across the board. But that's because they basically only cook Italian food. There's hardly any Japanese restaurants, certainly any Mexican restaurants. The Italians do very well because for the most part that is all they do.

Where as New York has much more variety of styles. I always say Milan is narrow and deep. Very few styles, new types of styles -- but very deep in that, a lot of variations.

Where New York is not very deep in any particular style, but a million kind of variations -- goth, prep and sporty -- a million different kinds of things. London is the same way.

CNN: What part of New York City do you like to shoot.

Schuman: I live close to downtown. So I find myself downtown a lot and I like the backgrounds there. But I keep pushing myself -- I rode my bike up to Harlem yesterday and go out to Brooklyn ... and those shots are a lot tougher to get. So you don't see as many of them.

But I really like to try to mix it up and go to new places. I've gone up to Washington Heights -- way up on the top of Manhattan several times. I like challenging myself and going to different places.

CNN: What compelled you to start taking photos?

Schuman: I was already kind of playing around with the idea of shooting out in the street -- but without the blog it was kind of a hobby. When I realized what I should do is be shooting what I know, which is style and fashion on the streets in my own particular take. Then it was really kind of a no-brainer -- once I put those two components together.

CNN: You mentioned on your blog that it was after 9/11 that you started. How did that affect you?

Schuman: Yeah, I had a showroom and I closed the showroom. I watched my kids. 9/11 in and of itself -- and the effect of 9/11 -- was really the resolve to be with my kids more, opening myself up to being an artist. So it was things like that. The event was a huge thing. But the aftermath was equally important.

CNN: Do you see any new fashion trends on the street.

Schuman: I don't really pay attention. I mean I go to the shows -- I get great seats at the shows. But I don't really look to correlate those two. I don't look for trends on the streets. You never really see me report on a trend. I don't want to say I'm ahead of the trends -- but what I'm usually shooting is just a mix. Some things are very much of the moment -- very high fashion -- it could be Prada or whatever -- I don't really talk about that. I don't usually mention that it's Prada or whatever.

CNN: What about your own style?

Schuman: My style is pretty consistent -- it's evolved as I've been doing the site. I love the idea of suits and things like that -- but in my everyday life, I don't have to wear suits that much.

But my style is pretty consistent. But I use the site like I hope other people do -- ideas of color combinations or all kinds of little abstract things. When I'm shooting at Pitti Uomo in Florence -- which is a great men's trade show -- there I use a lot of very knockoff reference -- I'll see guys there and say, "I gotta do that ... and I gotta do that."

I think I use my site the way I think most people do -- kind of reference and inspiration here or there.

I think the one thing about the site is a lot of people say that they didn't really relate to fashion magazines, but they relate a lot more to the site because there is a mood -- and usually it's a positive mood and a wide range of people that I shoot.

I think they feel good looking at fashion that way --because it's much more accepting -- it's much more inclusive as opposed to exclusive -- but at the same time it's at a very high level.

A person could be wearing something absolutely inexpensive ... but still have to have a certain something, a certain grace about them. So in that way it's very inclusive but still very exclusive. I think that's what people really like ... they can't buy their way on. They just have to be something special that I think I can capture.

So I think it's a feel-good fashion that I think a lot of people kind of miss.