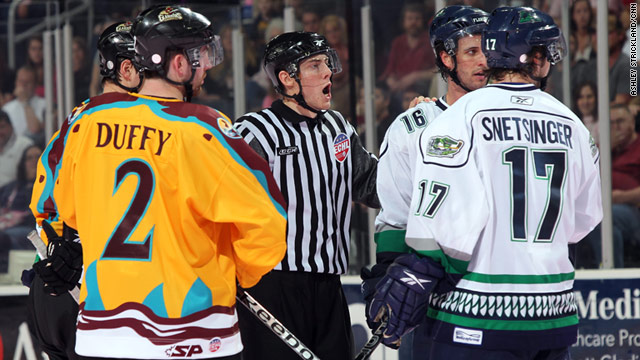 Breaking up fights on the ice is just another day on the job for hockey linesman Alex Stagnone (center).
STORY HIGHLIGHTS

(CNN) -- If you ever feel overwhelmed at work, imagine breaking up fights and taking a puck to the face while trying to earn a not-so-great salary.

Alex Stagnone's face once needed eight stitches while on the job, but he quickly returned to the ice, ready for another 20 minutes of relentless action.

"That's hockey," is a common response from any player when suffering sport-related injuries. But Stagnone, 23, is a linesman with the ECHL, the NHL's double-A league.

Skilliter is an ECHL referee or "the boss on the ice." They make all final decisions on calls, penalties and disputed goals. Linesmen follow the action, break up fights, call minor penalties and drop the puck.

Become a hockey official
Most officials are former hockey players. Skilled skating and a knowledge of hockey and its rules are a must.

Register with USA Hockey and call for specifics regarding your own experience.

Be willing to travel extensively, possibly relocate and keep yourself in top form by frequenting the gym.

Prepare to give up your personal life for around eight months.

Be a professional on and off the ice -- you have a reputation to uphold.

Friendships and favorite teams don't exist on the ice for officials, and just like an off-duty police officer, keep your nose clean otherwise.

Grow up! Most officials start young, but the job demands maturity.

Officials face a crowd of hockey fans who will never be satisfied with every call -- and fans aren't shy about voicing it.

"You get booed a lot, but you learn to like it. You get so used to it, it kind of becomes comical," Stagnone said, adding he tries not to take it personally.

After growing up playing hockey, Stagnone attended one of USA Hockey's weeklong summer camps taught by seasoned supervisors. He then worked his way up through the tiered levels of hockey.

Joe Ernst, director of Officiating for the ECHL, hires skilled skaters with good judgment who are hungry for a spot in the NHL and are physically and mentally tough.

While the hockey players get regular line changes, officials only get a real break every 30 minutes.

"Our general rule of thumb is to be in as good of shape as the players, if not better," Skilliter said. "The players will be out for 45 seconds and go red line as hard as they can. For us, it's more of a marathon."

During the playoffs under way now, the officials face more pressure than normal because their calls could land an important player in the penalty box or disallow a goal. So each call could have an affect on who wins the league title.

Both referees and linesmen need thick skin to deal with angry coaches and players over disputed calls.

"You have to stay professional no matter how unprofessionally someone may treat you. It's keeping your cool when most people would lose it," Stagnone said.

Officials also have to anticipate plays before they happen. It's called "hockey sense," and it can't be taught, Skilliter said. Successful officials tune into their hockey sense by blocking out personal off-ice issues at all times, he said.

"When we have days off, we call them 'GTL' or gym/tan/laundry days," Skilliter said. "At our level, if we don't work, we don't get paid, so we try and stay as healthy as possible."

Since becoming a full-time official this season, Stagnone has worked 94 games between the ECHL and the slightly more skilled American Hockey League.

Working developmental leagues required him to live in Omaha, Nebraska, for the last two years. This season, Stagnone relocated to Greenville, South Carolina, to work as one of 69 linesmen for the ECHL's southeastern teams.

The men are competing against others in the field for a narrow chance in the NHL while making little pay; officiating in the lower leagues may seem like it has little to recommend itself as a career.

Skilliter recommends having a solid back-up career in place, because leagues can only hire a few guys at a time. If you can't imagine not wearing the stripes, ask about officiating at your local hockey rink.

"You can have a career where you work 9 to 5, but it's not near as exciting as this," Skilliter said. "There are no guarantees. You have to put your life on hold and you never get to go home. You have to be a little nuts."

The pressure of making quick judgments on disputed goals or penalties is part of officiating life, but never so much as right now during the playoffs.

"In the playoffs, when the crowd gets going and there have been some big hits and things are going crazy, you don't know what to expect next," Stagnone said. "That's when you just kind of think to yourself, 'Wow, this is a pretty good job.'"