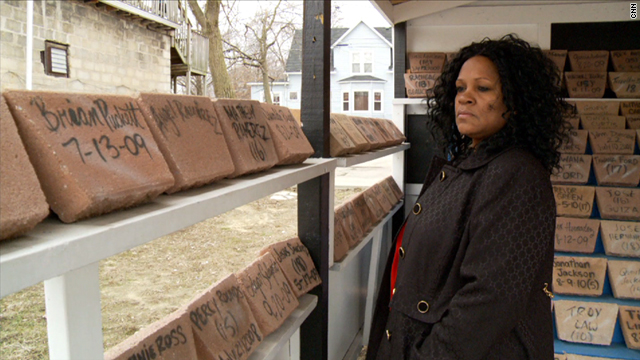 (CNN) -- In the first three months of this year, there were 73 homicides in Chicago -- and nearly half the victims were 25 or younger.

Gang violence is especially rampant in the Roseland neighborhood that CNN Hero Diane Latiker calls home. But she's on a crusade to make her community safer for its youth.

Latiker started a nonprofit program called Kids Off the Block, which has been giving young people an alternative to street life since 2003.

Latiker, 54, recently spoke with CNN's Allie Torgan about the stone memorial she created in Roseland. The stones in the memorial represent each local youth who has been killed in recent years.

Allie Torgan: Why did you create this memorial, and what inspired it?

Diane Latiker: The whole purpose of it being there is to shock the community and shock the young people that we're losing a generation to themselves.

Blair Holt was killed in May of 2007. He was on the CTA (Chicago Transit Authority) bus coming from Julian High School. A 14-year-old got on the bus with a gun and sprayed the bus. Blair Holt, he jumped over the girl next to him to save her life. And he was killed.

I was in Home Depot the day before his funeral, and I saw these stones and they looked like little headstones. And I said, "Wow, that would really get people's attention if we put their names on (them)."

Blair Holt was the first name that we put on a stone, and we put it on a little memorial and put the stones on there. It grew from those 30 stones to 220 right now. And we're 150 stones behind.

This memorial says more than there's a generation dying. It says, "What are we doing?" I know what we're doing. We're being silent. Where are we as adults? Why don't we question them and say, "What's making you angry?"

Torgan: What is Kids Off the Block doing to keep the headstone numbers from growing?

Latiker: I tell kids when they walk through the doors, "This is a peace place, this is a safe place." We've had six gangs in my living room at one time. ... But that was the safe place. And you know what? They respected that. They could sit down together, they could eat together and they could talk about their problems together because (the rule) was set when they came in the door.

I believe that I can do things and I can change people. And it's been working, because there's a generation that believes in what I'm talking about. You see that they've done something. And then they start helping you, and they start helping their families. And the gangs don't seem so important anymore. Or the guns. School seems important. And a job. That's what keeps me going.

Torgan: Tell me about Roseland and your hopes for its future.

Latiker: Roseland, right now, is in economic stress. The environment feels very hopeless, especially for young people. It's blighted: a lot of vacant lots, abandoned buildings, crime. But it's a community on the rebound, and it's because there are people here who care.

I thought about moving. But I decided not to. I'm not going anywhere. If more of us came outside, we wouldn't be scared.

I believe Roseland's going to bounce back. I just want to be a part of it.