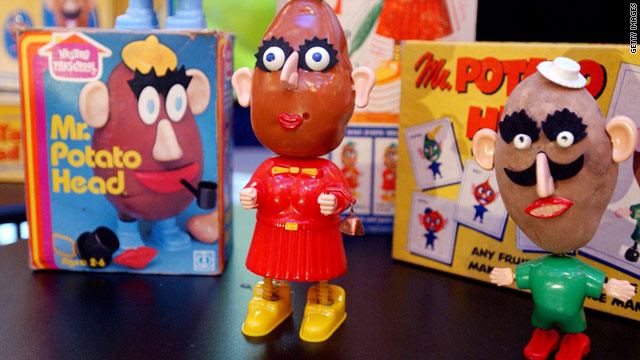 (Mental Floss) -- It started as body parts you jabbed into real potatoes and became a cultural phenomenon, resulting in some sweet film roles and government work. Let's go back to the beginning.

Brooklyn-born toy inventor George Lerner tries to capitalize on kids who like to play with their food. Surprisingly, Lerner's idea of creating face and body parts that can be jabbed into potatoes is a hard sell. Toy companies worry that parents who've just lived through World War II-era food shortages will balk at the thought of wasting perfectly good food.

Hasbro sees the genius in Lerner's product and agrees to market it, creating the first-ever TV ads for a toy. It turns out that parents have few misgivings about squandering their potatoes; more than 1 million Mr. Potato Heads sell that year alone.

Mental Floss: The map with only 38 states

Mr. Potato Head gets an arranged marriage. In 1953, Hasbro outfits him with an instant family: Mrs. Potato Head, son Spud, and a daughter, Yam. He also gets a car, a boat, and a kitchen in the deal. Within a few years, the likable Spud makes friends with pals Katie the Carrot and Pete the Pepper.

When parents complain about finding moldy potatoes under their kids' beds, Mr. Potato Head ditches his organic body for a plastic one. Ten years later, new rules about choking hazards compel Hasbro to merge the head and body into one legless lump.

Arnold Schwarzenegger and the President's Council on Physical Fitness give him an award for abandoning his couch-potato lifestyle. Curiously, his new healthy habits don't stop Mr. Potato Head from endorsing Burger King, McDonald's, Wendy's and Hardee's.

Mr. Potato Head trades his dapper hat for a green baseball cap and exchanges his loafers for blue tennis shoes. In keeping with his new, sportier look, he also quits smoking in 1987 for the American Cancer Society's Great American Smokeout. To show his support for the anti-smoking campaign, he publicly hands over his signature tobacco pipe to U.S. Surgeon General C. Everett Koop.

Mr. Potato Head makes his big-screen debut in "Toy Story", but his most prestigious gig is yet to come. In 2000, Mr. Potato Head becomes the official travel ambassador for Rhode Island, "the Birthplace of Fun," where Hasbro is headquartered.

And let's hear it for some of the best special edition Mr. Potato Heads: Optimash Prime, Tony Starch, Luke Frywalker, and Taters of the Lost Ark (known in some sets as Idaho Jones).