Is autocorrect out to get you? 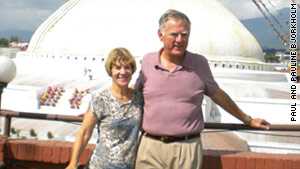 Paul and Pauline Bjorkholm didn't intend for their e-mail to send their daughter into a panic.
STORY HIGHLIGHTS

(CNN) -- Faster communications are not necessarily better, especially when a machine is doing the interpreting. It can cause real panic for recipients.

When retirees Paul and Pauline Bjorkholm decided to go on a monthlong trek through Nepal, their daughter and son-in-law were not thrilled at the idea. The thought of the couple in their late 60s hiking through the mountains in a foreign country halfway around the world worried the younger couple.

"We asked them to keep in touch at tea houses (internet cafés) along the way, thinking it was the best way to ensure they were safe," said their daughter, Jill Easter.

But the very first e-mail from Paul Bjorkholm read: "Help. Visa bad. Can you send money to water? Autopsy not working."

"I freaked out," said Easter. "It took about $150, 16 hours and a number of calls to the U.S. Embassy. I even faxed the next hotel pictures of the two of them so that they could be on the lookout."

What the Bjorkholms meant was that they couldn't use their VISA credit card to pay the water bill and in their haste to send the e-mail, "auto pay" had been changed to "autopsy" by autocorrect.

"Once we figured it out, we could laugh about it. After that, my mom wouldn't let my dad e-mail the rest of the trip," Easter said.

But the Easters and the Bjorkholms are not the only ones who have had messages gone awry in this age of instant communications.

Close to 200,000 text messages were sent every second in 2010, according to the United Nations International Telecommunication Union. Add in more than 107 trillion e-mails in the year and you have a perfect environment for miscommunication.

"It's suddenly so easy to reach so many people and since it's text-based, it's much more permanent. You are on the hook, basically forever, for whatever you text or e-mail," said Eric Waller, co-founder of the website didijustsendthat.com. The site is devoted to message gaffes, whether it's autocorrect mistakes or sending a text to the wrong person.

Waller and his friends cooked up the idea for the website when one of them accidentally sent a text message to the wrong person and it became a source of chaos.

"Texting and e-mail definitely makes it harder to understand nuances and there's potential for lots of problems," he said.

Experts speculate that the ubiquity of these short bits of information has had an effect on our personal and professional relationships, and thus increased the chance for miscommunication.

But, according to Vadim Lavrusik, community manager and social strategist at Mashable.com and an adjunct professor of journalism at Columbia University, these kinds of mistakes are a natural part of learning about any new communication technology.

"I think the big thing about any of these new communication streams is that it takes time to adjust to them and really learn them. When Facebook came out there were all these horror stories about someone posting something that they didn't realize everyone would see. Now you have horror stories about bad texts and e-mails."

Lavrusik believes that text messaging in particular is still being adopted by a lot of individuals and businesses and that it's a more intimate form of communication.

He also argues there's a greater sense of urgency to a text message. "When that SMS comes into your phone and you see that message, it's something you cant run away from. There's a sense that that message will be read immediately versus an e-mail or a voice mail."

But Sherry Turkle fears that the speed of communication is leaving some with very little to communicate about.

"We are never not texting each other. There's an instinct to never be alone for one second, causing us to lose the capacity for solitude. Sometimes we are so busy communicating that we don't have time to collect ourselves or even connect with each other on things that matter the most," said Turkle, author of "Alone Together: Why We Expect More from Technology and Less from Each Other. "

She argues that the availability of technology allows us to "bail out at any time."

"Any time something becomes uncomfortable or if you don't like the conversation, you can simply go to another place by tapping into your smartphone and texting someone."

She argues that this kind of access allows us to avoid conversations because it's easier to text or e-mail and avoid facing an issue head on. She is especially concerned about what this behavior means for teenagers and young adults because she feels that it's important to teach them how to exist in an uncomfortable moment rather than running from it.

Scott Campbell, an assistant professor of communication studies at the University of Michigan, also warns that cell phones, iPads and smartphones can cause a behavior of "absent presence," or being physically present but mentally elsewhere.

Then there is the ever widening divide between those born with a computer in their hands and those who still struggle to master this "new" technology.

Campbell believes this can cause a lot of interpersonal problems, especially across generations, because older adults often don't understand how younger adults and teenagers are interacting with the technology.

Despite their misadventure with her parents' electronic communication, Jill Easter still prefers to communicate via text messaging.

"I think for me, I like texting because it gets right to the point if you are busy, and it's personal," Easter said.

Her husband, Kent Easter, agrees, but also warns texting works only when you have a personal relationship with someone.

"You have to have a level of intimacy with someone to text them because the message is so constrained. If you don't know someone, you are left with the raw words and often times you don't know what the thought is behind it."