Help! My boss is flirting with me 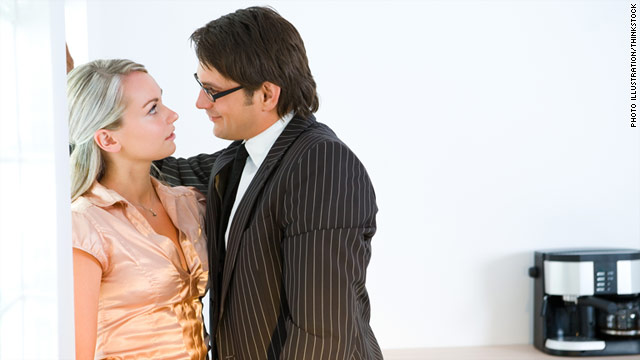 If the thought of confronting your boss face-to-face makes you feel uncomfortable, try to favor meeting in group settings.
STORY HIGHLIGHTS
RELATED TOPICS

(CareerBuilder.com) -- Sometimes it seems as if not everyone got the memo about taboo behaviors in the workplace.

While the first two examples are annoying, the final one is annoying, rude, awkward and counterproductive -- not to mention potentially illegal. A flirtatious boss can mean an uncomfortable workday and a desire to avoid the one person you probably need to interact with regularly while on the job. In order to regain your sanity and a reasonable level of comfort at work, it's necessary to defuse the situation ASAP.

There are times when simply ignoring the unwanted advance is enough to stop the situation.

"Act like you don't even hear it," says Karen Jones, an author who has experienced more than one flirtatious boss in her career. "Maintain eye contact and keep up the conversation. If you pretend to not understand and refuse to rise to the bait, they usually back off."

Unfortunately, though, not everyone gets the hint that they're being ignored or that their advances are unwanted, so additional steps may need to be taken to quell a flirting boss. Here are some do's and don'ts for responding to a flirting boss:

Flirtation that may initially seem innocent enough can quickly escalate to harassment levels, so it's important to remedy the situation before it gets out of hand says Dennis Golden, CEO of IM-Safe LLC, a training and education firm that teaches women self-defense. "The advice we give is to address the problem with a firm clear response, indicating [that you] do not appreciate the actions," Golden says.

It can be tough to address your boss straight on, but Golden says this is necessary to prevent the situation from escalating -- especially for women. "Women by nature are nurturing and often tend to tolerate flirting in the hope it is innocent or will go away," he says.

Lynn Taylor, a national workplace expert and author of "Tame Your Terrible Office Tyrant," says: "The moment you detect inappropriate behavior, questions or statements, make sure your response conveys disapproval. Your pursuer may become increasingly aggressive and your 'shyness' may be taken as consent."

Don't start believing that your success in the workplace is a result of your boss's attraction toward you, Taylor says. "You are there on your own merits, and if you start believing otherwise, you may lose confidence in your abilities. That could hurt your self-esteem and even affect you in your next job. Ensure that you're always taking your career to the next level."

Though it's important to confront your boss directly, it's also important to remember that you have to continue working for this person, so a tactful approach is key.

"Express your discomfort in a gracious way that doesn't condemn [him or her]," says Irene Levine, Ph.D., a professor of psychiatry at the New York University School of Medicine. "Instead, take responsibility yourself. For example, you might say, 'I always prefer to maintain a strictly business relationship at work. I know you're kidding around, but it makes me feel uncomfortable.'"

If the mere thought of confronting your boss face-to-face makes you feel uncomfortable and anxious, or if you've confronted your boss and he or she is still coming on to you, try to minimize the time you spend together one-on-one, in favor of group settings.

"Be jovial, but keep your distance," says Tina Tessina, Ph.D., a psychotherapist and author of "Money, Sex and Kids: Stop Fighting about the Three Things That Can Ruin Your Marriage." "Never be alone with this man, if you can help it. If he's called on it, he can say you encouraged him, so you want to make it clear that you are not. If he calls you in to his office, try leaving the door open."

Though it may sound obvious, avoiding situations where you're alone with your boss is one of the easiest ways to prevent uncomfortable situations.

Do: Drop a not-so-subtle hint

Your boss may be less likely to flirt with you if he or she knows you have a significant other. A subtle but clear way to drop the hint? Jo Murray, owner of Jo Murray Public Relations, offers this tactic that has worked for her: "Tell [your boss] you respect his opinion enormously and you need his help. Your husband/boyfriend has a birthday coming up, and you would like his advice on a gift. It works even better if it's an older boss. I used this several times as a young woman, and it was fantastic. Of course, it doesn't really matter whether you have a boyfriend, much less whether it's his birthday."

Tessina adds, "Frequently ask him how his wife and children are, if you know he has a family."

This advice is applicable to male workers with flirtatious female bosses, as well.

"Conservative work apparel is a good overall policy for career advancement, but when faced with this situation, it's imperative," Taylor says. "You don't want to send mixed messages to the person with whom you're spending most of your workweek."

If you've tried handling the situation yourself to no avail, look into your office's sexual harassment policy, advises Tessina. "If all the distancing fails, and he persists, you can quietly but firmly say, 'Mr./Mrs. X, I believe the company has a no-sexual-harassment policy. I'd hate to have to use it.' Before you do that, you might want to enquire of human resources what the policy is, just to be informed. If even that doesn't work, then you have no recourse but to report it."

Of course, sexual harassment violates federal law, which supersedes any company policy that might exist in your workplace. If you find yourself the victim of sexual harassment, consult someone you feel comfortable with -- a friend, a lawyer, human resources, the authorities -- so that you can properly address the issue.