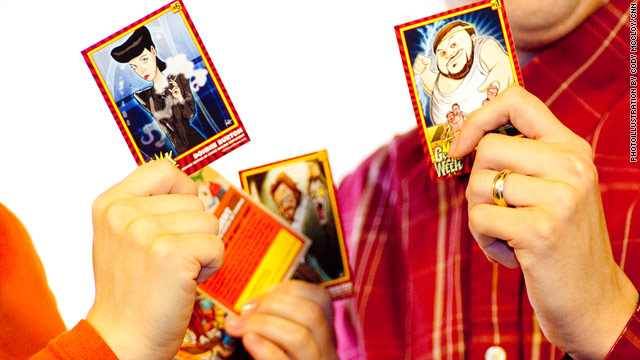 Nerds can collect and trade their favorite geek heroes thanks to "Geek a Week."
STORY HIGHLIGHTS
RELATED TOPICS

For the last 52 weeks, artist Len Peralta has been interviewing one geek hero a week, posting podcasts of his discussions online and designing the front and back of a trading card. (Comedic music duo Paul and Storm write the descriptions.)

The cards show a picture on the front of a celebrity in the geek world, stylized as an iconic character from sci-fi or fantasy. The backs offer a description of the characterized geek and an amalgamation of Dungeons & Dragons and Pokemon-stye attributes.

The only thing missing is a dry, tasteless piece of gum.

"We're releasing them in waves of eight going in order, so there actually will be 56 cards total," Peralta said. "So there will be four secret geeks included." Already in the collection of 52 are such geek luminaries as Weird Al, Phil Plait, Felicia Day, Dana Snyder and Steve Wozniak.

Peralta has gone from fanboy to respected interviewer and entrepreneur thanks to this geeky experiment.

As "Geek a Week" card No. 47, Douglas was portrayed as "The Comedian" from Alan Moore's graphic novel, "The Watchmen."

"I love the sneer and the cigar. I love that I am a badass (geek). I love that you can be badass and a geek and I think that Len nailed it," he said.

Neil Gaiman, author of "The Sandman" comic books and novels like "Stardust" and "Coraline," was "Geek a Week" card No. 35, depicted as "The Vault Keeper."

"The depictions of people on the 'Geek a Week' cards are always fundamentally iconic," he said. "For a storyteller, there's probably little that's more iconic than one of the old EC Comics horror hosts."

"Obviously, I was consumed with bitter envy with my friends who were depicted as superheroes," he said, but admitted he would rather be cobwebby and in a crypt somewhere.

Douglas said the trading cards are unique because, "It is a window into the lives of people you wouldn't otherwise get to know in this way. It shows that it is cool to be a geek and that there are many very cool people who have a whole geek side that their professions don't allow out."

"Part of the fun of geek a week is actually celebrating the people who don't normally get their cards," said Gaiman.

"Because if you ask your average person in the street who Jonathan Coulton was, they might look at you with puzzled eyes and hazard a guess as to possibly someone in baseball or maybe a politician. But if you're on the right college campus or on the right internet site and mention Jonathan Coulton, you will see eyes that light up and people salivate and start humming songs and it becomes this sort of bonding thing."

Kari Byron -- "Head Rush" host, part of the "Mythbusters" team and "Geek a Week" card No. 36 (as the Tomb Raider) -- said, "He really captured what people actually look like. He definitely got the essence of people."

"He's honoring people that are sort of outside the box. It's not Lady Gaga or the glamorous (celebrities), it's kind of Dragon*Con culture people," Byron said. "(No. 51) was Nolan Bushnell, the 'godfather of gaming,' he called him. I really like the fact that he's honoring a different sort of person."

"I think geek is definitely a career path you can take now. It's become something you don't have to be ashamed of. If you're good at math, you like comic books and you watch 'Buffy the Vampire Slayer,' it's not uncool anymore," she said. "The commercialization of nerd-dom made my career."

To commemorate the debut of the "Geek a Week" cards, ThinkGeek is holding a weeklong charity auction of items related to the geeks of the weeks -- including an action figure of Chief Tyrol from "Battlestar Galactica" signed by Douglas, honey from Gaiman's private apiary, signed editions of the first set of Geek a Week cards and original props from "Mythbusters."

Peralta is still amazed at how his project has turned out.

"It's weird, because I'm just a fan," he said. "I'm no one. I'm an unknown artist and to have (celebrities donate to the charity) like that is really edifying."

On his journey to a nerdy career, Peralta has learned "it never hurts to ask," and he's been able to connect to geek royalty through the relationships he fostered along the way.

"I guess what I've learned is that being friendly, being honest and open and just being a nice person still counts in this world," he said.

Peralta found that his heroes were unpretentious and normal, but that didn't do much to stop the butterflies in his stomach.

"Honestly, I never stopped feeling like a total nerd. I always felt like I was still not able to approach the cool-people table, like in high school," he said. "The phrase I've been using is, I felt like a nerd among nerds."

But the nerds love his work.

"I really like the Bonnie Burton (card)," Byron said. "She's just so gothy looking, it's great! He definitely captured her."

"I want mine, obviously, because dammit, I want my card," Gaiman said. "And I want Paul and Storm's, because I got to write the back of that one."

Douglas said he wants all the cards. But thanks to a frenemy relationship with "Geek a Week" card No. 14, "If I had to pick one," he said, "Wil Wheaton, so I can tape it to my dart board."