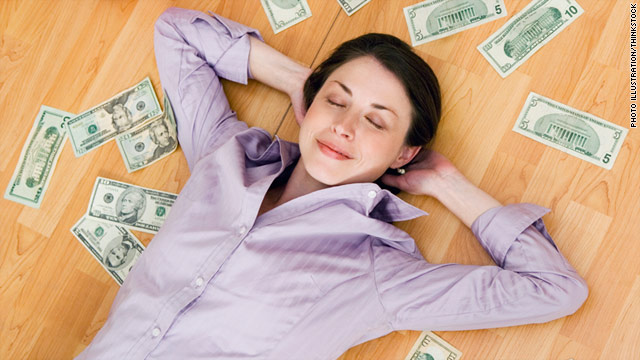 Focusing your attention on the aspects of your life that will make you happier right now can fulfill your true desires.
STORY HIGHLIGHTS
RELATED TOPICS

(Oprah.com) -- "Life would be so great," said Ilsa, a fledgling entrepreneur, "if I could just start a business to pay all my bills." Another client, Sue, wanted to have a baby. "Being a mom would make me happier than anything in the world," she told me.

Like any codependent life coach, I wanted everything for Ilsa and Sue that they wanted for themselves. I longed for a magic wand that would let me bippity-boppity-boo their dreams into reality, fairy godmother-style. Instead, I did the next best thing: I worked with them as they made to-do lists and financial plans and stocked up on computer software and folic acid.

Although it seemed like a good idea at the time, my boosterism had some significant blowback. You see, Ilsa's business did succeed, but its rapid growth required her to work like a pack mule.

Sue eventually had a baby, who filled her heart with love -- and her ears with colicky shrieking that nearly unhinged her. Both women were in more distress after achieving their goals than they'd ever been before.

I blame myself. In my fairy godmother role, I should've paid less attention to logistics and probed deeper into the reasons Ilsa and Sue had focused on those particular ambitions, because stated goals are quite magical. They dictate our attitudes and behavior and where we put our energy. But using magic inexpertly, as most fables (and almost every Harry Potter movie) can attest, is a bad idea.

After years of helping clients like Sue and Ilsa, I learned how to help people set goals to get what they want without unintended consequences.

The difference between a dangerous spell -- um, I mean goal -- and a safe, effective one has everything to do with parts of speech. Most goal setters use mainly nouns and verbs ("I want my business to succeed," "I want to have a baby"). This frequently leads to either outright failure or the kind of success that doesn't make people nearly as happy as they expect. But there's another class of words that work much better -- adjectives.

I've come to depend on adjectives because goals made of nouns and verbs are risky: They bring to mind "imagined situations," as opposed to "imagined experiences." The two are subtly but crucially different, and experiences, not situations, are always what we really want. Ilsa expected business success to produce feelings of contentment; Sue thought a baby would make her feel loved. Neither fully anticipated what would happen after they achieved their goals.

By using adjectives, you can avoid this trap by focusing all your efforts on the quality of the experience you want to create. This process is harder than "normal" goal setting -- it requires some serious soul-searching and perhaps a good thesaurus -- but it does pay off.

Oprah.com: How your words create your world

Step One: Pick a goal, any goal.

Think of a typical noun-verb goal, something for which you frequently hanker. Be honest rather than politically correct. Some people may have deep desires to establish world peace, stop global warming, and end poverty, but maybe you actually think more about, I dunno, reaching your target weight. And that's okay.

This is not a beauty pageant (those contestants can afford to wish for world peace; they've all reached their target weight). What I want you to do is fess up to your real desires. Now pick the biggest, most ambitious one.

Step Two: Gaze into the future.

You don't need a crystal ball to see what's up ahead; the three pounds of gray matter between your ears will do fine. Use your brainpower right now to imagine what your life would be like if you realized the goal you just identified. Create a detailed fantasy about it. Loiter there awhile, observing your dream-come-true with your mind's eyes, ears, nose, skin. Then, clear your mind and your throat: It's time for the magic words.

This is the heart of a really effective goal-spell. Begin listing adjectives that describe how you feel in your dream-come-true scenario. This is a simple task, but not an easy one. It requires that you translate holistic, right-brain sensations into specific, left-brain words. Author Craig Childs compares this to "trying to build the sky out of sticks."

Spend enough time in your imagined situation to let your brain leaf through its vocabulary, scouting out accurate adjectives. In goal setting as in fairy tales, the minimum magic number is three. Don't stop until you have at least that many ways to describe those lovely feelings.

Your adjectives don't have to be eloquent; use simple words like energetic, focused, delighted, and fine. But you owe it to yourself to persevere until you've found some reasonably descriptive words. Three of 'em. Write them down and then share them below in the comments:

Oprah.com: Are you a dreamer or a doer?

Step Four: Focus on anything that can be described with your adjectives.

Drop the fantasy situation you imagined in step two and concentrate on those adjectives. You might notice that these three words bring your stated goal into sharper focus.

For instance, if your New Year's resolution is to lose ten pounds -- a noun-verb goal -- but your adjectives are strong, confident, and healthy, you might realize that your actual aim is to get fit. You would see that the strategy you came up with to diet (i.e., eating your weight in hydroponic cabbage) might leave you thinner but also recumbent on a couch without the energy to leave the house -- which isn't what you really want.

Thanks to adjectives, you can fine-tune your strategy: Swap a fad diet for a meeting with a nutritionist, and sign up for weight training classes at the gym.

For example, if you think you want to win an Academy Award, you may imagine your Oscar acceptance speech, and feel "valued, satisfied, and unstoppable." If you think that only a night at the Kodak Theatre will lead to those feelings, you might spend years obsessively pursuing movie stardom, ignoring everyone and everything except your ambition. Odds are you still wouldn't win an Oscar, but you'd probably get a rapacious ego that could inhale all manner of rewards without even noticing them.

On the other hand, if you immediately begin focusing on aspects of your present life that make you feel valued, satisfied, or unstoppable, you'll feel an instant lift. All sorts of things may happen. Sure, you might win an Oscar. But if you don't find yourself onstage, blurting out that the statue sure is heavy, you'll be left with...a pretty good life. You might even find that as you follow the things that make you feel appreciated, you've tripped into an entirely different career.

So starting now, survey your life for anything (I mean anything) that can be described with any of those three words. Putting all your attention on those aspects of your life will make you happier right now and help you create future situations that fulfill your true desires.

Oprah.com: Are you on the right course?

The science of good magic

I realize that all this sounds a little woo-woo, but psychological research on happiness backs up my strategy. Over and over, researchers studying happiness have found that the situational elements people crave -- money, social status, possessions -- don't reliably lead to an experience of well-being.

By contrast, learning to find joy in the present moment (a.k.a. focusing on experiences you truly want in your life) increases life satisfaction, improves health, and allows us to live longer, more fulfilling lives.

My clients form my own database of sorts, convincing me that good goal-setting magic is (to use the social science terms) robust and valid. For example, when I asked Ilsa to go back in time and imagine what she once thought she'd get from a successful business, she described herself with the adjectives relaxed, joyful, and secure (ironically, the demands of her wildfire success made her feel tense, joyless, and insecure).

When she scanned her life for activities and relationships that made her feel aligned with those adjectives, she found them everywhere: in gardening, reading novels, playing with her niece. "Damn!" she told me. "I'd already succeeded before I succeeded!" Indeed.

In Sue's case, remembering how she'd expected motherhood to make her feel yielded the adjectives loved, rejuvenated, and emotionally replenished. She realized that her noun-verb goal (having a baby who's beautiful and also colicky) actually created the opposite of her adjective goal -- she felt unappreciated, haggard, and drained. It turned out that her magical adjectives described the way she felt when connecting with old friends.

Both Ilsa and Sue managed to give more attention and time to the things that evoked the feelings they really wanted. (That's the beauty of adjective-based goals: They can work even when you're already suffering the consequences of unwise noun-verb spells.) Ilsa carved out time for reading and gardening; Sue put the baby in the bouncy seat and caught up with friends on Facebook.

These efforts helped Ilsa and Sue work and parent better, and handle the difficulties conjured by their original goals, all of which eased my fairy godmother guilt.

In other words, we lived happily ever after.

So if you find yourself longing for some idealized goal, take a moment to go fishing for adjectives. Then use them to identify the aspects of your life that are already drawing you toward your heart's desires. Focusing on these people and activities will lead you gently toward even more fulfilling experiences.

One day you may find yourself in a situation more interesting and delightful than anything you ever imagined. Listen closely and you'll hear my annoying little voice in your head, whispering, Bippity-boppity-boo.

Oprah.com: How to (finally) keep your New Year's resolutions