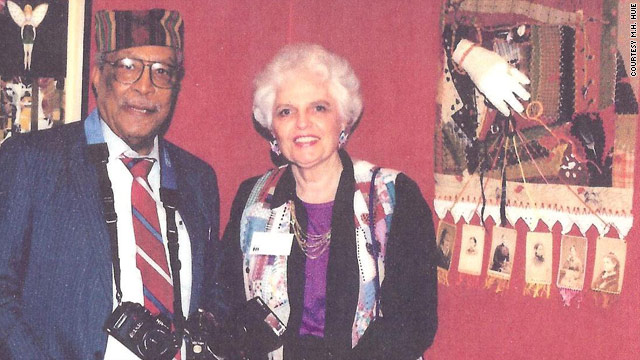 Photographer Ernest Withers and artist Martha Huie in front of her artwork at a 1997 exhibition in Memphis, Tennessee.
STORY HIGHLIGHTS

"I answered the phone, and he identified himself and wanted to speak with Ernest Withers. I said, 'This is not Ernest Withers!'" Huie recalled, laughing.

Last year, she learned the likely reason for the call was no laughing matter. In 2010, The Memphis Commercial Appeal revealed that the friend she knew for almost 20 years was an FBI informant.

As the pre-eminent photographer of the civil rights era, Withers had close access to leaders of the movement. To some, charges of informing represented a betrayal of the highest sort. But not to Huie.

Watch the trailer for In America's documentary about Withers, "Pictures Don't Lie"

"I can't think about why it was presented in such shock value," Huie said. "A lot of people talk to the FBI. If the FBI wants to talk to you, you talk to them. It's just not a horror story, and Ernest just doesn't deserve that."

Huie met Withers at a contemporary art show in Memphis in 1988.

"We were the senior people there!" she laughs. "That was how Ernest and me started talking." 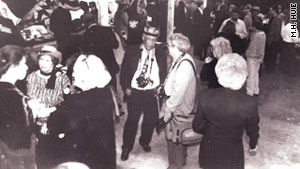 One of Huie's photos showed Withers socializing at a Memphis art show in 1995.

He was black. She was white. He grew up poor in Tennessee. She had a relatively privileged upbringing in Alabama.

Huie's late husband, William Bradford Huie, was a celebrated author and investigative journalist who chronicled the events of the civil rights movement and broke the story when two white men confessed to the 1955 murder of Emmett Till, a black teen.

Withers, too, had covered the Emmett Till case. Huie and Withers formed an immediate bond over the journalistic work, but it was their mutual appreciation of art and history that kept them talking.

The photographer shared stories about his experiences during the civil rights movement and how he learned to use a camera.

In one conversation, Withers told Huie how he learned to see color.

"When he was a young boy, his mother died. His stepmother was his mother. And she sewed. She made things for rich white women, and she would send him to the store to buy thread," Huie said.

"And if he didn't come back with the exact right color, he would have to go right back. And there's where he learned to see matching colors."

When an FBI agent called Huie a second time in 2005, she assumed again it was a mistake, and gave the agent Withers' number. She still doesn't know why they called her house.

When Withers died in 2007, his funeral was front-page news in Memphis. Huie and Withers never spoke about his involvement with the FBI, and she isn't concerned that the information will affect his legacy.

"Ernest was not a traitor, or doing anything political or underhanded," Huie said. "If the FBI wanted to hand him some grocery money, then so what?"

While the civil rights photographer later became famous for his photographs, he never achieved fortune.

But, according to Huie, he lived a life rich in other ways.

"He tried his best every day of his life and made a lot of mistakes and laughed at himself," Huie reminisced. "He was on the right side all the way, all the time. And he played it like he needed to."