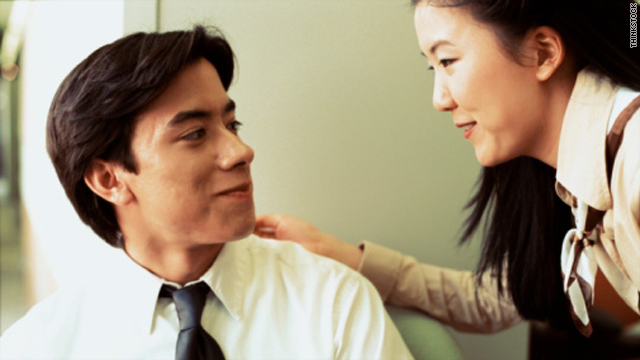 (CNN) -- Many people say they have what's known as a work spouse -- a co-worker with whom you have a close platonic relationship.

Certified career coach Hallie Crawford says you may have a work spouse if:

• You confide in them more than anyone else at your office about work issues.

• You spend a lot of time with them, almost as much time as you do with your spouse.

Forty-five-year-old Patty Lewis and 37-year-old Tom Brister know a thing or two about this. The technology consultants each have their own legally married spouses, but have considered themselves "spouses" at work for nearly four years.

"From a psychological and emotional perspective, he is the person I can tell anything to, and share any perspective with, no matter how mean-spirited or politically incorrect," said Lewis.

"Patty hears many of the same things reserved for my spouse, including who is annoying me at work, my true assessment of some of the projects at work and my current satisfaction level with my job," said Brister. 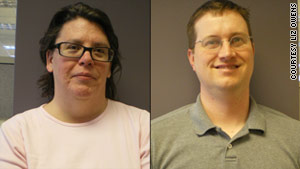 The pair met four years ago at their company in Northbrook, Illinois, and say they know each other so well that they can finish each other's sentences in the context of work -- and know details about each other like how they like their coffee and what they like to eat when ordering at a restaurant.

The work spouse team said their friendship has helped them with their careers and is "not just a water-cooler relationship" used to pass the time at work.

"We've used our relationship to rocket to the next level in our professional careers -- and have depended on each other to call out our bad work behaviors, figure out what is the most important work to be doing, and challenge each other to do the impossible," noted Brister.

Work spouses are often labeled as close work friends of the opposite sex, however one researcher finds this is not always the case.

Twenty percent of people surveyed said their spouse was jealous of their "counterpart" at work.
--CareerBuilder.com

"We've researched instances where heterosexual individuals have work spouses who are of the same sex - and many examples of work spouses where one is heterosexual and the other is gay, lesbian or bisexual," noted Chad McBride, an associate professor who studies these relationships at Creighton University.

A CareerBuilder.com survey found 11 percent of workers felt they had a work spouse -- and while it's beneficial to have an ally at work, 20 percent of people surveyed said their spouse was jealous of their "counterpart" at work.

"My husband has mixed feelings -- he recognizes that my relationship with Tom has been good for my career, but there has been at least one occasion where I turned to Tom first, when I should have turned to my husband," Lewis said.

There can be other issues, too.

Co-workers might perceive that something inappropriate is going on between the work spouses, which can lead to a lot of different problems, including workplace jealousy, said McBride.

A work spouse can provide emotional support and someone to confide in at work.
--Hallie Crawford, career coach

There are positive points to having a work spouse relationship, too, according to Crawford.

"The pros are that you have someone who knows you well to bounce ideas off of and help you with potentially stressful issues at work," noted Crawford.

The career coach says a work spouse can also provide emotional support and someone to confide in at work -- and may understand your strengths and weaknesses and can complement you well on work projects.

Crawford has tips on how to manage a work spouse relationship in order to keep it professional. She suggests:

1) Be up front about what the relationship means to you when you're communicating with them and always provide clear boundaries between work and personal issues.

2) Don't do or say anything to them you wouldn't want your spouse or significant other to know about.

3) Keep physical contact to a professional level --a handshake, a pat on the back -- and be mindful of what's appropriate for your corporate culture and your relationship with that person as a professional.

As with many relationships, the dynamic of the work spouse pairing recently changed for Lewis and Brister.

Lewis left Illinois to take a job in California in November and they no longer work in the same office.

But they still both consider themselves work spouses despite the geographic distance.

"Yep, we still talk a couple times a week and discuss our individual issues at our respective jobs," said Brister.

We hope to maintain this relationship into the future, too, said Lewis.