The people who plan your next Christmas Atlanta (CNN) -- By now, Christmas merrymakers have packed away the decorations and may even have paid off their holiday shopping sprees. But while the rest of us have moved on to Valentine's Day, Cin Davidsen is still surrounded by glittery Christmas ornaments.

Since the end of September, Davidsen said, the showroom she manages has been a veritable glitter explosion.

She works at North Star by Premier, a wholesale showroom in Atlanta's AmericasMart, and last month she presided over the store's 2011 debut of over 7,000 holiday decorations.

Every January, retailers from all over the world flock to AmericasMart for the eight-day holiday shopping frenzy called the Atlanta International Gift & Home Furnishings Market. More than 4,500 exhibiting wholesalers within AmericasMart's three city blocks show off their wares to visiting shop owners.

It's the kickoff to a year's worth of holiday shopping for boutiques, gift stores, florists, interior decorators and chain stores. So what can consumers expect to finally see in local shops, many months from now? 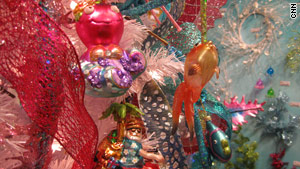 North Star by Premier shows off whimsical ornaments with an undersea theme.

"There's a real trend towards vintage ornaments this year," said Justin Spath, a buyer for the Santa Claus Christmas Store in Santa Claus, Indiana. "We're seeing a lot of retro ones, back to Victorian and even 1950s and '60s. There's a lot of people going back to the traditional Christmas look (more) than they have the past few years."

"The trends that I'm seeing for this year that are different are the mixed colors," said Kim Casto, owner and buyer for GeNell's Flowers in Piqua, Ohio. "Like, really bright. I think people want to be festive and happy. They want that bright colorfulness (to) bring into their home."

"It's traditional red and white with hints of lime green. That lime green has really become one of the traditional colors for Christmas. It just pops. Everything that it's on, it just pops."

Nickie Sfamenos, the showroom manager for wholesaler Regency International, said their line of peacockish blues and greens was a particular favorite of stores in New Orleans. She said icicles and anything with a snowy look were popular with wedding planners for winter nuptials.

East Coast area stores and large aquariums will likely carry some of North Star by Premier's "Under the Sea" line, which features whimsical fish and bright Caribbean colors, said Davidsen. Another of the company's lines, "Calypso," is popular in the Deep South and South America, she said.

Wholesalers like Neal Goldman, the president of North Star by Premier, recently finished a year's worth of work designing ornaments, overseeing the manufacturing process and fulfilling clients' orders. And now they're starting all over again.

"Most of our product is hand-produced," Goldman said, noting that all the company's glass ornaments are blown by artisans, not machine-made. All the glitter on the ornaments is painted on by hand, added Davidsen.

"The production times are significant. So by taking orders in January, we ship (the holiday merchandise) in proper time for the retailers to get it in time to show for Christmas," Goldman said. 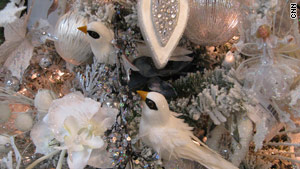 Like many wholesale companies, North Star by Premier goes overseas to design its decor lines and have the ornaments manufactured, Alice Goldman said. Her husband, Dan, and son Neal run their 62-year-old family business.

"It's a long trip" to design the ornaments with the factories, she said. "They work seven days a week, and they're gone for five weeks and change."

Once the designing and manufacturing is done, the merchandise has to travel back to the United States by boat, she said. "We start delivering in May and June. People want their orders from May through November, because they have to get the merchandise into their stores, into their stockrooms."

And while all that work is happening for the current year's holiday shipments, wholesalers are already thinking a year ahead.

"We've just gotten through the big shows, and we see the trends and we see what people are asking for, and we actually start thinking about it and putting our basic thoughts down right now."

They send the next year's artwork and manufacturing directions to factories starting in June, McDonald said. In July and August, his company will send people overseas to start working with the factories, finalizing their 2012 ornaments and decorations in September and October.

It usually takes between 90 and 120 days to manufacture a wholesaler's line of products, McDonald said. Many wholesalers choose to go to Chinese factories to manufacture their ornament lines. Those 90 to 120 days encompass gathering raw materials and wooing a skilled workforce away from steadier jobs in computer manufacturing, he said.

Once the merchandise is made, the wholesalers send sample ornaments to their showrooms, which, by October, are being decorated for the next Gift & Home Furnishings Market. It often takes three months to completely decorate a showroom.

By comparison, it's relatively easy for the average consumer to choose from a dizzying array of shiny ornaments in a store. According to Hooper, shoppers did so with enough verve last holiday season to deplete a lot of the inventory that boutiques had been holding on to. 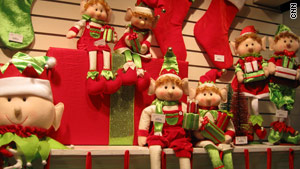 A splash of lime green shows up on decorations at the Joseph Warren Miller Company.

Hooper said for the last two years, many of the retailers visiting her store have been nervous about the economy. Instead of buying a lot of new merchandise at AmericasMart, they've been stocking shelves with ornaments left over from previous years.

"A lot of our customers, whether small or large, indicated that the fourth quarter Christmas sales were outstanding, so they were able to deplete a lot of that inventory," she said.

And now those boutiques and specialty stores are ready to replenish their stock.

"Generally, my budget is several thousand dollars for each showroom, and so far I've been doing my job," said Casto, the Ohio flower shop owner, as she looked around the Gift & Home Furnishings Market.

"I'm wearing very comfortable shoes, because it's like a marathon," said Spath, the buyer for the Indiana Christmas store.