The other big game this weekend: Puppy Bowl 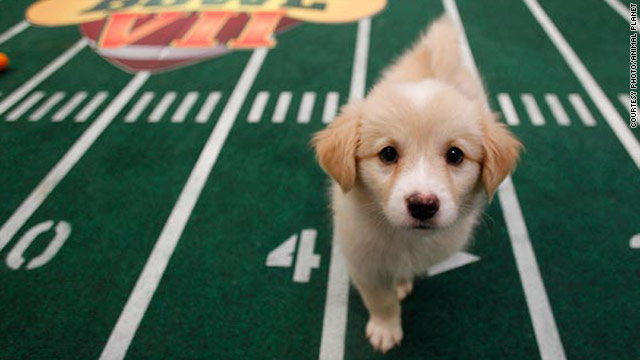 Aries is one of the puppies featured in Puppy Bowl VII.
STORY HIGHLIGHTS
RELATED TOPICS

(CNN) -- Canine chaos reigns at the Puppy Bowl, Animal Planet's adorable response to the other big game this Sunday.

What started seven years ago as a network space-filler is now an annual event watched by more than 8.6 million people. Executive Producer Melinda Toporoff said no one expected such a tremendous public reaction.

"At first, it was kind of like our Yule log -- we just needed to put something on TV during the Super Bowl," she said. "But it has transformed from style over substance to a lot of substance. We're all pleasantly surprised by how well it does."

Aside from boosted ratings, the Puppy Bowl -- a mock football game played by puppies drafted from shelters across the country -- offers help for homeless animals.

"It's really a call to action," Toporoff said. "We want to raise awareness for shelters everywhere and get more puppies adopted."

This year, Puppy Bowl VII featured 20 players in the starting lineup. Among them were Oliver, a 9-week-old Great Pyrenees who, according to Animal Planet player stats, is a movie buff, and Brownie Sundae -- a 10-week-old cocker spaniel mix with a knack for spelling bees.

"There's lots of backstage cuddling," said Puppy Ref Andrew Schechter, who describes his referee role as "more of a glorified pooper scooper." "We're lucky that all the puppies are the most adorable puppies possible."

The puppies score touchdowns by dragging a chew toy over the goal line. At the end of the game, the "Most Valuable Puppy" is selected based on athletic performance and minimal napping on the field -- though no one's sure if participants are cognizant of the competition.

"The show is very tongue-in-cheek," Schechter said. "It's cute and fluffy and fun, but the idea is to help the puppies."

More than 250 animals have been adopted through Puppy Bowl since 2004, he said.

By the time the show finishes recording in October (for editing reasons, Puppy Bowl can't be live), most of the "starting" puppies have already found homes. Big Red -- a shepherd mix featured in Sunday's game -- is still waiting for an owner, however.

"Everything's really evolved since the beginning," Schechter said. "It's something we're really proud of."

New this year, chicken cheerleaders squawked from the sidelines. Pet owners submitted online videos to the "kiss cam," which will showcase intermittent human-pet displays of affection.

Kittens returned to jump around in a frenzy of lights and streamers during the halftime show.

Schechter said the show is full of surprises, including an instance of "puppy indecency" in 2009.

"Cover your eyes, folks!" the announcer declared during Puppy Bowl V. "We've got a streaker!"

"I got her. It's OK," Schechter said, gently lifting the traditionally furless pooch. "Come on, you're out of here."

Toporoff said it's all entertaining.