What happened when Weird Al grew up 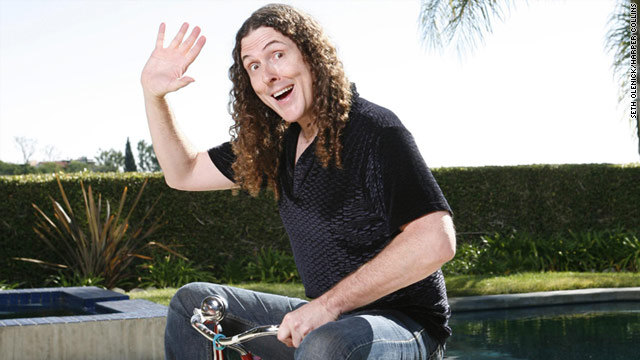 (CNN) -- "I mean, I hate to gloat," Weird Al Yankovic said, "but I'm extremely satisfied with my position in life and the way things have worked out for me."

For over a quarter of a century, Weird Al has made a career out of his two passions: music and comedy. His parodies and satirical songs and videos have amassed an army of devoted fans -- 2 million of them follow him on Twitter. He's won three Grammy Awards and has sold more comedy albums than any other artist in history.

Not bad for a nerd out of Lynwood, California.

And now, the Hawaiian-shirt-wearing, accordion-playing, curly-haired pop satirist can also call himself a children's book author.

On Tuesday, Yankovic's book, "When I Grow Up," lands on shelves. The book, published by Harper Collins, brings Yankovic's signature brand of nerdy humor to what turns out to be a very sweet and empowering children's picture book. It centers on what Billy, an energetic 8-year-old, imagines he might be when he grows up.

Sure, it seems like writing children's books is becoming a popular pastime for attention-loving celebrities. But Yankovic found inspiration in, of all things, his father's career advice.

"As my father used to tell me, the only true sign of success in life is being able to do for a living that which makes you happy," Yankovic said. And what made him happy turned out to be a career that, Yankovic admits, no one in his family ever thought would go in the direction it has.

"One of the reasons I was inspired to write this book was because my career path was sort of circuitous," he said. "I went to college and got a degree in architecture, because when I was 12 years old I had a guidance counselor talk me out of my dream of being a cartoonist for MAD Magazine."

After three years at architecture school, Yankovic said, he realized it wasn't what he wanted to do. With the support of parents who weren't interested in pushing him into any specific career, but rather just "really wanted me to be happy," Yankovic took a chance on his passion.

"I suppose I had my rock star fantasies while I was singing into my hairbrush in the bathroom mirror, but I never really consciously said, 'OK, this is what I'm going to do for a living and I'm going to be Weird Al.' My hobbies just sort of gradually became my vocation," he said.

Of course, Yankovic also saw a children's book as the perfect opportunity to indulge his quirky humor. As Billy tells his classmates in the book, "Maybe I'll be a gorilla masseuse, or an artist who sculpts out of chocolate mousse." In typical Yankovic style, Billy also suggests "professional pickle inspector," "big sumo wrestler," and "smelly pit-sniffing deodorant tester."

Listen to Weird Al read an excerpt from his book. 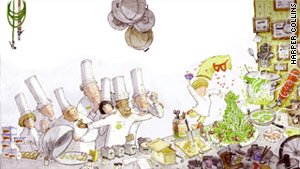 Billy, the main character in "When I Grow Up," imagines making a career out of some unique culinary skill.

Yankovic's favorite career in Billy's possible future? "Master debater," he said, with that instantly recognizable laugh. "I can't believe I got that through the censors. Actually I was on the speech team in high school so that probably is pretty close. "

"I don't know if Billy is obsessive-compulsive," Yankovic said, "but he seems to have a lot of ideas, his head is filled with a lot of random thoughts. I don't know if that's typical of all nerds, but that's sort of how my brain is. If I can extrapolate it, maybe that's something I share with Billy."

Lucky for Billy, Yankovic said, nerdy qualities come in handy professionally. He ought to know: Yankovic's unabashed and overt nerdiness was met with heavy rotation on MTV in the 1980s at a time when, he said, "being nerdy wasn't quite so hip."

Even Yankovic's recent album "Straight Out of Lynwood" rides the nerd wave to success. The video for "White and Nerdy" has been viewed online over 100 million times.

Nerds are focused and probably obsessed about a few things, Yankovic said. "Their field of vision is narrowed, that's part of the description of a nerd, I think, but it's that kind of laser focus and attention to detail and passion that also makes them very successful in their chosen field."

"I think when Billy finally does walk into whatever he wants to do, he'll be able to settle down and focus a bit more."

What does Yankovic mean by focus? How about weeks-long debates as to whether one of the sentences in "When I Grow Up" needed a semicolon, a dash or a period?

This was the first time Yankovic has ever worked with an editor, Anne Hoppe from Harper Collins. For someone who has enjoyed the unhindered control of an artist, it turned out to be a positive experience.

"Anne was a great partner in this," he said. "I would write her four lines of verse and she'd write me back four pages of notes."

"We finessed this text for a very long time and I'm very happy with the way it turned out. It was just really great to have somebody that I could have those kinds of dialogues with."

Likewise, Yankovic is happy with the presentation of his ideas by illustrator Wes Hargis. The whimsy Hargis brings to the collaboration is something Yankovic feels is just right.

Yankovic confesses he's been bitten by the children's book bug. "Regardless of how this book does, and of course I hope it does very well, but I would like to write at least a few more. It was really a wonderful experience and I'd love to do it again."

What could be better news for longtime Weird Al fans who want to make their favorite satirist a family affair?