Inside the mind of a sports fanatic 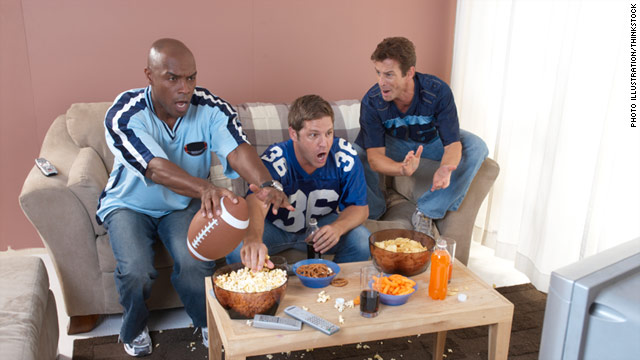 (Oprah.com) -- Whether you're a die-hard fan, a football widow or largely oblivious to the game, there's no escaping the Super Bowl.

Last year alone 106 million viewers watched on TV, bets were estimated to total as much as $85 million and a victory parade of approximately 800,000 attendees backed up traffic to New Orleans for 30 miles.

All this hysteria prompts one question: What is it about chasing a ball around a field that makes human beings care so much?

Scientists say it's all in our heads.

"A sporting event offers an opportunity to experience a compelling mix of chemical responses," explains Sandra Bond Chapman, Ph. D., founder and chief director of the Center for BrainHealth at the University of Texas at football-obsessed Dallas.

Researchers speculate that the act of gathering with a community of fans may activate the bonding hormone oxytocin.

Oprah.com: Girlfriend, are you ready for some football?

In the event of a win, the hypothalamus may chip in, too, with a feel-good dose of dopamine.

"Evidence suggests that dopamine cells respond to a reward primarily when it occurs unpredictably, which is typical with sporting events," Chapman says. "And because our brains want to repeat feelings of pleasure and euphoria, one win may produce a greater desire for the next."

Studies have connected fandom with additional effects, such as higher self-esteem (in basketball fans following a win) and fewer bouts of depression (in fans who strongly identify with their teams).

Research has also shown that after a victory, male enthusiasts experience elevated levels of testosterone, which is linked to behaviors including competitiveness and aggression. (While some researchers speculate that men connect more strongly to sports than women because -- in addition to having higher testosterone levels -- they're socialized to see games as emotional outlets, others cite a lack of specific research and are reluctant to generalize.)

Oprah.com: How one NFL player beat the odds

In certain circumstances, all the excitement can get a fan into trouble, points out Robert A. Kloner, M.D., Ph. D., director of research at the Heart Institute of Good Samaritan Hospital in Los Angeles. "An intense game can trigger a fight-or-flight response, making your blood pressure climb and your heart pump more vigorously, increasing its need for oxygen," he says.

His team explored these risks in a 2009 study -- and found that for both men and women, the rate of cardiac deaths in Los Angeles increased following the city's Super Bowl defeat in 1980. The findings echoed an earlier study in the European Heart Journal, which linked World Cup eliminations to a rise in cardiac events for the losing country.

Still, Kloner concedes that people will always love their sports. He remembers the case of a hockey fan who suffered a ruptured aortic aneurysm during a decisive game. "The guy collapsed and was rushed into emergency surgery," he says. "When he woke up, his first words were: 'Who won?'"