You know you're an extreme parent if ... 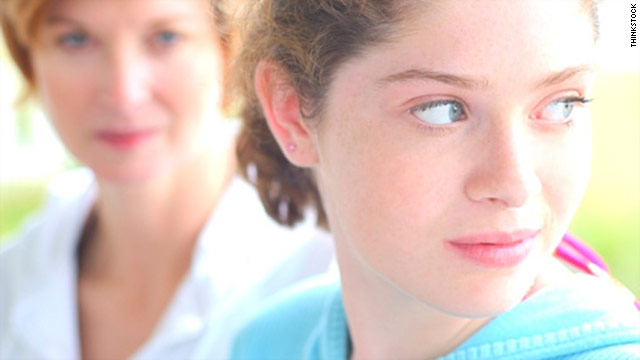 Editor's note: Are you an extreme parent? How do you know? Watch the special report "Extreme Parenting" on CNN Newsroom from 9 a.m. to 5 p.m. ET Thursday and Friday.

Atlanta, Georgia (CNN) -- "You know you're an extreme parent if your child, who does not have a documented learning disability, has more than three tutors."

"You know you're an extreme parent if you imagine that your child is going to play professional sports even though no coach has predicted this outcome."

"You know you're an extreme parent if you have your child take 30 practice SAT exams before the actual test."

"You know you're an extreme parent if the school decides to suspend your seventh-grader for doing something wrong and you show up at the school with a notebook full of laminated pages that contain every gold star, every sticker and every congratulatory comment any teacher ever made about your child in elementary school and claim that your child cannot possibly be suspended because he has always been 'so good.' "

Those real-life examples come from Michael Thompson, a psychologist who has seen extreme parenting on the front lines for many years -- and who has been called in by hyper-achievement schools all over America to guide parents on how to tone it down.

Thompson is the author of many books on parenting, including co-writing "Raising Cain: Protecting the Emotional Life of Boys."

Thompson is sensitive to all of us caring parents who want the best for our children -- who want to give them every possible advantage in life.

But he warns many parents overestimate their roles in a child's development -- which can lead to extreme behavior and a skewed sense of how are children are doing.

He recalls a mother who challenged her son's high school guidance counselor after he suggested several colleges based on the student's academics.

When she expressed her disappointment, the guidance counselor explained, "Your son is not in the top half of the class."

The mother's response: "Yes, but nobody told me he was in the bottom half."

Extreme parenting is driven by the parent who believes "they are the engine of how their children will turn out," Thompson says.

The trouble comes when parents cross the line from healthy involvement to trying to pave a straight line to success.

And it's not always a bright line.

About 10 years ago, Psychology Today columnist Hara Estroff Marano began investigating a dramatic rise in depression on college campuses. She spoke to about 400 people on the front lines of college counseling.

Why is this happening? she asked them all. And in almost every case she says she got the same answer: "These kids have no coping skills. They'd been overprotected by parents who were pushing them to achieve -- who were shielding them from bumps to have a straight shot at success."

That helps inform Marano's view of extreme parenting -- which involves parents who don't give their children enough latitude to experience failure.

"You know you're an extreme parent when you take over tasks for your kids," Marano says.

You solve their math problems for them. You ask them to do something, like tie their shoes, and get impatient, so you end up tying them.

More from the Marano files:

"You know you're an extreme parent when you make a trip to school to deliver a paper or homework that the child left at home."

In other words, children must experience the consequences of their mistakes. They must be given the opportunity to fail.

"You know you're an extreme parent when you plan your kids' college classes," Marano says.

You're pulling my leg, I said. No, she says. It happens.

"You know you're an extreme parent if you've ever told your kid that second best is not good enough," she adds.

Here's where Marano can get all of us parents passionate about giving our children the opportunity to develop the best inside them.

"It's critical that your children experience what it's like to muster your internal resources (and reach) for a goal you're not sure you can reach," Marano says.

"When the goal is in sight, (sprint) to it," she says. "That's when maximum happiness is generated in the brain. It's that last final sprint (that's key) ... when you're not 100 percent sure you're going to make it."

Ayelet Waldman, a Harvard Law School grad and former criminal defense attorney, is a mother of four and author of, among other books, a parenting memoir called "Bad Mother," which she says she hopes can help take the guilt out of not being the perfect mother.

Being an extreme parent, she says, has something to do with the belief that you are solely responsible for your child's success or failure.

That's the mistake she believes has been made by Amy Chua, author of the new book "Battle Hymn of the Tiger Mother," whose ultra-strict parenting techniques have triggered such a ferocious reaction.

"You know you're an extreme parent when you convince yourself that what your child achieves or fails to achieve is solely the result of what you've done or failed to do," Waldman says.

When you think you have that much control, she says, it can lead to extreme parental behavior.

"One mother wrote me, is it really OK to have her 6-month-old crawl two miles a day," says Temple University psychology professor Kathy Hirsh-Pasek. "She found that after a mile her child was getting tired."

Here's another one from the Hirsh-Pasek files: "You know you're an extreme parent when you're convinced your second-grade son is having more fun doing the Kumon advanced math program than watching Saturday morning cartoons."

And here's that theme again that ties it all together -- the one we heard over and over again as we surveyed child psychologists and development experts: You know you're an extreme parent when you believe your kid is turning out the way he is solely because of you -- that you are the master.

In development terms, Hirsh-Pasek frames it as two competing views of children:

1) A child is an empty vessel to be micromanaged by you.

2) A child is a discoverer, an explorer, and you are his or her guide.

So we now have plenty of examples of "You know you're an extreme parent if . ..." Hirsh-Pasek has provided the next challenge for parents: "You know you are a great guide to your child if. ... "