The Coble family's tragedy and miracle 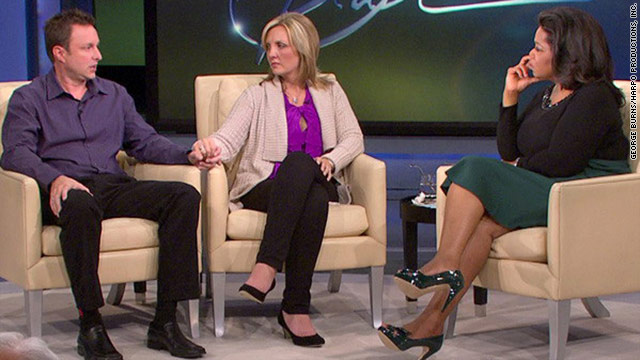 (Oprah.com) -- On the day after her son Kyle's 5th birthday, Lori Coble loaded up her minivan with her small children -- Kyle, 4-year-old Emma and 2-year-old Katie -- and her mom, Cindy. The family went to a mall that had a Ferris wheel, which Kyle was excited to ride, and a pet store.

As nap time neared, the Cobles got back in the minivan and headed home. Lori hit a line of backed-up traffic as she tried to exit the highway. While stopped, she turned around and caught Katie starting to fall asleep and tickled her toes.

Just then, a big rig loaded with 40,000 pounds of cargo going 55 miles per hour slammed into the back of Lori's minivan and demolished it. Lori was knocked unconscious, and the children were severely injured. The trauma was so bad, emergency medical officials had to split the family up. They sent Cindy and Lori to one hospital, Kyle and Katie to another, and Emma to a third.

Chris Coble, Lori's husband and the father of the children, was at work when authorities notified him of the accident. He rushed to the hospital where Lori and Cindy had been taken. When he arrived, he was brought to a small room near the ER.

"The doctor told me, 'I'm sorry, but Katie has expired.' A few more minutes went by, and they told me there was a call from the doctor from Saddleback Hospital. I got on the phone, and the first thing I said was, 'Please tell me Emma's alive.' And he said, 'I'm sorry, but Emma has expired,'" Chris says. "I just dropped the phone. I just couldn't believe that it was happening."

Chris told Lori that the girls had both died, and then rushed to the hospital where Kyle had been admitted. Though Kyle's opened eyes gave Chris hope, doctors told him the truth. Kyle's brain had not been receiving any oxygen. They recommended taking Kyle off life support.

Lori was transported to Kyle's hospital so she and Chris could say goodbye to Kyle together. "She's climbing out of the wheelchair the best she can to hug Kyle and saying: 'He's got to go be with his sisters now. His sisters are waiting for him,'" Chris says. "We stopped life support, and the machines went dark and the room went dark. I held my hand on his chest until his heart stopped beating. And he was gone."

Lori and Chris say the tragedy became real for them when they had to plan Kyle, Emma and Katie's funeral and burial. "The day before the funeral, we did a viewing. We got to go see the kids one last time," Lori says. "They opened the doors, and in the back of the room [there were] just three little caskets in a semicircle."

At the funeral service, Lori and Chris gathered enough strength to speak about their children's lives. "It was important to me and Lori to do that," Chris says. "One of the underlying theories of grief is facing the hard things. In this situation, you just can't sit back and let it consume you. You have to look in the face of the guilt and walk through the pain."

Lori and Chris say their grief progressed at different schedules. "She was about two weeks ahead of me," Chris says. "I almost used her as a barometer to know where I would be in two weeks in the grief process."

While the stages of grief don't necessarily follow in strict order -- denial, anger, bargaining, depression and acceptance -- Chris says his did mirror Lori's. "I moved out of denial into anger and grief one morning, and it was so obvious to me that I was there," he says. "Lori had already been there for a couple weeks and I was seeing what she was going through, and suddenly I'm feeling that way."

As they worked through their grief, Lori and Chris made a pact with each other to not commit suicide -- to stay alive for each other. "To some degree, you want to be with [the children] and end this constant feeling of grief. You could easily consider taking your own life because maybe it will be better in the sense that you'll see them again," Chris says. "But at the same time, you're leaving the other person."

"We promised not to leave each other alone," Lori says.

Where they once had a boisterous, happy home, Chris and Lori now found deafening silence and loneliness. "We have tons of kids on our street, and kids are always playing in the street," Lori says. "We'd close our windows. We'd go in the back of the house so we didn't have to hear the laughter. We went away on Halloween just so we didn't have to hear the kids coming and knocking at the door."

Oprah.com: What we can't explain at the end of life

Lori's mother, Cindy, says she was extremely worried about her daughter and son-in-law in the wake of their children's death. "One day I went over to their house because she wasn't answering the phone and I started to think, 'Maybe they're going to hurt themselves,' because I knew how much pain I was in losing my grandchildren," Cindy says.

Chris and Lori weren't home when Cindy stopped by, and their car was gone. "Of course, then my mind goes to somewhere else. 'What could they be doing in the car?' And then Lori called." She and Chris had been out together, but Cindy says she was already hysterical by the time she talked to her daughter, who had to calm her down. "I was supposed to be comforting her, and now they were comforting me. But I was so afraid for them."

Cindy has two sons, both older than Lori, and she says she voiced to them her fears about what Chris and Lori might do. "[My sons] were also in contact all the time, and [we all] tried to support them as best we could," she says.

Three months after the accident, Chris and Lori decided to try to have more children. "We always described ourselves at that point as 'parents without children,'" Chris says. "I mean, when you have three children that young, your whole lives are dedicated to them and you love it."

For medical reasons, the Cobles tried in vitro fertilization. On their first try, they started with 10 eggs. Three were successfully fertilized -- two girls and a boy. "We were only going to put two back in, but once we found out that it was two girls and a boy, we took that as a sign from above," Lori says.

While Ashley, Ellie and Jake's birth is a miracle, Lori and Chris still grieve their lost children. "They'll never replace Kyle, Emma and Katie," Lori says. "But the joy is back in the house. It's back in our hearts. They fill our lives again with love and happiness and laughter."

The triplets already know about their siblings because there are still pictures on the walls and Lori and Chris often talk about them. "They know that they have two sisters and a brother in heaven," Lori says. "And we go to the cemetery and we have picnics."

Oprah.com: How to comfort a friend in mourning

Jorge Romero, the man driving the truck that slammed into Lori's minivan, was convicted on three counts of vehicular manslaughter and was sentenced to a year in jail. He is a father of three who told the judge that he was suicidal. Lori and Chris met Romero at the trial and say they gave him their forgiveness.

"Mr. Romero was actually a very kind-hearted, gentle person," Chris says. "Just by telling this story you might jump to vilify somebody right away, but there is someone behind the wheel, and while they shared some of the blame in this tragedy, he just felt absolutely horrible."

Lori says it could have been anyone behind the wheel of that car, and that the accident was caused primarily by her car's location in a bad traffic jam. "I was stuck in traffic on a freeway waiting to exit and I was about half a mile back on the freeway, basically in a parking lot. There's a blind curve coming up to that exit, and I was so far back in that blind curve that he didn't see me. By the time he saw traffic, it was too late."

Chris says the roadway where the accident took place has been a problem area for about a decade. The Cobles sued the California Department of Transportation for wrongful death, claiming that it was a dangerous highway exit. They lost that case and then were ordered to pay $291,000 in legal fees, but say they want to appeal.

"As soon as most people hear the word 'lawsuit' they thing we're out to somehow get money from this experience," Chris says. "We want [the California Department of Transportation] to change their procedures, for how they keep our roads safe."

Chris urges people going through the worst days of their lives to not give up the fight to go on, even when things seem unbearable. "For me, [grief] was like a bucket was filling up, and every once in a while the bucket had to dump," he says. "The bucket dumping is you falling apart and being a complete mess for some period of time. And then trying to pick yourself back up."

For Lori, finding support from loved ones is the only way to live through grief. "Hold onto your loved ones," she says. "Hold on tight, because you're really going to need them."

Oprah.com: The secret to finding miracles where you least expect them