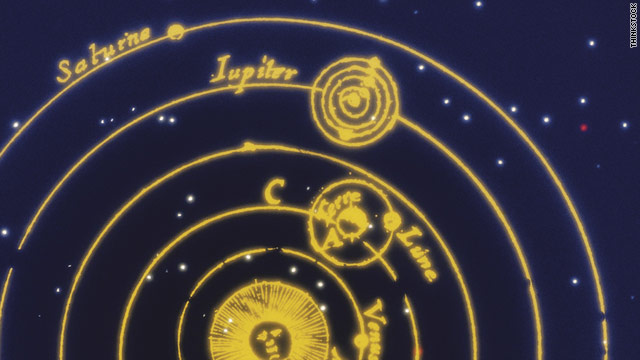 News of a so-called shift in zodiac signs has some people worried about what it means for their identity.
STORY HIGHLIGHTS
RELATED TOPICS

(CNN) -- The e-mail messages began filling astrologer Shelley Ackerman's inbox as soon as the Minneapolis Star Tribune reported the zodiac chart is off by about a month.

OMG I'm not a Leo help me with that

My daughter and her friends are very upset. Have they changed signs?

I'm not worried I KNOW I'm a true Scorp

Darling, what does this mean in our world? I couldn't be a Pisces

Ackerman, a New Yorker who has offered astrology services for more than two decades, says this is the first time she has seen such a strong reaction among her clients.

"Our identities are precious," she said. "If someone challenges our belief system, it's very threatening. You want to hold on to the fact 'at least I'm a Libra.' "

After news of the shifting zodiac signs went viral, some people may be rethinking their lucky lotto numbers or reassessing their spouse's compatibility.

A quarter of Americans believe the moon and the stars can affect a person's life, according to a Gallup poll. But so-called "new" news of the planets moving, and thereby shifting the zodiac signs, has been around for centuries, astrology experts say.

"This story is born periodically as if someone has discovered some truth. It's not news," said Jeff Jawer, an astrologer with Tarot.com, told CNN's This Just In news blog.

The news sparked the creation of Facebook groups such as "I Don't Want to Change My Zodiac Sign Ever" and "CHANGE BACK THE ZODIAC SIGN!!!" On Twitter, users fretted about what to do with their zodiac-themed tattoos. Even online greeting cards have popped up with the message: I'm sorry your new astrological sign has rendered your tattoo meaningless.

"Everyone can relax," Young said. She added: "People ask me what does it mean for their personality. I expect it will be the same it was yesterday. You probably didn't wake up with a new personality."

Westerners are most familiar with sun signs, which became popular in the late 1800s when newspapers added horoscopes to attract readers, astrologers say. But sun signs alone are not considered reliable tools of prediction. Most astrologers say accurate readings require information such as time of birth, birth place and date of birth.

The biggest concern from Young's customers this week was the 13th sign, Ophiuchus, which was mentioned in the Star Tribune piece. The constellation is symbolized by a man wrestling a serpent. People were worried because so little is known about this 13th sign, she said.

Joseph O. Baker, assistant professor of sociology at East Tennessee State University, has studied why people become interested in their horoscopes and paranormal activity. He says people believe in astrology because it helps relieve uncertainty.

So will people stop believing in the "old" zodiac system?

"You can think of this as a disconfirmation of what we previously thought was true," he said. "If that happens and you have a lot invested in a particular belief system, it's unlikely to drop that belief system completely."