From lawyer to comedian? Making a midlife career change 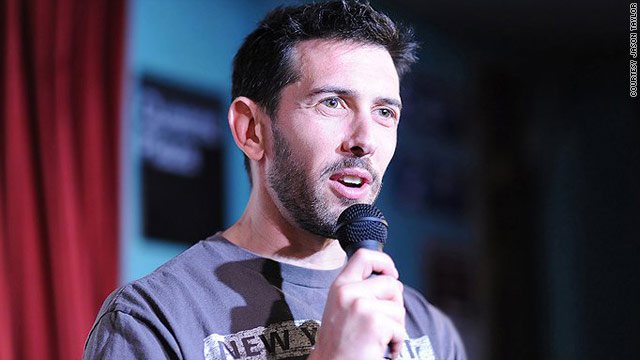 Alex Barnett, 43, was laid off from a law firm in 2008. Instead of returning to law, he started performing comedy.
STORY HIGHLIGHTS

(CNN) -- In a fantasy world, you quit your job and pursue your passion.

Instead of selling houses, you lead food tours. Rather than poring over legal documents, you make people laugh by performing stand-up comedy. Or you bid goodbye three decades of business consulting and get creative, perhaps by designing your own jewelry line.

For millions of Americans, these career leaps may sound too risky or unrealistic, but many people are changing jobs frequently. The average person born between 1957 and 1964 held 11 jobs from age 18 to age 44, the U.S. Bureau of Labor Statistics reported. The bureau doesn't track the number of people who shift careers because the term is too difficult to define.

Rick Domeier, author of "Can I Get a Do Over?," a book profiling people who have successfully changed careers, says finding a new career may sound difficult but is doable with some planning.

"Let's say you're in a job, and you aren't sure how long it will last," he said. "You should be asking: What can I do to invest in my skills so in 10 years, I might be ready to pursue my dreams?"

Leaving one career for another may happen out of necessity for some people, with companies continuing to downsize. As of December, the unemployment rate remained steady at 9.4%, according to the Bureau of Labor Statistics.

But some career shifters were bolder. They faced an "ah-ha" moment and just went for it.

Lisa Scalia loves traveling and food. She fused her two interests together in the summer of 2008 when she launched Melting Pot Food Tours in Southern California.

Her company takes people on walking tours in Los Angeles and Pasadena, where they can graze at local eateries. The customers savor culinary delights from places like Peru and China while learning about the history of the neighborhoods.

Scalia had worked as a real estate appraiser for more than 20 years. Then, three years ago, she was at lunch with a friend, casually wondering whether they should reinvent themselves. Scalia decided to make her dream happen.

She put together the business plan quickly, taking less than a year to start the tours. 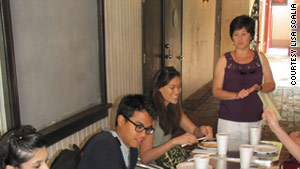 Lisa Scalia, 49, left her job in the real estate industry to open a food tour company.

Her work changed from researching and preparing reports on the housing market to delving into the travel and tourism industry. Scalia learned to be nimble, taking on tasks such as accounting, marketing and tour development.

"The learning curve has been steep," she said. "I basically do whatever needs to be done."

Leaving her comfortable real estate job came with sacrifices. Scalia, who is the breadwinner of her family, watched her annual pay plummet from more than $100,000 a year to about $30,000 a year.

Before her career change, Scalia would take as much as three months off to go on trips to Australia. Now, she and her husband no longer have the flexibility to take long vacations because her company requires so much attention.

Despite the drawbacks, she says it has been worth it. She enjoys having complete control of her company and meeting new people on her tours. So far, people from at least from 70 countries have joined her tours.

"Chances are if I have this really great idea, and if I didn't do it," she said, "someone was going to do it."

From attorney to comedian: Alex Barnett, 43, of New York City

Alex Barnett grew up hearing about legal issues because his father was an attorney.

He graduated from St. John's University School of Law and became an attorney, too. He dabbled in nonprofit law and then focused on class-action litigation.

But law was never his passion, Barnett said, and in his spare time, he channeled his creativity into writing short stories and taking acting and comedy classes.

When he was laid off from a small Washington, D.C., law firm in 2008, he started performing at comedy clubs for the money.

He even turned down a steady government job offer. "I realized if I didn't love it, and there were too many question marks around it, then I needed to turn it down," he said.

The biggest difference between law and comedy is that comedy has fewer rules and regulations, Barnett said. He found the field of comedy challenging at first because there was less structure.

His life has changed in other ways since he took the freelance route. He works almost every weekend -- the prime time for comedy club performances. His paycheck has shrunk since his lawyer days, which means he and his girlfriend have cut down on expenses and eat out less often.

He no longer receives the luxuries of a company-sponsored 401(k) plan or health insurance, and he pays for his benefits out of pocket.

A drastic career change may sound difficult, and the first few years usually are the toughest. But Barnett has some advice for people considering it: "You only have one life, so do what you want to do with it."

Today, she creates high-end fashion jewelry that can be seen on New York socialites and network TV news anchors.

Tobin opened a small jewelry boutique called "Patty Tobin" in New York City's Chelsea neighborhood in 2009. The store, which features bright jewelry crafted from gemstones and pearls, has been so successful, she is opening a second one in the next year.

"I was nervous knowing what I was up against," Tobin said. "Branding a business in a good economy is challenging, and a bad economy is worse. As a consultant, I knew all of it." 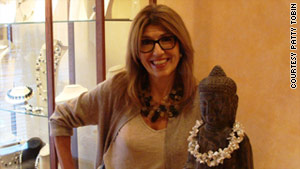 Tobin was her late 50s when she decided to leave her consulting career. She had never designed jewelry before, never had formal training. She just enjoyed fashion growing up.

She said support from family and friends was critical, but she did encounter people who doubted that her business plan would work.

"I had some people saying it's going to be over before it starts," Tobin said.

She funded most of her business herself, but relatives and friends chipped in as well. She said the economic slump brought some positive aspects to starting her small business; Tobin was able to negotiate a better rate with landlords and vendors.

But she doesn't advise everyone to jump into a major career change, especially if they are not financially secure. She said she planned her career switch for about five years.

"Know there will be defeats and challenges along the way," she said. "But if you're passionate, it will give you the strength to forge ahead."