How is wind chill calculated? 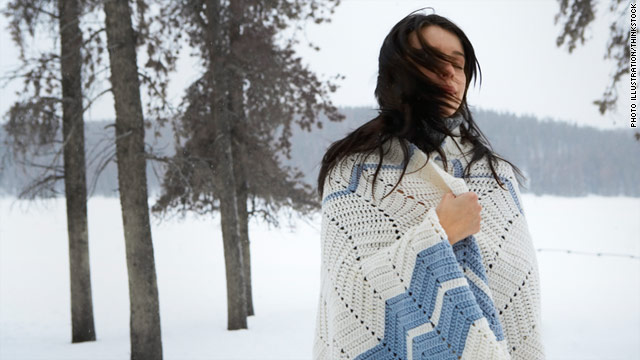 The lowest wind chill ever recorded was minus-150 degrees in Antarctica, when the wind was blowing 75 miles per hour.
STORY HIGHLIGHTS
RELATED TOPICS

(Mental Floss) -- What does it really mean when my weatherman says that it feels like minus-20 in Chicago? Is there a wind chill thermometer somewhere, or is he just using a mathematical formula?

Let's answer these and some of the other pressing questions about the ubiquitous winter statistic.

1. Why does wind make us feel cold?

When the wind blows across the exposed surface of our skin, it draws heat away from our bodies. When the wind picks up speed, it draws more heat away, so if your skin is exposed to the wind, your body will cool more quickly than it would have on a still day.

2. Who came up with the idea of calculating wind chills?

American explorer and geographer Paul Siple and his fellow explorer Charles Passel made the first breakthroughs in wind chill research while on an expedition in the Antarctic in 1940.

Siple and Passel suspended bottles of water outside a hut at their base station and measured how long it took the water to freeze under various wind conditions. After taking hundreds of these readings, the pair had a good idea of how rapidly heat was lost at different wind speeds.

3. What exactly is a wind chill temperature?

When Siple and Passel did their research, they weren't really trying to develop a temperature equivalent that alarmist weathermen could trot out. In fact, their original measure expressed the heat loss in a more esoteric unit: watts per square meter.

The idea of expressing wind chills in terms of an equivalent temperature -- the "feels like" language we hear on the news -- didn't start until the 1970s. Before the switch, weathermen would report the wind chill in three- or four-digit numbers which were a bit difficult for viewers to wrap their heads around. American weathermen started translating wind chills into temperature equivalents in order to give viewers a more familiar term.

4. If the air temperature is 40 degrees but the wind chill is 28 degrees, will water freeze?

Nope. Although high winds can make those of us with a pulse feel more miserable than normal, they don't have the same effect on inanimate objects.

Lower wind chills mean that inanimate objects cool to the air temperature more quickly, but even high winds can't force the object's temperature below the air temperature. That means that in the above example even though your skin might think it's 28 degrees, your water pipes will still be a balmy 40 degrees.

5. So is there an actual formula for wind chill?

You bet. Just in case you ever find yourself with a calculator, thermometer, and anemometer but without access to The Weather Channel, the Fahrenheit version of the equation looks like this:

T is the air temperature in degrees Fahrenheit, and V is the wind speed in miles per hour.

6. Wait, shouldn't how cold the wind makes you feel depend on all sorts of variables like your body type, and whether you're walking into the wind?

Those things certainly affect how quickly the wind cools a person's skin. The above formula makes some simplifying assumptions to get its numbers.

Basically, the wind chill factor you hear reported assumes that your exposed face is roughly five feet off the ground, it's night, and you're walking directly into the wind in an open field at a clip of about 3 mph.

7. Are those conditions really all that realistic?

If you're in a profession that involves a lot of night-field-walking, sure. Otherwise, maybe not. Critics of wind chill reports note that lots of factors can mitigate the reported wind chill. Your weatherman may tell you that it feels like 50 below outside, but if you're dressed warmly, standing in the sun, or in an area with cover like buildings and trees that block the wind, you will feel significantly warmer.

Mental Floss: What exactly is curling?

8. So if the formula is arguably somewhat dubious, can we just disregard wind chill reports as frivolous statistics?

Not so fast. While the methodology concerning wind chill calculations is still being debated in some quarters, that doesn't mean that the measurements are altogether useless. Remember, the basic concept behind wind chill is that stronger winds will cause exposed skin to cool more quickly.

The faster skin cools, the faster frostbite can set it. As wind chills drop south of -50 or so, the onset of frostbite can take as little as five minutes, so it's worth keeping an eye on the wind chill even if the notion of your skin "feeling like" a certain temperature may be a bit misleading.

9. Has the formula always been the same?

This overstatement may sound innocuous, but the weather services worried that it would lull citizens into a false sense of security if it led people to believe they could withstand colder temperatures than they realistically could.

Since the collaborating weather services knew that the old wind chill formula was broken -- "feels like -50" actually felt much warmer than standing around on a windless 50-below day -- they recruited a group of volunteers to walk on treadmills in a refrigerated wind tunnel. Using sensors on the subjects' skin, scientists calculated a more accurate formula.

With all of the tweaks in the formula over the years, it's tough to say definitively, but how's this for chilly: on July 4, 2003, a remote weather station in east Antarctica picked up a minus-94 degree day. That would be plenty frigid on its own, but the wind was also blowing at 75 miles per hour, which would be good for a wind chill of about minus-150.