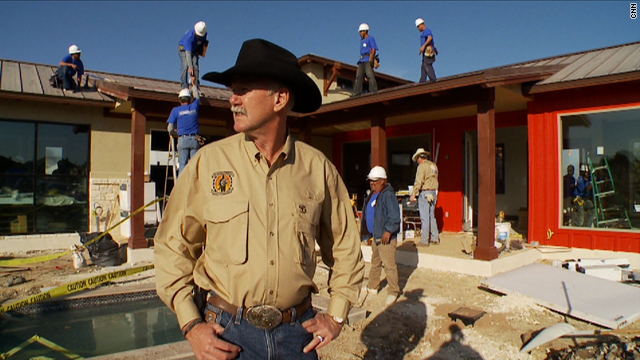 Salado, Texas (CNN) -- Dan Wallrath spent 30 years as a homebuilder in Texas, but it wasn't until 2005 that he found his life's work.

After helping renovate the home of a young Marine who had been severely wounded in Iraq, Wallrath realized there were thousands of other injured war veterans who needed a hand. So he decided to help them by doing what he knew best -- building homes -- and giving them away, mortgage-free.

For his efforts, Wallrath was recognized in November as one of the year's top 10 CNN Heroes. The exposure has helped take his organization -- now known as Operation Finally Home -- to the next level.

"It's just been incredible," Wallrath said last month. "We've been getting phone calls and e-mails and donations from all over the world."

Since the airing of "CNN Heroes: An All-Star Tribute," Operation Finally Home has received more than $100,000 in contributions -- as well as three pieces of property that will be used for future homes. All told, being honored as a CNN Hero has enabled Wallrath to more than double his impact. So far, his group has completed nine homes, and it has 13 more planned or under construction.

The spotlight also led "Extreme Makeover: Home Edition" to partner with Wallrath on a special project last month: building a home for one of the victims of the 2009 shooting spree at Fort Hood, Texas.

"We had seen Dan on the CNN Heroes tribute, and we thought, 'That's a perfect guy we've got to team up with,' " said George Verschoor, executive producer of the ABC television show.

Watch a clip from the "Makeover" episode

The home was for Army Staff Sgt. Patrick Zeigler and his fiancée, Jessica Hansen. Zeigler, 29, had just returned from his second tour of duty in Iraq when he was shot four times at Fort Hood, including once in the head. Although doctors had given him only a 5% chance to live -- at one point, Hansen started writing his eulogy -- Zeigler not only survived but learned to walk again.

Wallrath said the couple's story and spirit is typical of the families that his group tries to help.

"All of a sudden, their life has been turned upside down. And in spite of their injuries, they're moving forward," Wallrath said. "This is what our program's about. We give (families) a hand up, not a handout. ... They just need a little help in life to get them started."

Usually about 200 people are involved in building a home for Wallrath's group, but more than 4,000 volunteers chipped in to help "Extreme Makeover" build Zeigler and Hansen's home in Salado, Texas. Salado is about 30 minutes away from Fort Hood.

"We have tons of military folks coming out and helping us," Wallrath said. "That's one of the reasons this job has gone so well."

For Zeigler and Hansen, the home means stability and a fresh start.

"It's really exciting to know that so much love and care went into this house," Hansen said. "I think every time we look around, we'll always feel that."

In mid-December, at an event honoring Zeigler and Hansen, Wallrath announced that Operation Finally Home had established a Fort Hood Victims' Fund to help all of the families affected by the attack. The fund will assist with emergency financial needs and home renovations like wheelchair ramps and handicap-accessible bathrooms.

"Now we know that all these families are not going to be forgotten," Wallrath said. "America's going to step up, and we're going to be able to help them."

The "Extreme Makeover" episode featuring Wallrath will air February 20, but people can already donate to the fund on Wallrath's website.

All in all, it was a breakthrough year for Wallrath and his work. And he's excited about having the chance to help even more people in 2011.

"You know, sometimes I feel selfish because I feel so good all the time about seeing these lives changed," he said. "Now, we're going to be able to change a lot more."