Cursive vs. typing: Which should schools teach? 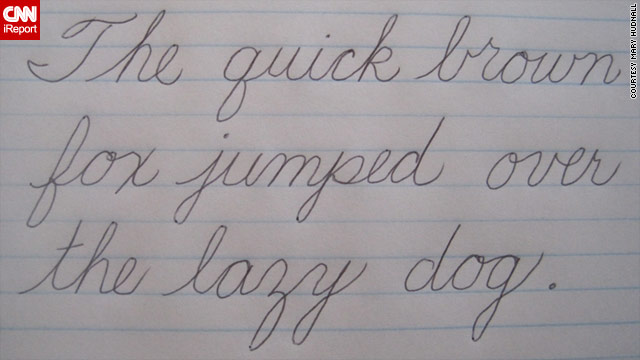 (CNN) -- "Will a simple handwritten note look like hieroglyphics to the next generation?"

So wrote second-grade teacher Anthony McGrann on his Seattle-based education blog, Seconds. The post, which argued that cursive handwriting should continue to be taught in schools, garnered more than 500 comments. It's a touchy subject: Is there a reason schools should continue to teach cursive, and is it worth the time that must be spent?

Forty out of 50 states in the United States have adopted the Common Core curriculum, which phases out cursive writing in the classroom, for their public schools. According to its mission statement, Common Core seeks to teach skills that are "robust and relevant to the real world, reflecting the knowledge and skills that our young people need for success in college and careers." In Common Core, the time formerly devoted to teaching cursive is spent on learning to type and other digital skills.

"With technology being what students need to learn in order to participate in a global world and economy, I'm not sure schools can forfeit the time to teach cursive, unfortunately," said Paige French, an eighth-grade history teacher in Dallas, Texas.

It's also a matter of students not needing to use cursive as much as they had in the past. On CNN iReport, we asked people to share samples of their handwriting. Of the 268 submissions we'd received at the time of this article, 149 (55%) were printed, 75 were in cursive, and 44 were a hybrid of the two. Many of the cursive submissions came from adults who said they'd switched to cursive in high school or college because it was faster for taking notes. But for students these days, it's often faster and neater to take notes on a laptop or similar device, making the speed of cursive far less important.

The waning focus on handwriting comes as a welcome change to some who disliked handwriting lessons as students or felt they were a waste of time.

"I didn't particularly like (learning cursive) at the time, and honestly, I'm still wondering when all that practice will actually produce something," says Kelsie McWilliams, a student in Castle Rock, Colorado.

But educators like McGrann feel cursive is more than a traditional style of writing. They believe it has intrinsic value for learning and self-expression.

"For struggling writers, cursive allows them to be more fluent and thus lets their ideas flow on the page more readily ... some students have more ideas in their heads than they can (print) on paper," says McGrann. "If you integrate penmanship with other literacy activities, the formation of letters really does make a difference in the way kids retain information."

"The discipline of cursive is excellent for developing fine motor skills, especially in young children," agrees Mary Brennan, who has her own handwriting business in New York. "It's part art training, part everyday work skill."

There is some scientific evidence that they're right. A Wall Street Journal article from last year cites studies from Indiana University and the Journal of Cognitive Neuroscience, which suggested that writing by hand increases brain activity and memory of concepts.

Besides the intrinsic value of cursive writing, some are worried that phasing it out may make texts written in cursive go the way of hieroglyphics, as McGrann pointed out.

"I rarely use it now. Still, it should be taught so that students are able to read it -- think historical documents," says Danici Conlon of Victorville, California.

And McGrann, whose private school has no plans to stop teaching cursive, says it doesn't take much extra time to teach if teachers plan well.

Still, with 80% of states in the country phasing out cursive and so much of today's communication being digital, the discussion may be purely academic.

Kristi Peck teaches English and theater at a Tipton, Iowa, high school. She was taught cursive as a child, but finds herself printing more and more -- mostly because of her students.

"Many students can't comfortably read cursive," she says. "As a teacher, I don't have the luxury of messy writing if I want my lessons and notes clear and accessible."

Peck doesn't see the point of teaching cursive to a new generation when so many people no longer use it.

"Today, a person's handwriting is seen much less often than in the past. I think the time taken to teach cursive should be used to teach more relevant skills and knowledge," she says.

Although many, like Vivica Sparks of Grayson, Kentucky, point out one relevant skill:

"Yes, cursive should be taught in school," she said. "How else would a person learn how to sign a signature?"