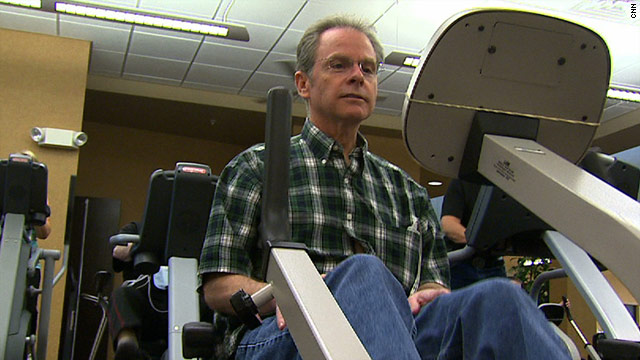 (CNN) -- If you're not overweight, eat pretty well and exercise now and then, you might think you're in good heart health. But doctors say you don't have to look like a heart attack waiting to happen to be one.

Tom Bare, 54, is a case in point. The high school science teacher was thin, active and ate well, but still needed open-heart surgery this spring to bypass blocked coronary arteries.

Bare received a telltale warning sign this spring when he went for a jog outside his Lincoln, Nebraska, home.

"Made it about three tenths of a mile and then had the classic symptoms. Chest pain ... and then pain down the left arm and shortness of breath," Bare said. That's what prompted him to see his doctor. Within days, he was scheduled for surgery.

"He's at risk for heart attack just because of the amount of plaque that he has," said surgeon Ed Raines just before performing a quintuple bypass on Bare.

Bare has a strong family history of heart disease: His mother's parents both died of heart attacks, and his mother and brother both required heart surgery, he said.

Still, he was trying to do everything right. He was on a statin medicine, which he said had lowered his cholesterol from just under 300 to 125. Total cholesterol of 240 or above is considered a risk factor for heart disease.

Also, Bare's typical diet was better than most: oatmeal for breakfast, fruit for lunch, chicken or Mexican food for dinner.

He didn't smoke. He was not overweight or diabetic.

Dr. Dean Ornish, who has researched the relationship between lifestyle and health, says even the most malignant family history can be overcome.

"I don't think anyone is doomed to have heart disease," said Ornish, founder and president of the Preventive Medicine Research Institute.

"You know, even if your mother and your father and your sister and your brother all die from heart disease it doesn't mean you need ever to die from it," he added. "It just means you need to make bigger changes in your life than someone else who doesn't have those kinds of genes."

Bare was worried enough about his heart health that he underwent a coronary calcium scan four years ago. The test showed plaque building up in his coronary arteries.

"My score was 111," Bare said. Zero is the best score. Five is the average score for someone his age. A score over 100 meant an elevated risk of heart attack. He had another coronary calcium scan this year. His score was up to 243.

A survey by the American Heart Association suggests many are misguided about their heart health. Some 39% of Americans think their heart health is ideal. The actual number is less than 1%, said Nancy Brown, CEO of the heart association.

Will you have a heart attack? Tests that can tell

Bare has returned to school part-time until he regains his strength and he's hoping bypass surgery has given him a new lease on life. The science teacher says he'd like to travel, maybe see a volcano erupt.

"I'm told that I'm good for another 40 years or so, and I'm hoping that's the case, but with my history, I'm going to have to watch it," Bare said.

Even so, Bare said he has no plans to give up the food he loves.