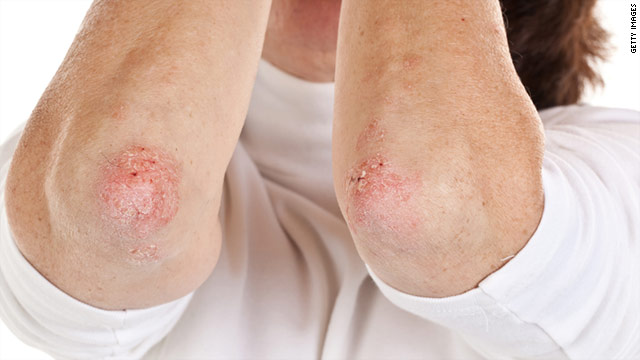 (Health.com) -- For people with severe cases of psoriasis, the injectable drugs known as biologics can provide much-needed relief from the itchy, flaky skin lesions caused by the disorder.

These drugs are powerful, however, and they carry a small risk of potentially serious infections and other side effects.

In addition, recent clinical trials have linked a newer subclass of biologics that includes the drugs ustekinumab (Stelara) and briakinumab to an increased risk of heart attack and stroke.

Now, a new study suggests that the heart risk associated with these drugs may be a nonissue.

An analysis of previous research published Tuesday in the Journal of the American Medical Association found no measurable evidence that Stelara or briakinumab harm the heart, although the researchers caution that more extensive studies will be needed to confirm this conclusion.

"We didn't show statistical significance, so there's no actual evidence these drugs cause cardiovascular events," says the lead author of the study, Caitriona Ryan, a psoriasis researcher at the Baylor Research Institute, in Dallas.

But Ryan adds that the findings don't conclusively prove the drugs pose no heart risk. The pool of patients was too small to draw firm conclusions, she explains, and even though psoriasis patients may take a biologic for years, none of the clinical trials lasted more than 12 weeks.

"Unfortunately, the way clinical trials are designed at the moment, they're powered for efficacy, [not] safety," Ryan says. "To be able to show there's an increase in heart attack or strokes, you're going to have to look at lots, lots more patients."

Health.com: Are you at risk for psoriatic arthritis?

The Food and Drug Administration approved Stelara for psoriasis patients in 2009, but briakinumab is not yet available. The drug's manufacturer, Abbott Laboratories, withdrew its application for FDA approval earlier this year, after the agency asked for more information about the drug.

The new analysis was funded entirely by the Baylor Research Institute, a center affiliated with Baylor University that conducts clinical trials and other research, sometimes in collaboration with the medical industry.

Ryan has received research grants from Abbott, and several of her coauthors report financial relationships with Abbott, Janssen Biologics (the maker of Stelara), and other pharmaceutical companies. (Janssen was formerly known as Centocor.)

Health.com: Your guide to biologics for psoriasis

In the new study, Ryan and her colleagues reanalyzed data from 22 clinical trials that compared Stelara, briakinumab, or an older class of biologics (known as the TNF inhibitors) with placebo. The analysis covered 10,183 patients. Ten of the 3,179 people taking Stelara or briakinumab had a heart attack or stroke or died of heart-related causes during the studies, compared with none of the 1,474 patients on placebo.

Christopher Griffiths, M.D., a professor of dermatology at the University of Manchester, in the UK, says he prescribes Stelara to his patients who aren't helped by TNF inhibitors, even if they have heart disease.

It's important for doctors to closely monitor the heart health of patients taking Stelara or any biologic, says Griffiths, who has served as a consultant to Centocor and Abbott, among other companies. But, he adds, this should be standard procedure in anyone with psoriasis, since previous studies have turned up an association between severe psoriasis and heart disease. Experts believe inflammation may contribute to both conditions.

"There is no doubt that there's a link between having severe psoriasis, which makes you eligible for biological therapies, and increased risk of having cardiovascular disease, so that has to be factored in here," Griffiths says.

Joel M. Gelfand, M.D., an assistant professor of dermatology at the University of Pennsylvania's Perelman School of Medicine, in Philadelphia, says the analysis underscores the "importance of doing large, long-term randomized studies of psoriasis therapies," since psoriasis is a "lifetime disease."

Like Griffiths, Gelfand has had financial relationships with drug companies including Abbott and Centocor. Gelfand says he doesn't hesitate to prescribe Stelara to his patients with severe cases of psoriasis, but only after they first try TNF inhibitors or methotrexate, psoriasis drugs that have been used for a decade -- or several decades, in the case of methotrexate -- and have established safety profiles.

Ustekinumab appears to have a "very low risk" of serious side effects, Gelfand says, but it will require more study. "We still have to get more information to fully understand its safety profile," he says.

The FDA, which has reviewed the clinical trials in Ryan's analysis as part of the drug approval process, does not require Stelara or any other approved biologic to carry a warning about cardiovascular risk.

Psoriasis is thought to be a type of autoimmune disorder. Faulty immune cells cause skin cells to overproduce, which in turn causes the disorder's characteristic lesions. Biologics, including Stelara and briakinumab, work by blocking the action of certain immune cells.