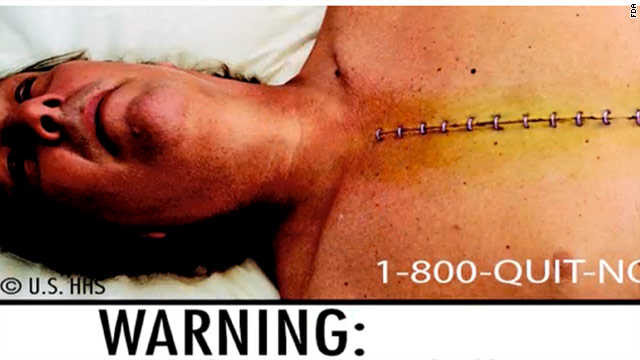 (CNN) -- Five tobacco companies, including some of the largest in the United States, filed a lawsuit against the federal government on Tuesday, alleging that government-mandated graphic warning labels on cigarette packages unconstitutionally infringe on the companies' rights.

"The primary complaint is that we think it violates the First Amendment for the government to require people who produce a lawful product to essentially urge prospective purchasers not to buy it," says Floyd Abrams, a prominent First Amendment case expert who's representing the plaintiffs.

The lawsuit, filed in the U.S. District Court for the District of Columbia, pits R.J. Reynolds, Lorillard, Commonwealth, Liggett, and Santa Fe Natural Tobacco against the Food and Drug Administration, its chief, Margaret Hamburg, and Health and Human Services Secretary Kathleen Sebelius.

In June, the FDA unveiled nine new warning labels, complete with graphic photos and the phone number 1-800-QUIT-NOW. FDA regulations say that starting in September, 2012, half of each cigarette package will have to display one of those new labels.

Abrams says the tobacco companies don't have a problem with the written wording required by the latest FDA ruling.

"The government has lot of power to require warnings, but it doesn't require half of a cigarette pack to scream out, 'Don't buy this product!," the New York-based attorney says. "What is at issue is putting photographs of diseased people on every cigarette pack, include a phone number, and ask people to stop smoking. It's the direct advocacy to not buy the product, as opposed to a straightforward warning."

Abrams says it's likely his clients will seek some sort of preliminary injunction against the warning labels before the statute goes into effect next year.

"[We're] seeking resolution prior to that, in light of all the funds that would need to be expended changing current warnings to the level of screaming at prospective purchasers not to buy the product," Abrams says.

An FDA spokeswoman said in a statement that the agency "does not comment on proposed, pending or ongoing litigation."

Tobacco use is the leading cause of premature and preventable death in the United States, and it claims almost half a million lives each year, according to the FDA website.

The more prominent cigarette health warnings are the first time those warnings have been revised in 25 years and "are a significant advancement in communicating the dangers of smoking... expected to have a significant public health impact by decreasing the number of smokers, resulting in lives saved, increased life expectancy, and lower medical costs," the FDA website says.