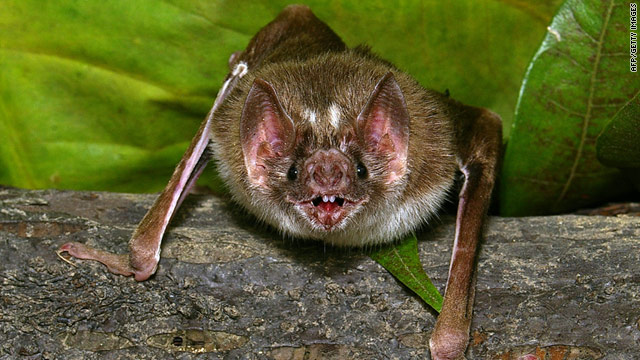 During the past decade, vampire bats have become the leading cause of human rabies in Latin America.
STORY HIGHLIGHTS

The incident occurred a year ago, when the Centers for Disease Control and Prevention confirmed a case of rabies in a 19-year-old migrant worker who was hospitalized in Louisiana with inflammation of the brain, the agency said in its Morbidity and Mortality Weekly Report.

The man had developed neurologic symptoms at the end of July 2010, shortly after arriving in the United States from Mexico. After a day of work on a sugarcane plantation in Louisiana, he sought medical care for fatigue, left shoulder pain, and left hand numbness -- symptoms that were initially blamed on exertion. But his symptoms continued and he was sent to a hospital in New Orleans.

There, an examination revealed hypersensitivity of the left shoulder, weakness of the left hand, underactive reflexes, and drooping of the left eyelid.

Doctors suspected Guillain-Barré syndrome, a syndrome in which the body's immune system attacks the nerves, or meningitis, an inflammation of the membranes covering the brain.

Over the next few days, as the patient's condition deteriorated, doctors began to suspect -- based on the worsening symptoms -- that he had rabies.

On August 20, that diagnosis was confirmed by testing. The patient died the next day.

Postmortem tests revealed he had been infected with a vampire bat rabies virus, the CDC said.

Rabies virus causes progressive brain inflammation that is almost always fatal if treatment is not begun before the onset of symptoms.

Bat rabies virus has been associated with most indigenously acquired human rabies cases in the United States for some 20 years. During the past decade, vampire bats have become the leading cause of human rabies in Latin America.

The CDC urged doctors caring for patients with acute progressive inflammation of the brain to consider rabies as a possible cause, and to recognize that recent travel to a country with rabies could be a risk factor.

Since 2000, eight of the 32 human rabies cases reported in the United States were acquired from exposures abroad -- two of them from Mexico.

Though vampire bats are found only in Latin America, their range may be expanding into the United States due to climate change, the report said.

Bats have been implicated in the transmission of a number of infectious diseases.