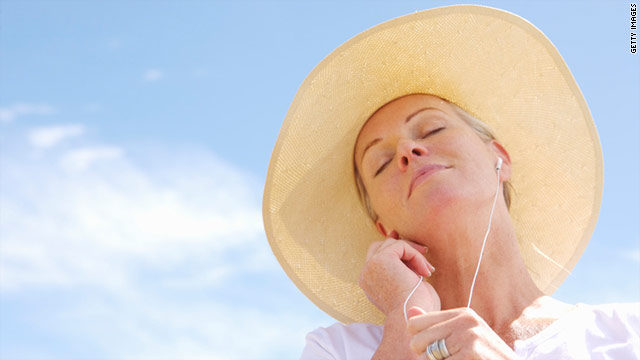 A researcher says singing or playing music can be "empowering" for patients who feel victimized by cancer.
STORY HIGHLIGHTS
RELATED TOPICS

(Health.com) -- Singing, playing an instrument or even just listening to music may lessen anxiety in cancer patients and improve their overall quality of life, according to a new analysis of previously published research.

Music-based therapies appear to also have beneficial effects on pain levels, mood, and certain vital signs (such as blood pressure), the study found, suggesting that music may be a useful complement to medication and other standard treatments.

"I strongly believe that the beauty of music can bring renewed hope for patients and their loved ones and can energize them," says lead researcher Joke Bradt, Ph.D., an associate professor of creative arts therapies at Drexel University, in Philadelphia, Pennsylvania.

Singing or playing music can also be "empowering" for patients who feel victimized by cancer, Bradt adds.

For years, researchers have studied music-based therapies as a treatment for a wide range of chronic, painful, and emotionally distressing diseases, including cancer.

To see what broad conclusions might be drawn from this research, Bradt and her colleagues systematically reviewed 30 studies that included 1,891 adults and children with cancer. The results were published today in the Cochrane Library.

In 17 of the studies, the people listened to prerecorded music. The participants in the remaining studies took part in various guided music therapies, which in some cases included singing, playing the piano or creating rhythms alongside a therapist. (All of the studies included a control group that received standard cancer treatment.)

Overall, both the sessions with music therapists and the prerecorded music reduced patients' anxiety levels and improved quality of life (as measured using questionnaires) better than the standard treatments. In some studies, music therapy also improved pain and mood (though not depression levels), as well as blood pressure, heart rate, and respiratory rate.

Bradt says there isn't enough evidence to determine what type of music intervention was most effective. She believes, however, that therapies involving music are likely to be most successful when they are tailored for people according to their musical tastes and their ability to participate in music-making.

In the studies that used prerecorded music, for instance, most people were given a choice between several different genres (new age, classical, rock, country). What works for one person, Bradt says, may depend on his or her taste and background.

"It's not like when you go to a doctor with a headache, and he prescribes a specific type of medicine that will help me with my headache and also help you with your headache," she says.

Robert Zatorre, Ph.D., a cognitive neuroscientist at McGill University, in Montreal, who studies the effect of music on the brain, says that musical qualities like tempo and volume will also likely impact a patient's mood and stress levels.

"It's been known for a very long time that music can influence mood," says Zatorre, who was not involved in the new review. "That's why lullabies exist -- to calm down babies who won't sleep."

Further studies will be needed to weigh the costs and benefits of implementing music therapy, both in cancer patients and in other populations, Bradt says. And because the outcomes measured in these studies are so subjective, additional research will be needed to confirm that factors besides the music aren't influencing the results.

"The cost involved with music is very small compared to other kinds of interventions," he says. "How well it works -- say, compared to drugs -- is another question, but the side effects are very minimal as well. The worst thing that can happen [when] someone doesn't like music is that they can turn it off."