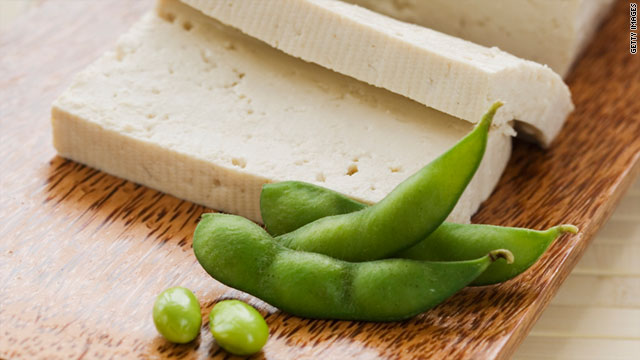 To prevent bone loss, women should stick with the basics, such as getting enough calcium, vitamin D and exercising regularly.
STORY HIGHLIGHTS
RELATED TOPICS

(Health.com) -- Middle-aged women searching for a safe alternative to hormone therapy to prevent bone loss and ease the symptoms of menopause are in for another letdown.

The latest in a series of disappointing studies finds that soy supplements, an increasingly popular substitute for hormone therapy, do not stave off hot flashes, night sweats, and other uncomfortable menopausal symptoms.

Nor did the supplements reduce the aging-related bone loss that can lead to osteoporosis, the study found.

"Isoflavones, the plant-derived estrogens found in soy, are very weak estrogens, so it is not surprising that they have not shown to be as effective...as hormone therapy," says the lead author of the study, Silvina Levis, M.D., the director of the osteoporosis center at the University of Miami's Miller School of Medicine.

"Women taking soy isoflavone tablets to alleviate hot flashes and prevent bone loss at the time of menopause might want to reconsider," she adds.

During menopause a woman's body produces less estrogen and progesterone. Hormone therapy, which entails replacing one or both of these hormones via medications, significantly reduces menopausal symptoms and helps maintain bone health, but it can also increase the risk of blood clots, stroke, heart disease and breast cancer.

Soy protein, a fixture of Asian diets, has been considered a possible alternative to hormone therapy for years, ever since researchers observed that women in Asia tend to have lower rates of bone loss and osteoporosis than their counterparts in the West. However, clinical trials of soy in menopausal women have had mixed results.

In the new study, published this week in the "Archives of Internal Medicine," 248 menopausal women were randomly assigned to receive a placebo pill or 200 milligrams of soy isoflavone supplements per day -- a dose "equivalent to approximately twice the highest intake through food sources in typical Asian diets," Levis says.

At the end of the two-year study, bone scans showed no differences in bone mineral density between the two groups. (The amount of bone loss in the study was quite low overall, perhaps because most of the women were overweight, the researchers say; women are generally less susceptible to bone loss if they're overweight.)

So if soy isn't beneficial, what options are women left with?

To prevent bone loss, women should stick with the basics, Levis says. That means getting enough calcium and vitamin D, exercising regularly, and, in some cases, taking bone-strengthening drugs such as bisphosphonates.

As for hot flashes and night sweats, the anti-seizure drug gabapentin or certain antidepressants in the selective serotonin reuptake inhibitor (SSRI) class may help some women, says Deborah Grady, M.D., a professor of medicine at the University of California, San Francisco.

"There's evidence that some of the SSRIs work, but they don't seem to work as well as estrogen," says Grady, who cowrote an editorial accompanying the study. "That leaves us with estrogen. It's too bad, but that is the answer."