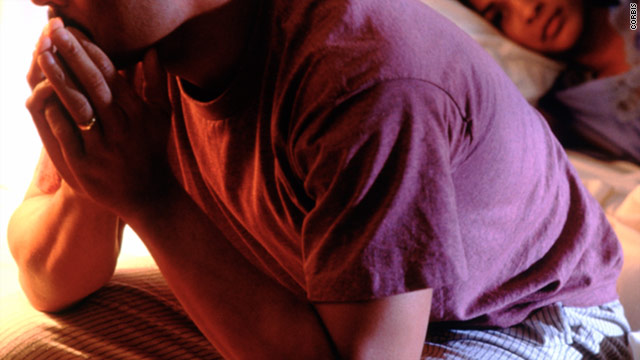 (Health.com) -- Viagra gets the job done, but it's a quick fix. For many men, weaning themselves off the little blue pill and finding a longer-lasting solution to their sexual dysfunction may require hitting the gym and putting down the doughnuts.

A new Australian study, published Friday in the "Journal of Sexual Medicine," found that losing just 5% to 10% of body weight over a two-month period improved the erectile function -- and revved up the sex drives -- of obese men with diabetes.

The study was very small (it included just 31 men), so the results should be taken with a grain of salt. But the findings are yet another reminder that obesity and erectile dysfunction (ED) often go hand in hand.

Excess weight -- especially excess belly fat -- can affect sexual function in many ways; it can interfere with the body's ability to supply blood to the penis, for instance, and it can cause testosterone production to plummet.

And though the research on weight loss and sexual dysfunction is still emerging, there's growing evidence that men who get active, eat healthier foods, and pare a few pounds will see their sex lives improve -- not to mention their overall health.

In fact, doctors express hope that the promise of an improved sex life will finally get through to all the overweight and obese men who haven't responded to dire warnings about heart disease, diabetes and stroke.

Health.com: The worst habits for your heart

"You talk all the prevention you want," says Kevin Billups, M.D., an associate professor of urology at the University of Minnesota, in Minneapolis. "When I talk about restoring penile health, I have their attention."

When a patient comes to see him about ED, one of the first things Billups tells him to do is to stand up and look at his belly. "If you can't see your penis," he says, "that's a problem."

How obesity hits below the belt

The most important way that excess weight drags down a man's sex life is by affecting the health of his blood vessels.

An erection occurs when the blood vessels leading to the penis dilate, causing it to fill with blood. This process begins when the inner lining of the vessels (known as the endothelium) releases nitric oxide, a molecule that signals the surrounding muscles to relax. (Viagra and similar drugs work by increasing the amount of nitric oxide in the endothelium.)

Health.com: 10 reasons why you're not having sex

Although experts aren't exactly sure why, obesity appears to damage the endothelium. And when the endothelium doesn't work properly, the penis may not get enough blood to produce or sustain an erection.

"An erection is basically a cardiovascular event," says Robert A. Kloner, M.D., a cardiologist and professor of medicine at the University of Southern California's Keck School of Medicine, in Los Angeles. "If blood flow cannot increase because the blood vessels can't dilate normally, then there's a decrease in erectile function."

Sure enough, in the new study, endothelial function improved in the men who lost weight. (Function was measured using two different laboratory tests.)

Poor heart health can cause ED in another way. The fatty foods and lack of exercise that cause weight gain also contribute to the narrowing and hardening of arteries (atherosclerosis), in which cholesterol and other substances build up in the artery wall.

Atherosclerosis, which can lead to heart attacks if it occurs in major arteries near the heart, can happen just as easily in the small blood vessels leading to the penis.

In fact, atherosclerosis may hit those small blood vessels first, which is why ED is increasingly seen as an early warning sign of heart disease, Kloner says.

The role of testosterone

Blood vessel problems are responsible for the vast majority of ED cases in obese men over 40, experts say, but another common culprit is low testosterone, which is also linked to obesity. Adequate levels of this male sex hormone are necessary to maintain sex drive and get erections.

Low testosterone is "very much underdiagnosed," says Ronald Tamler, M.D., co-director of the men's health program at the Mount Sinai Medical Center, in New York. "And as we are all getting fatter, it's becoming an increasing problem."

Health.com: Make over your sex drive

Those big bellies Billups warns his patients about are especially worrisome when it comes to testosterone. Belly fat, a strong predictor of heart risk, seems to have a greater effect on the hormone than excess fat distributed in other parts of the body.

"That's the bad actor that causes all sorts of inflammatory mediators and different substances to be emitted into the body that will lower testosterone," says Billups, who studies the relationship between heart health and sexual dysfunction.

Losing even a little weight can improve blood vessel function (as the new study shows), but the effect of weight loss on testosterone levels may not be as rapid or as direct. Men who have persistently low testosterone levels and ED despite losing weight may need to consider testosterone gels, shots or patches, Tamler says.

Health.com: Should "male menopause" be treated with testosterone?

Weight loss can turn things around

Being overweight doesn't seem to affect a man's self-esteem as much as it does a woman's, says Joel Block, Ph.D., a psychologist on Long Island who specializes in couples therapy and sex therapy. ED, on the other hand, can trigger a cycle of shame and doubt in even the most confident men.

"Once [ED] happens it becomes self-perpetuating," says Block, an assistant clinical professor at the Albert Einstein College of Medicine, in New York City. "The more he fails, the more difficulty he has."

Eventually, Block says, a man will begin to avoid sex. And his condition may plunge him into depression.

"Even if you have clear cut medical reasons -- diabetes, obesity -- when you're having erectile dysfunction...it is depressing," Billups says. "A lot of these men [are] down in the dumps."

Losing weight can help with the plumbing aspect of ED, but it can also provide an ego boost that carries over into the bedroom, says Stephen Josephson, Ph.D., a psychologist at New York-Presbyterian Hospital.

"People need to feel good about themselves [to] overcome performance anxiety and other things in the sex arena, and sometimes it's as simple as getting into shape," Josephson says.

Some men who have relied on pills like Viagra or Cialis to get erections can toss them once they start exercising, eating right and losing weight, Billups says.

These men may see their morning erections return, he adds, and their wives have been known to say they're acting "friskier."

"They'll come in and tell me, 'Wow, doc, things are really turned around,'" he says.