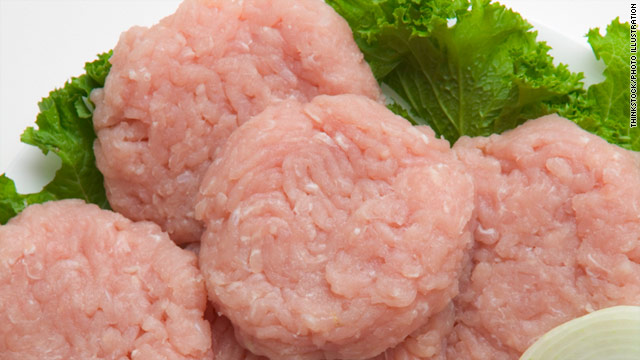 Twenty-two of the 78 people diagnosed with salmonella as a result of the outbreak have been hospitalized, said Dr. Chris Braden, a top official at the Centers for Disease Control and Prevention.

One person has died due to the outbreak, which has been detected in 26 states.

Braden urged consumers Thursday to check the packaging on any ground turkey products they may have purchased recently, and to use extra caution in handling such products.

"We've identified the 36 million pounds that need to be recalled," Agriculture Secretary Tom Vilsack told reporters at the Wisconsin State Fair in suburban Milwaukee. "Hopefully, that will provide some greater level of certainty and surety to consumers. We've gotten information out about precisely what those products are, the expiration dates, the specific brand names. I'm thankful that we're finally able to figure out precisely where the problems might be."

"I'd say it's one of the larger recalls," said Joel Brandenberger, president of the Washington-based National Turkey Federation. Indeed, the weight of the product recalled is equivalent to the weight of more than 36 fully-loaded Boeing 747 commercial airplanes.

Cargill's plant in Springdale processed the suspect fresh and frozen ground turkey products between February 20 and August 2, the company said in a news release.

The company said it has suspended production of ground turkey products at the processing facility until it can determine the exact source of the bacteria strain.

"It is regrettable that people may have become ill from eating one of our ground turkey products and, for anyone who did, we are truly sorry," said Steve Willardsen, president of Cargill's turkey processing business. "We go to great lengths to ensure the food we produce is safe and we fully understand that people expect to be able to consume safe food, each serving, every time."

Consumers may return any opened or unopened packages of ground turkey items listed on Cargill's website (www.cargill.com/turkey-recall/) to stores where they were bought for a refund.

About 5 billion pounds of ready-to-cook turkey meat are sold in the United States each year, Brandenberger said. That's nearly double what it was 40 years ago, he said.

It works out to 17 to 18 pounds of turkey per person per year, of which about 10% is ground, he said. The recalled meat represents slightly more than 6% of the national production of ground turkey in a given year, he said.

Each year, about 260 million turkeys are raised in the United States. Brandenberger predicted the recall will have little impact on turkey consumption. "The fact that the government and everybody involved worked through this issue pretty quickly to resolve it will maintain consumer confidence in ground turkey," he said.

On Friday, the U.S. Department of Agriculture's Food Safety and Inspection Service released a public health alert for frozen or fresh ground turkey products that underscored the importance of following cooking instructions and general food safety practices when preparing any raw meat or poultry.

It recommends meat be cooked to 165 degrees Fahrenheit (74 Celsius).

Infection with the bacteria can cause people to develop diarrhea, fever and abdominal cramps 12 to 72 hours after infection.

The sickness usually lasts four to seven days, and most people recover without treatment.

But severe diarrhea can require hospitalization and, if the infection spreads from the intestines to the bloodstream and then elsewhere in the body, the bacteria can prove fatal, according to public health experts.

The aged, infants and people with impaired immune systems tend to be at highest risk.