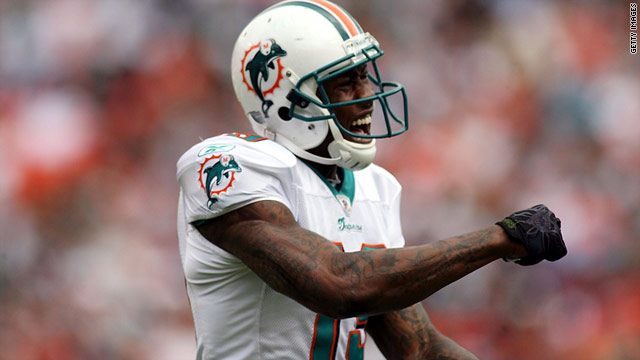 Brandon Marshall received his diagnosis this spring, after seeking treatment at a hospital in Massachusetts.
STORY HIGHLIGHTS

(Health.com) -- Miami Dolphins wide receiver Brandon Marshall is known as much for his headline-grabbing troubles off the field as he is for his standout play on it.

If he has his way, he's about to be famous for something else entirely.

In a news conference on Sunday, Marshall told reporters that he suffers from borderline personality disorder, or BPD, a mental illness marked by intense anger, impulsivity, and turbulent interpersonal relationships.

The 27-year-old wide receiver -- who received his diagnosis this spring, after seeking treatment at McLean Hospital, in Belmont, Massachusetts -- told reporters he wants to be the "face" of BPD.

"My purpose moving forward is to raise awareness of this disorder -- how it not only affects the patient but the families and the people in the community," he said.

Health.com: What are the symptoms of BPD?

Marshall certainly has his work cut out for him. Although an estimated 2% of U.S. adults are affected by the disorder, it remains poorly understood, even among mental health professionals. That's partly because the symptoms of BPD can look a lot like those of other mental illnesses, such as bipolar disorder, depression, and schizophrenia.

(The term "borderline," in fact, arose because psychiatrists originally conceived of BPD as occupying the border between psychosis and neurosis, two broad categories of mental illness that aren't as widely used today.)

BPD can be especially difficult to identify and diagnose because some of the disorder's hallmarks -- including mood swings and intense fears of abandonment -- are, in less severe forms, considered to be "normal" human emotions and behavior, says Chris Cargile, M.D., a psychiatrist at the Texas A&M Health Science Center College of Medicine, in Bryan.

"Most of the things we talk about in personality disorders we see in everybody," says Cargile, who has not treated Marshall and cannot comment on the specifics of his case. "The reason we have the word 'disorder' is when those things become problematic. It's when the intensity level rises to the point where you can't hold a relationship together for more than a few hours or days, because you can't trust anybody."

BPD often manifests in "severe eruptions of depression," distrust of other people that verges on paranoia, and "frantic" efforts to avoid abandonment, Cargile says.

Suicidal threats and attempts are common; the completed suicide rate in people with BPD is as high as 10%, according to a review of the disorder, published in May in the New England Journal of Medicine, that coincidentally was written by John Gunderson, M.D., a psychiatrist at McLean Hospital who has spoken with Marshall about his condition.

Health.com: Signs someone is at risk of suicide

Underlying much of this volatile behavior are an unstable self-image and a pattern of "black-and-white" thinking, Gunderson writes, which can lead to sudden, dramatic switches between feelings of "idealization" and "devaluation" regarding others.

During his press conference, Marshall alluded to the fact that his illness may have played a role in some of his high-profile off-the-field problems, including, most notably, a domestic dispute in April in which Marshall's wife, Michi Nogami-Marshall, was arrested and charged with stabbing Marshall with a kitchen knife.

(On Sunday, Marshall defended his wife and denied press reports about the incident without providing specifics.)

BPD usually has its roots in early childhood abuse, abandonment, and neglect, and it manifests in poor coping techniques. People with BPD "just don't know how to deal with their feelings," says Junquera, who has not treated Marshall.

Men and women with BPD often deal with strong emotions in different ways, she adds. Men represent about one-quarter of all people with BPD, and their inability to manage their feelings sometimes manifests as violence and drug and alcohol abuse.

Women, on the other hand, tend to turn their feelings on themselves, cutting themselves repeatedly or threatening to kill themselves if they believe someone's going to leave them, she says.

Health.com: Myths and facts about suicide and depression

BPD can be disruptive and difficult to treat. Although up to 85% of people with the disorder achieve remission within 10 years of their diagnosis, only about 25% manage to remain employed full-time, according to Gunderson's review.

Unlike schizophrenia, bipolar disorder, and depression, BPD (and many other personality disorders) tend not to respond to medications, although doctors do sometimes prescribe antidepressants, atypical antipsychotic drugs, and mood stabilizers to BPD patients. Instead, experts tend to rely on talk therapy that stresses how to cope with the feelings of abandonment and other symptoms of the disorder.

"You can treat some symptoms with medications, but the way to truly improve...functioning is with psychotherapy," Cargile says.

Marshall said he underwent both individual and group therapy at McLean, and seems optimistic about his own prognosis.

"I am not saying that I am cured," Marshall told reporters during the news conference. "What I am saying today is that I am confident today that with the skills that I have learned and the intensity of the program that I went through that I am in a position where I can live an effective and healthy life."