Alcohol and anxiety a risky mix for some 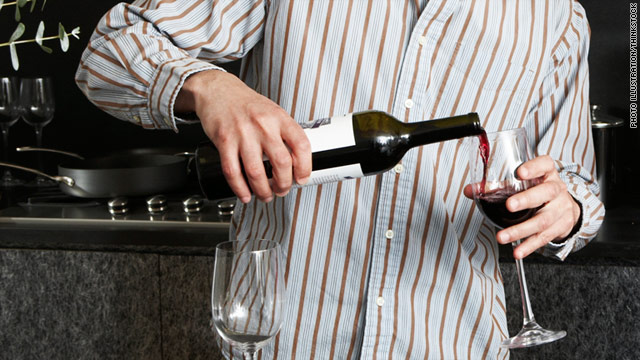 In the study, 13% of the people who had consumed alcohol or drugs in the previous year said they'd done so to reduce anxiety.
STORY HIGHLIGHTS
RELATED TOPICS

(Health.com) -- Many people who experience chronic feelings of anxiety about social situations, work and relationships, or other aspects of everyday life often reach for a beer or a glass of wine to quell their unease.

Alcohol may help anxious people cope in the short term, but over time this strategy can backfire. According to a new study in the Archives of General Psychiatry, self-medicating with alcohol or drugs can increase the risk of alcoholism and other substance-abuse problems, without addressing the underlying anxiety.

"People probably believe that self-medication works," says James M. Bolton, M.D., the lead author of the study and an assistant professor of psychiatry and psychology at the University of Manitoba, in Winnipeg. "What people do not realize is that this quick-fix method actually makes things worse in the long term."

Health.com: How to relieve the acute discomfort of anxiety disorders

Self-medication for anxiety symptoms is common. In the study, which included a nationally representative sample of 34,653 American adults, 13% of the people who had consumed alcohol or drugs in the previous year said they'd done so to reduce their anxiety, fear, or panic about a situation.

An even greater proportion, roughly one-quarter, said they had similarly self-medicated with drugs. (Detailed data on the drug use was not available, but Bolton says most people were probably using prescription sedatives -- such as Xanax -- without a prescription, rather than using marijuana or illegal drugs.)

Health.com: The science of getting sloshed: how alcohol affects you

In addition, people with anxiety symptoms but in whom a full-blown anxiety disorder had never been officially diagnosed were more likely to receive a diagnosis of social phobia by the end of the study if they self-medicated. Social phobia, also known as social anxiety disorder, is characterized by pronounced fear or anxiety about specific situations, such as parties or speaking in public.

"Serious consequences can develop very quickly," Bolton says. "People can develop alcoholism and anxiety disorders within just three years, and these are illnesses that can have a devastating impact on a person's health, their relationships, and their financial situation."

Experts have long known that people with anxiety disorders are vulnerable to substance abuse, and vice versa, but they haven't been able to determine whether one problem precedes the other.

The new findings are significant because they are among the first to examine the relationship of anxiety symptoms and substance use in a group of people over time, says Kristen Anderson, Ph.D., a clinical psychologist and assistant professor of psychology at Reed College, in Portland, Oregon. Anderson was not involved in the new study.

Health.com: Is alcohol good for you? What's right and wrong with drinking

Bolton and his colleagues reanalyzed data from a nationwide survey, led by the National Institute on Alcohol Abuse and Alcoholism, that began in 2001.

Having a glass of wine to ease the tension of a stressful day doesn't necessarily put a person at risk for becoming an alcoholic, of course. Substance abuse is heavily influenced by a person's genes and environment, Anderson says, but she adds that habitually relying on alcohol or drugs to ease anxiety at the expense of healthier coping strategies -- such as working out, talking with a friend, or taking a hot bath -- can be risky.

"I think all of us, whether we're disordered or not, need to consider the reason why we choose to use alcohol or other drugs," Anderson says. "When any of us decide to try to cope with external agents, I think it's a very slippery slope."

The shame some people feel about their anxiety and a reluctance to seek help for psychological problems are likely major factors contributing to self-medication, Bolton says.

"Unfortunately, people often do not seek the help they need because of the stigma around mental illness," he says. "People are likely to stay at home and use the resources that they have at their disposal, which in this case would be alcohol or drugs."

Maureen Carrigan, Ph.D., a professor of psychology at the University of South Carolina-Aiken who studies addictive behaviors and anxiety disorders but wasn't involved with the new research, sees widespread self-medication as a symptom of our "quick-fix society."

Talk therapy and other treatments for anxiety are effective and can even solve the problem for good, Carrigan says, but they can be time-consuming and aren't always covered by insurance. People experiencing anxiety may not even be aware of these treatments, she adds.

"The average person doesn't always know that there are good psychological treatments that exist for some of these problems," she says.