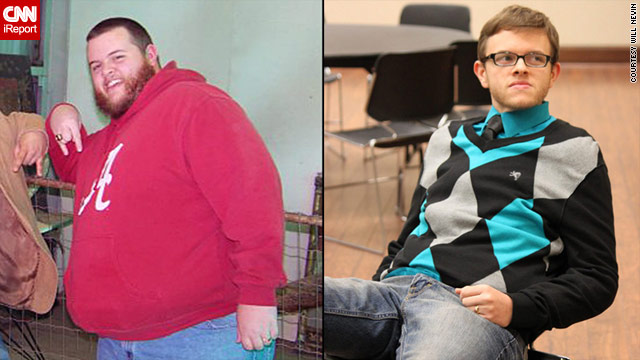 Will Nevin, 25, shed 175 pounds during 11 months, willing to do anything, except face his anxiety about visiting the doctor.
STORY HIGHLIGHTS
RELATED TOPICS

(CNN) -- Will Nevin had been dreading the doctor for years.

Nevin knew he was obese, maybe even a likely target for diabetes. At 5 feet 10, Nevin estimates he weighed 350 pounds.

An Internet search added to the 25-year-old's suspicions. He had symptoms such as a tingling in his feet, which he thought was probably a symptom of pre-diabetes at the very least. But it was easier to ignore his size than face the possibility of a complicated diagnosis.

For Nevin, the ultimate evidence of his denial came on a road trip from Alabama to California in January 2010 with a few friends. At the wheel, Nevin abruptly began to feel a tightening in his chest, and his heart started racing.

"What is this? Am I having a heart attack?" he thought, assuming the worst.

Now, Nevin believes he was foolish not to stop or alert his friends, but the feeling passed, the trip continued and he remained determined to not have his fears confirmed by a doctor. He hadn't seen one since April 2006.

When he returned to school in Alabama, Nevin kept mentally reliving his scare and wallowing in self-pity; shortly after coming back, he had lost his job, which had consumed all his time.

Now, his evenings consisted of eating and watching TV until bed.

After about a month, Nevin realized that something had to change. He's still not sure where the spark came from, but he headed to his university's gym.

The idea to go to the gym was strange, but Nevin says he wasn't scared, because he didn't know what he was getting into. The intimidating part came when he actually got to the gym -- even the layout was unfamiliar, with the exception of the smoothie counter.

Despite his misgivings, he hopped on the treadmill and walked for three miles that night.

Besides committing to the gym every single day, he did his own research and changed his diet to exclude red meat and fried food, but added in fruits and vegetables.

"I will be the first to admit I did not do this ideally," he said. "If I had to do it over again, I would have seen a doctor and a nutritionist from the start, at the very beginning. But it just happened to work out for me."

The gym sometimes proved to be a lonely experience as he dragged himself on the treadmill and observed the chiseled and ripped bodies surrounding him, knowing how unlikely it was that he could ever look like that.

"The toughest moments were when you stepped on the scale and you weren't satisfied for whatever reason," he said.

But eventually, his hard work paid off. People's comments of, "You look different," turned into, "I don't even recognize you anymore." There were small victories in tightening his belt to the next hole and getting rid of the 4-XL T-shirts.

For Nevin, one of the biggest benefits of exercising and losing weight was being able to walk up the flight of stairs to his law class and reach the top without feeling winded.

"I can run up a flight of stairs now, and it doesn't bother me," he said.

About 11 months later, in January 2011, Nevin sprinted across the finish line -- he had met his goal of 175 pounds, half his starting weight. He said there was a relief at finally seeing that number he had been imagining on the scale.

Foodie struggles every day to keep pounds off

Nevin also finally faced his doctor, confident that he could handle the truth.

"(The anxiety) went away as soon as the blood tests came back -- my sugars were fine, my blood pressure was fine," he said.

"I see it regularly, and certainly for that dramatic of a weight loss in somebody so young, I would be surprised if he didn't normalize," she said.

Got your own weight loss story to share? Visit iReport

However, Jampolis said that if a person is pre-diabetic, that genetic predisposition never goes away and will likely come back if the person regains weight. This is why it's crucial for the changes to turn into a lifestyle.

"Type 2 diabetes is clearly associated with being overweight and (is) responsive in most cases to weight loss," she said. "If you are concerned that you have symptoms of diabetes, you should absolutely see a doctor and not try to self-treat yourself. It worked out for him, but it might not work out for everybody."

The most difficult part of Nevin's journey was powering through the mental setbacks and persevering even when the scale wasn't showing him the results he wanted to see. He had been overweight since kindergarten, always opting for TV and computer games rather than the outdoors and athletics. 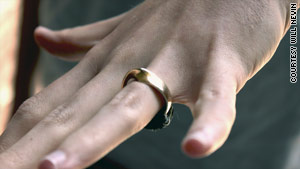 Will Nevin now uses duct tape to keep his wedding ring from falling off.

Now that he knows he's pursuing a healthy lifestyle, his constant nervousness has turned to peace. His calorie-conscious eating hasn't ruled out fast food, but while a typical order used to include at least three cheeseburgers and a large order of fries, now it's a low-fat chicken salad. He still uses the treadmill daily, but his speed and resistance levels have increased.

One unconventional reminder of Nevin's journey is his wedding band, which is too wide for his finger. To keep it from falling off, he wrapped layers of duct tape around the ring in what he describes as an "inelegant solution."

It's also what inspired the name of his blog, Duct Tape Wedding Ring, where he writes about his continuing journey.

"It's about finding the little solutions that work for you," he said. "(Even though) they might not be what other people would do. ... If I can change my entire life in 11 months, what can't I accomplish?"