My chronic cough turned out to be adult asthma

By Laura Finlayson as told to Sarah Klein, Health.com 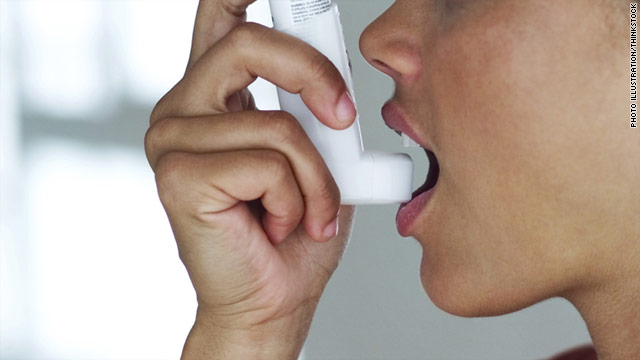 Some people can develop asthma as adults after having a bad lung infection.
STORY HIGHLIGHTS
RELATED TOPICS

(Health.com) -- Laura Finlayson, 40, from Westwood, New Jersey, just couldn't seem to shake her persistent cough. It lingered for months and was so violent that she ended up in the emergency room with bruised ribs.

Then she found out it was asthma, most likely triggered by a bout of pneumonia. She decided to take matters into her own hands. She started training to become a runner, lost 25 pounds, strengthened her lung function and now has her symptoms almost completely under control.

In August 2008, I developed a nasty case of pneumonia. I just couldn't seem to get better. Doctors gave me antibiotics and then even more antibiotics, but they couldn't get the symptoms under control.

Gov. Christie in the hospital

My coughing was so bad that people in my office were scared of me; one coworker even asked me if I had been checked for tuberculosis. Months passed, and in October I was still coughing as badly as I had in the summer.

It got so bad that I actually ended up in the emergency room because doctors thought I may have broken my ribs from coughing so hard. It turned out that my ribs were bruised.

By the beginning of November, I had seen a pulmonologist. He gave me a lung function test and told me my asthma was completely out of control. I was shocked.

My first reaction was, "But I don't have asthma!" The doctor said, "You do now!" He told me that some people can develop asthma after having a bad lung infection.

I had never heard of anyone developing asthma as an adult before, so the diagnosis came as a surprise. So did my first asthma attack. Kids who grew up with it know what it feels like, but for me it came out of nowhere. It felt like my chest was in a vise; the pressure on both sides felt like someone was crushing my chest.

My breathing was horrible when I was first diagnosed. I was wheezing so loudly at night, it would wake me up. I couldn't exert myself in any way without getting short of breath.

They treated me with so many steroids, I used to say they should make me an honorary Yankee. (That's just my joke, though; I know the inflammation-fighting drugs used to treat asthma are corticosteroids, a class of drug completely different from the anabolic steroids sometimes abused by athletes.)

After the corticosteroids helped improve my lung function, my doctor prescribed Symbicort, a kind of drug called a bronchodilator. It is taken in an inhaler and helps relax airway muscles. I now use it twice a day. I also take the allergy medicine Allegra-D in the morning to make sure I don't get congested during the day. If I get even a little bit congested, it makes my asthma worse.

At night I also take Singulair, a pill that helps prevent asthma symptoms by blocking the chemicals the body releases in response to asthma triggers. If I get sick, doctors will put me right back on prednisone, a powerful corticosteroid, to prevent my asthma from flaring up.

I have to take my bronchodilator inhaler with me everywhere, just in case of emergencies. I have one in the car, one in my desk, one in my purse, and one in my gym bag. I have to use it before I exercise and when I feel an asthma attack coming on.

A half-marathon helped me regain my health 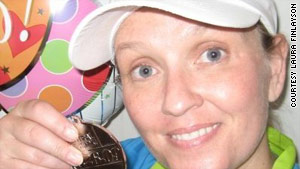 Laura Finlayson committed to running a half-marathon to help manage her asthma.

This was all a bit overwhelming, and it took me a long time to feel like myself again. I was feeling down -- I had been sick for six months, and I was completely out of shape.

I woke up on New Year's Day and decided to take my asthma into my own hands. It wasn't about losing weight, but about committing myself to achieving a goal. I saw a training program in a magazine for a half-marathon and signed up for it. I knew, even if I had to walk, that I would finish that race.

The first week started light; I could only walk for nine minutes and jog for one minute. But I figured it would be a good way to get back into shape as well as to take control of my lung function. I was determined to kick that asthma out of me. I had an attack or two in the beginning of my training and my pulmonologist was worried I was trying to push myself too far, too fast. He suggested I take it easy. But that's not really my personal style.

I was so nervous about the race that I ended up adhering to every training recommendation. The result? I felt great going into the race. The day was incredibly hot for April. Event organizers were hosing us off with fire hoses as we ran through New York City's Central Park.

I used my emergency inhaler before the race, as I do before any exercise, but I never had to use it during the race -- even though I had it with me the whole time, just in case. Afterwards, a friend said, "Don't you feel so proud of yourself?" I did, but at the same time, I didn't really think it had been as hard as I thought!

I'm not ready to stop my medications

Everyone thought I was insane, but I've kept up with the running. Since my first half-marathon, I've run three 10Ks and a four-mile race.

Running is definitely helping to control my asthma, although the medicines play a huge role as well. My lung strength and function is improving, but my doctor is not at all inclined to take me off any medications. However, I rarely have asthma attacks now.

I do have asthma triggers beside exercise. Seasonal allergies, particularly in the spring, can cause trouble. Even though I'm on a lot of medicine to control the allergies, when I get congested, the mucus drips into my chest and causes breathing difficulties.

I also react very strongly to specific allergens, like cats, or air pollutants, like secondhand smoke. I was recently in Detroit, where they still allow smoking indoors. I was in a casino for about 20 minutes before I had to go back to my hotel room; I was coughing so hard I threw up.

Despite these periodic breathing problems, I feel great. Mostly I'm happy that I've taken control of my health and my fitness. I've lost about 25 pounds and dropped a few sizes.

I've taken control of my own life by trying to build up my lung strength and function. There's only so much the medicine can do. I can't just sit back and wait for a cure.