When you're losing weight, where does the fat go? 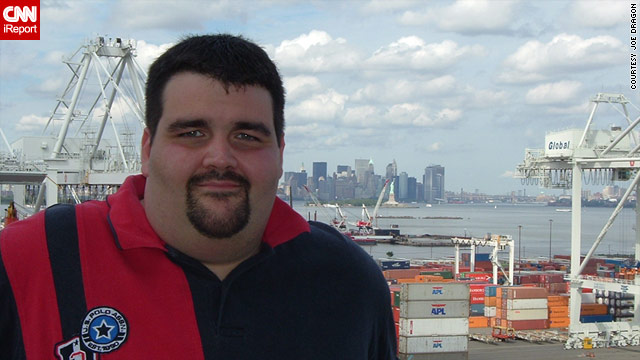 Joe Dragon lost 130 pounds. Scroll down to see what he looks like after his weight loss.
STORY HIGHLIGHTS
RELATED TOPICS

(CNN) -- Multiple chins, bulging tummies and flabby arms: It's easy to see where fat accumulates on the body.

When a person starts losing weight, where does the fat go? And what parts of the body can you expect to see results?

Headlines from fitness magazines promise exercises to blast away belly fat and activities to spot-reduce flab. The scientific evidence, unfortunately, doesn't back those sexy headlines.

Here are three things to know about weight-loss and body fat.

You can't change your shape, just your size.

You can't cherry-pick where you shed fat; weight loss doesn't work like a point-and-shoot.

MRIs, CT scans and dexa scans, which use X-ray beams to measure body composition, show no evidence for spot reduction.

"Basically, when we lose weight, we lose weight all over in exactly the proportion that's distributed throughout our body," said Susan Fried, director of the Boston Obesity and Nutrition Research Center at the Boston University School of Medicine. 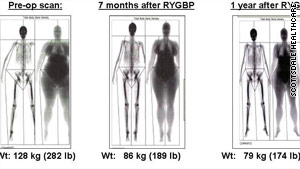 This dexa scan of a woman who underwent bariatric surgery shows where she lost her body fat.

A pear-shaped woman who loses weight will remain a pear, just a daintier one, say researchers who specialize in body fat. More women tend to be pear-shaped, with fat around their hips and thighs. Men tend to be apple-shaped, because they have fat that accumulates around their waist.

"People come in with unrealistic expectations from magazines and spot-reducing," said Gary Foster, director of Temple University's Center for Obesity Research and Education. "That doesn't happen. When you start to lose fat, it's proportionate throughout your body, whether it's your neck, waist, ankle circumference. You'll come out smaller but have the same body shape." 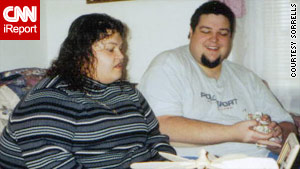 Maggie and Andy Sorrells in 2002, before the couple started a faith-based weight loss program.

That was the case with Maggie Sorrells, 37, who lost nearly 300 pounds through diet and exercise in less than five years.

Her body was pear-shaped even when she weighed about 500 pounds. She reduced her portion sizes and attended weekly faith-based weight loss meetings called Weigh Down. She noticed that her face and hips were getting smaller.

"It's crazy to think how much they've come down."

She and her husband, Andy, who live in Nashville, lost more than 500 pounds combined. 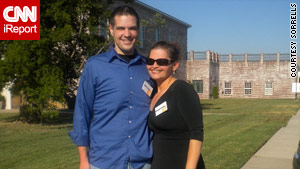 Maggie Sorrells said she essentially retained her pear shape, although she is 300 pounds lighter.

For most people, the problem is their weight, not their body shape, Foster said. Whether you're a pear or apple may be determined by genetics or hormones.

Not all body fat is created equal.

When Joe Dragon, an insurance company supervisor in Albany, New York, started losing weight from his 425-pound frame, he noticed the biggest difference in his stomach.

"I was never heavy on the bottom; it was more the gut, belly area," the 34-year-old said. "The differences I noticed, I have a flat stomach. It used to be huge round ball."

See his iReport: Joe from Albany 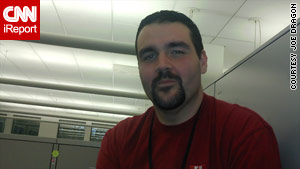 Like Dragon, men tend to be apple-shaped and carry more belly fat, known as visceral fat. This is a dangerous type of fat because it surrounds abdominal organs and is metabolically active.

Essentially, it disturbs the regular mechanisms in your body.

The fat cells release biochemicals that lead to inflammation, which could lead to heart attacks, strokes and joint and muscle pain. This accumulates in the liver, said Dr. Robin Blackstone, surgeon and medical director of Scottsdale Healthcare Bariatric Center in Arizona.

"Fat is basically a store of energy," she said. "When you need energy, you break down the fat. That breaks down into a component called free fatty acid and goes into the liver for energy. When you have a lot of excess fat, it generates so much free fatty acid, the liver can't handle it, so it stores it."

That triggers a host of problems including non-alcoholic fatty liver disease, insulin resistance and diabetes.

"Belly fat is much more harmful than the so-called big butt," Foster said.

The fat in the hips causes much alarm because that part of the body is highly visible. Called subcutaneous fat, the masses of this fat may be unsightly, but scientists believe they're not as dangerous as internal abdominal fat.

For cosmetic or social reasons, women are more likely to seek obesity treatment than men.

"What that says is that men are likely to need obesity treatment more than women, but women, likely due to stigma socially for being overweight, are more likely to present for treatment," Foster said.

Where does the fat go?

Fat cells expand when people consume more energy than they can burn. During weight loss, the cells shrink.

"The fat is a very specialized cell, and it takes basically the fat we eat and it stores it in form of triglycerides," said Fried, who researches how fat is deposited. "It's doing that for the purpose of releasing it when other parts of the body need it."

Humans carry about 10 billion to 30 billion fat cells. People who are obese can have up to 100 billion.

The size of the cells shrinks, but the capacity to expand is always there.

Liposuction can remove fat cells, but this procedure is ideally for people who are not obese.

"The fat cells are actually being removed," said Tony Youn, a plastic surgeon who performs liposuctions. "It doesn't mean that fat cells that remain can't get bigger."

Despite the extraction of fat cells, the ones remaining can always get bigger or smaller depending on a person's diet and fitness.