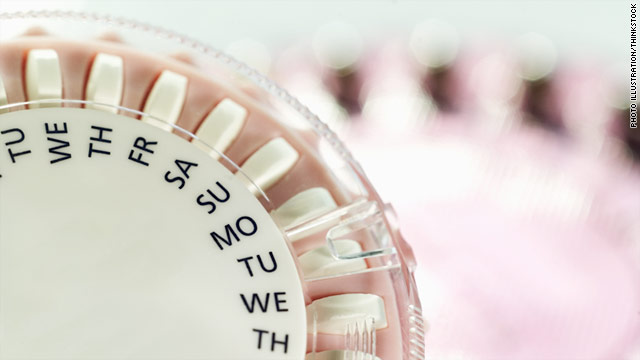 A new report recommends that birth control should be fully covered so "women can better avoid unwanted pregnancies."
STORY HIGHLIGHTS

(CNN) -- Contraceptives, sterilization and reproductive education should be covered by health insurance plans with no cost to patients under the health care reform law, a new report recommends.

The birth control methods, services and education should be available "so that women can better avoid unwanted pregnancies and space their pregnancies to promote optimal birth outcomes," according to a report from the Institute of Medicine, an independent, nonprofit organization that gives advice to decision makers and the public.

Under most health insurance plans, birth control such as hormone pills and implantable devices are partially covered, but require patients to contribute financially. If the Institute of Medicine committee's recommendations are accepted by the U.S. Department of Health and Human Services, women will no longer have to shell out co-pays, deductibles or other out-of-pocket fees for approved birth control or sterilization methods.

It's unclear whether HHS will implement the report's recommendations. That decision could come as early as August.

"We are reviewing the report closely and will release the Department's recommendations of what additional preventive services for women should be covered without cost sharing very soon," said HHS Secretary Kathleen Sebelius.

She called the IOM report "historic" and said its recommendations were "based on science and existing literature."

The IOM committee recommended that all U.S. Food and Drug Administration-approved contraceptives, including the morning after pills, should be fully covered by insurance plans.

Contraceptives can help families plan pregnancies, the report states. A national survey found that an estimated 49% of all pregnancies in the United States were unintended in 2001.

And women who have unintended pregnancies are more likely to have little or no prenatal care, and engage in risky behaviors such as smoking, drinking or experience domestic violence.

The direct medical cost of unintended pregnancy in the United States was estimated to be nearly $5 billion in 2002. The cost savings due to contraceptive use in that same year was estimated to be $19.3 billion, according to a study cited in the IOM's report.

Health care professional associations such as the American Congress of Obstetricians and Gynecologists, the American Academy of Family Physicians and the American Public Health Association already recommend the use of family planning services as part of women's preventive care.

Dr. James Martin, Jr, president of The American Congress of Obstetricians and Gynecologists, said the organization "really believes unimpeded access to affordable contraceptives for all women is foundational."

Martin, who practices in Jackson, Mississippi, noted that a substantial number of the pregnancies were unplanned and that some low- or middle-income women didn't have access to contraception because of cost.

Health plans covering an annual preventative care visit is also important, because that's when contraceptive methods would be discussed with a doctor, he said.

"Today's recommendation brings us a step closer to ensuring that all newly insured women under the health care reform law will have access to prescription birth control without out-of-pocket expenses."

But the topic of birth control and contraceptives remains highly sensitive because of personal or religious beliefs.

Jeanne Monahan, director of the Center for Human Dignity at the Family Research Council, said the group's chief concerns were what kind of birth control the plans would be required to cover.

Emergency contraceptives such as Plan B and Ella are taken after sexual intercourse to prevent pregnancy. Ella works primarily by stopping or delaying ovulation, according to the drug maker. Plan B uses a hormone found in birth control pills to prevent ovulation or interfere with fertilization.

Monahan likened the emergency contraception to an "abortion drug." The Family Research Council is a faith-based nonprofit.

"The overall question of mandating contraception, we believe that will inherently violate people's conscience rights," she said. "There are many people with conscience objections. They will be forced to pay insurance premiums which will ultimately cover these things that violate their conscience."

"The question is whether the government should mandate that every health plan will cover these drug costs. They shouldn't be forced to violate their consciences," Monahan said.

Although the recommendation on contraceptives is most likely to attract controversy, the IOM committee also suggested that the following programs be fully covered as preventive services:

-- DNA testing for high-risk HPV for women starting at 30 years of age; recurring every three years

-- Breastfeeding support and counseling, including costs of renting breastfeeding equipment

-- Screening and counseling for interpersonal and domestic violence

-- One preventive care visit a year for adult women