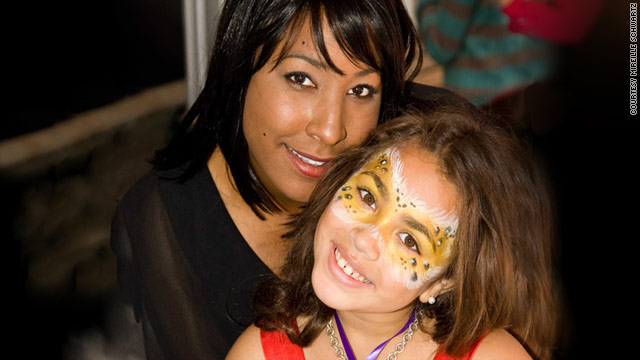 (CNN) -- Charlotte Jude Schwartz hates being allergic to peanuts and tree nuts but, thanks to her mother's creativity about food, it's not too hard to stick to her allergy-free regimen.

On Halloween in 2007, since trick-or-treating is challenging for kids with allergies, Mireille Schwartz rented a clear wedding tent, set it up in their cul de sac, decorated it like a haunted house and offered peanut-free and other allergy-sensitive treats. That way, anyone in the neighborhood could enjoy a party without worrying about getting an allergic reaction to those common candy ingredients

"After the tent had been disassembled, I lay in bed and I was thinking about other kids' Halloweens. And it just broke my heart," Schwartz said. "There had to be a way to keep children safe, and not just safe but enjoying and living vibrant and full lives."

The party became the seed of an idea that's become an important resource for food allergy sufferers in the San Francisco Bay Area. Schwartz started the Bay Area Allergy Advisory Board, which matches people living with food allergies with doctors who can provide clear diagnoses and recommendations. The organization covers the costs for these medical expenses, including prescriptions, and offers advice on how to make and buy safe foods in a cost-effective manner.

Schwartz is among many parents of food allergic children who are putting in extra time and money to make sure that their kids feel included in normal activities. Those costs are in addition to medical expenses related to serious allergies, including refills of prescriptions for lifesaving epinephrine autoinjectors.

Child food allergies on the rise

No one gets turned away, and some of the money comes out of Schwartz's own pocket. Charlotte, 11, also donates money to the cause from her allowance and dog-walking earnings. "There's so many people out there who have this problem, and if a dollar can help it, just one little bit, I'll give a million dollars!" she says enthusiastically.

On the national scale, Charlotte's pledge is only a fraction of the reality.

Between $340 and $510 million per year is spent in the U.S. on treating food allergy reactions, according to study in April in the Journal of Allergy and Clinical Immunology, funded by the Food Allergy and Anaphylaxis Network. This included emergency visits, office-based physician visits, and outpatient visits for reactions, as well as loss of earnings from not going to work to care for a sick child.

And that doesn't even encompass the day-to-day costs of specialty foods for people who can't eat just anything that comes out of a box.

With food allergies becoming more common and more severe among young children -- 8% of children under 18 in the United States have at least one food allergy, according to a recent study -- more parents find themselves having to invest in the management of food allergies, which involves much more than medical care.

Many parents report spending much more on food and cooking ingredients for their allergic children than the standard. Dr. Clifford Bassett, allergist in New York City, hears these complaints, too. His best advice is to be a "label detective" -- make sure you understand exactly what's in everything you eat, especially if it's pre-packaged.

"It's a whole lifestyle for the food allergy patient," he said.

Special staples, such as dairy-free butter or wheat-free flour, come at a premium, and the market for them is growing. It costs extra money to have facilities dedicated to making packaged foods where there's no possibility of allergens contaminating any given product. That's a cost that gets passed on to the consumer.

Gluten-free bread and pasta, which are designed to be safe for people with wheat allergies and celiac disease, are twice as expensive as their wheat-based counterparts, according to a 2007 study in the Journal of Human Nutrition and Dietetics. A 2011 study in the same journal found that all 10 gluten-free versions of wheat-based foods cost more than the standard versions.

At the same time, the demand for these kinds of products is growing. In natural supermarkets, from June 2008 to June 2010, sales of products who labels said they were "free from" particular ingredients increased 31%, from $210.6 million to $276.4 million, according to market research company Mintel Group Ltd. Those numbers exclude Whole Foods Market and private label retailer brands.

A key area of concern for people with food allergies is baked goods. In regular bakeries there seem to be endless opportunities for cross-contamination; a chocolate chip cookie may have been baked alongside a walnut cookie, or stacked on top of one afterwards, or removed with the same spatula that touched the walnuts.

Sure, cookies and cakes aren't necessities, but when your child wants something that other kids have, it's hard to say no, mothers of food-allergic children say; it becomes a quality of life issue to have your child feel included.

Clowes estimates she spends about twice as much as the average mom on food because of the special brands that she buys from, in addition to organic products.

To have a party for her child, Clowes needs to get special cake mix, dairy-free milk and margarine, and special ice cream.

"You hate to hear about a child who can't have a birthday cake because the parent can't afford" these items, she said. "There are people out there where that's real of a stretch for them."

Schwartz likes to modify recipes for Charlotte's treats. For instance, she'll use roasted sunflower seeds instead of walnuts in seven-layer bars and sunflower seed spread for chocolate-peanut butter cups.

Some parents have to make major lifestyle adjustments to ensure the safety of food-allergic children.

Keaton left her job at IBM when her first son, Daniel, was born. The boys showed signs of allergies from very early in childhood; it would have been difficult to return to work, given how involved allergy management turned out to be, she said.

"There's the preparation time of cooking, packing lunches for them, also being available for school functions," she said. "Throughout the preschool and elementary years, I pretty much wanted to be at every school party and every school field trip."

With Jeremy, a doctor recommended that he not attend preschool because of his many allergies, but Keaton still wanted him to have the experience. So, with the cooperation with the nursery school, she went with Jeremy every day to ensure his safety.

"I always wanted them to participate in whatever they wanted to, really, and be with their peers," Keaton said.

She volunteered a lot with the school so that she could develop a good relationship with their teachers. Today, she's a facilitator for a local food allergy support group, the Metro DC Food Allergy Support Group, which she founded. It has nearly 300 families in its membership.

As for Charlotte, she's serving as an adviser and party planner for her mother's organization. Occasionally she gets tempted by items in the vending machine, but she knows how important it is to stay away from potentially dangerous foods.

"It's very difficult. A total drag. But if it's a drag and I can stay safe, I'd want that instead of having it be not safe and it being easy," Charlotte says.