Heatstroke: A deadly hazard of summer 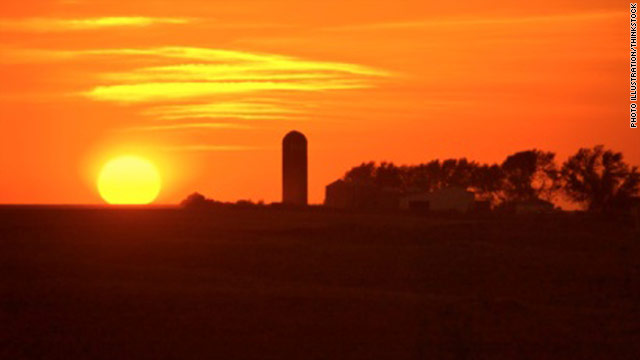 To avoid heatstroke, avoid strenuous physical activity outside during the hottest time of the day, if possible.
STORY HIGHLIGHTS

(CNN) -- Michael Musick is all too familiar with the toll heat can take on the human body.

He was helping his father put up hay on their family farm three weeks ago when his vision began to blur. His legs became weak and his muscles cramped.

"If you keep pushing it, after you see the stars, then everything goes black and you pass out," said Musick, 46, who lives on a farm near Honaker, Virginia. This was the third time in five years that he had a heat-related illness, but this was the most severe. This time, he passed out twice.

"It's pretty classic for folks. If they continue to have episodes of heat-related illness, they usually get worse each time," said Dr. S. Hughes Melton, practicing physician in Lebanon, Virginia, who treated Musick for heatstroke.

The risk of heatsroke is up this week because of heat wave across the nation. Twelve states are under heat advisories from the National Weather Service as of Wednesday, including Musick's Virginia. And even areas of the country that aren't under heat advisories, such as Newark, New Jersey, and New York's JFK airport, hit record highs Tuesday.

"When you have the kind of heat wave that we're having now, we start to get worried," said Dr. Janyce Sanford, chair of emergency medicine at the University of Alabama, Birmingham.

This summer's heat has already claimed at least one life: a 51-year-old man in Granite City, Illinois, died because of excessive heat, according to the Madison County coroner. He was found unresponsive in his mobile home, where the air conditioner was not working, according to CNN affiliate KMOV. The preliminary cause of death is heatstroke.

Between 1999 and 2003, there were 3,442 reported deaths resulting from exposure to extreme heat, according to the U.S. Centers for Disease Control and Prevention. During that time Arizona had the highest number of deaths related to hyperthermia, which happens when the body overheats (heatstroke is a form of it), followed by Nevada and Missouri.

Elderly people and young children, as well as people with chronic severe illnesses, are at highest risk of heatstroke.

Heat hurts your insides too

There are a few different forms of heat-related illnesses.

Heat cramps are usually considered mild, and can be treated with liquids and going into a cool environment. More severe is heat exhaustion, which involves elevation of body temperature, headaches, nausea and vomiting.

And then there is heatstroke, which is the most life-threatening. Heatstroke resembles heat exhaustion but may additionally involve neurological symptoms such as confusion and dizziness, or even coma. The body can no longer sweat, and internal temperature skyrockets.

Geoff Stoker, 24, remembers sweating profusely at soccer camp in high school and then, after three days, the sweating stopped altogether. He lost desire to eat, and vomited. His father, a surgeon, treated him for heatstroke at home, and he had no long-term side effects.

In Musick's case, the heatstroke temporarily diminished his kidney function to about 50%.

Patients may also lose water weight through dehydration, said Dr. Sylvia Morris, hospitalist at Emory University Hospital Midtown in Atlanta, Georgia. A hospitalist is a physician whose focus is patients within a hospital.

Sanford's hospital typically sees one or two chronically ill elderly patients who live without air conditioning and develop heatstroke in any given summer. But she believes the South sees fewer cases because people in that region are more acclimated to high outdoor temperatures; they're more used to having to deal with heat than in other parts of the United States.

In severe cases, patients must be admitted to the intensive care unit, where medical staff watch body temperature carefully. A 48-hour hospital stay would usually be necessary, Sanford said.

"If you can get them to treatment fairly quickly, they'll survive it," Sanford said. Chronic illnesses can complicate recovery, however.

Treatment focuses on cooling the patient down to a normal body temperature. If the patient has a clear airway, breathes normally and has normal circulation, medical staff will remove his or her clothes and spray cool water while a fan is blowing, Sanford said. Cool intravenous fluids also bring body temperature down.

Musick's wife Teresa, recognizing heatstroke symptoms, drove him to the hospital when she noticed that his speech was slurred and his blood pressure was dropping. The emergency room staff gave him an IV, and the next day he followed up with Melton, who gave him two more IV bags.

"His body is not able to cool itself effectively, and so for him, he needs to avoid prolonged working in the heat. That's really his only option at this point, because I don't think his body will adapt," Melton said.

To protect yourself, try to avoid strenuous physical activity outside during the hottest time of the day -- between 10 a.m. and 6 p.m.

People who must work outside should make sure they drink plenty of water every half-hour or so and take breaks in a cool environment if possible, Sanford said. Wearing lightweight, light-colored clothing and a wide-brimmed hat can also help.

You can tell if you're dehydrated by looking at your urine, Melton said. If you've had adequate amounts of water, your urine will probably look light in color; darker means you should drink more.

And make sure you check on the elderly, especially if they don't have air conditioning, Morris said. They should spend time in cool places such as a library or a mall to get a break from the heat, she said.

Kidney, liver and heart problems are all conditions that should make patients extra aware of the heat, and they should talk with their doctors about heat exposure, said Morris.

"People tend to forget to drink. By the time you're thirsty, it's really too late," Morris said.

Musick said his problem is that he doesn't like to drink water so much, and his hydration concerns his wife. But over the past three years he's made an effort to get at least 8 glasses a day in his system.

Since his most recent heatstroke, he's been resting and hasn't been out on the farm.

"I am really pushing the hobby of farming to be retired," Teresa Musick said.