Astronaut-climber: 'I'm not a risk taker' Only man to climb Everest, go to space
STORY HIGHLIGHTS

Dr. Scott Parazynski (yes, he's an M.D., too) has seen the planet from heights most people only dream of. Now he's back on the ground lending his expertise to earthly research on relatively tiny scales as chief medical officer and chief technology officer for The Methodist Hospital Research Institute in Houston.

"I've gone from outer space to inner space, now working on things that are of a much smaller, more focused nature," Parazynski told CNN earlier this week.

The highly anticipated launch of the final shuttle in NASA's 30-year program, scheduled for Friday, is bittersweet for Parazynski, who spent 17 years with NASA. There's still some reason for enthusiasm, as private enterprise steps up to launch flights into space, he says. But he's also concerned that NASA doesn't have a clear exploration mission.

"I think we should be setting our sights on an ambitious goal like Mars and funding it appropriately," he said. "I can't think of a greater goal for humanity now."

Parazynski, who turns 50 this month, started young in his adventure planning.

He had model rockets and space posters on the walls. His father worked on the Apollo program; Parazynski remembers him bringing passionate scientists home for dinner. "I thought, I need to be involved in some way," he said last fall.

When he was 5 or 6, he read about the first pioneers to climb Mount Everest. He started rock climbing around 15. It became an interest that turned to higher and harder mountains.

As for medicine, he never knew his physician grandfather, but the way others in his family spoke of him was inspirational.

"I thought, that would be a great way to live a life of service to others," he said. "I also thought of it as a pathway to space."

So Parazynski has gone where few humans have gone before -- and he studied all his challenges extensively before attempting them.

"I'm not a risk-taker, and that might come as a surprise. I'm not a daredevil," he says. "I manage risk, and I treat the things that I do very, very seriously."

As a shuttle crew member, Parazynski was a jack of all trades. He was the crew medical officer, but also had responsibilities as a shuttle flight engineer, the lead spacewalker, assembly and maintenance work, and operating different payloads, robotic arms and more. 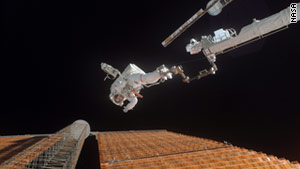 When Sen. John Glenn returned to the role of astronaut on a 1998 shuttle mission, Parazynski served as his personal physician. There were a number of life sciences experiments on the flight, and some required drawing blood from the senator. "He was a good sport about it," Parazynski said.

Spending time above the planet has changed Parazynski's view on everything from relationships to conservation efforts.

"It's impossible for an astronaut to go into space and not come back, to some degree, an environmentalist," he said. "You see how beautiful and fragile and unique the planet is, in the entirety of the universe, and you want to do what you can to champion conservation efforts."

At Everest base camp, at 17,500 feet but still 2 miles below the summit, most people would just turn around. But if you do a step-by-step process, it becomes a manageable challenge, Parazynski says. Having tangible goals along the way can help you get to the ultimate prize.

The first time he attempted Everest, he woke up one morning with excruciating back pain, having already spent two months on the mountain. He forced himself to turn around, and came down to have surgery to remove a disc fragment that was impinging on nerve roots.

A year later, he tried again, terrified. "I've had this one injury, what if I do it again? Or what if something else happens?" he feared. "Up until that very summit day, I wasn't all that convinced that it was going to happen."

It was one of the greatest challenges of his life, and he thinks about it every day. "It gives me a lot of strength in all the other things in my life," he said.

When Parazynski retired from NASA in 2009, he went to work for a major aerospace company and remained involved in the space program. But he started thinking about going back into medicine when he attended TEDMED in October 2010. At this gathering of some of the most interesting and creative minds in the field today, Parazynski started thinking about ways he could contribute to medical innovation, too.

And he's still consulting with private companies looking to take astronauts and tourists into space.

Parazynski says he'd like to continue to climb, but probably won't be attempting the world's highest peaks again anytime soon.

"What I'm most interested in right now, actually, is taking my son, who really likes to hike and climb, and sharing the mountains with him. That's the next big chapter in my adventure life."

The future of space travel

"I'm hopeful that we keep funding the International Space Station and then develop a long range plan that will leave the U.S. and NASA in a leadership role for exploration," he said.

Parazynski says he's a firm believer in a hybrid program of robotic and human space missions. Humans get sent into space to make real-time decisions and make observations that, at least at the moment, technology cannot make with robots alone.

"I think it's only human destiny we'll ultimately go to places robot probes have already gone," he said.

Sending humans to Mars, which Parazynski still hopes will happen in his lifetime, is such an expensive endeavor that it wouldn't happen through private enterprise, and it wouldn't make sense financially, he said.

Private enterprise is going to be focused on tourism, and it is getting less expensive (although still inaccessible to most). The price is about $200,000 per person, which will probably soon come down to $50,000 for the opportunity to get 100 miles up.

Eventually, commercial spaceflight could become a means for rapid international travel -- a jaunt from Philadelphia to Tokyo in 45 minutes, for instance.

Will Parazynski go back in space?

"The more I see the industry evolving and the opportunities increasing, there's a pretty decent chance that I'll get back," he said. "The desire is still there."